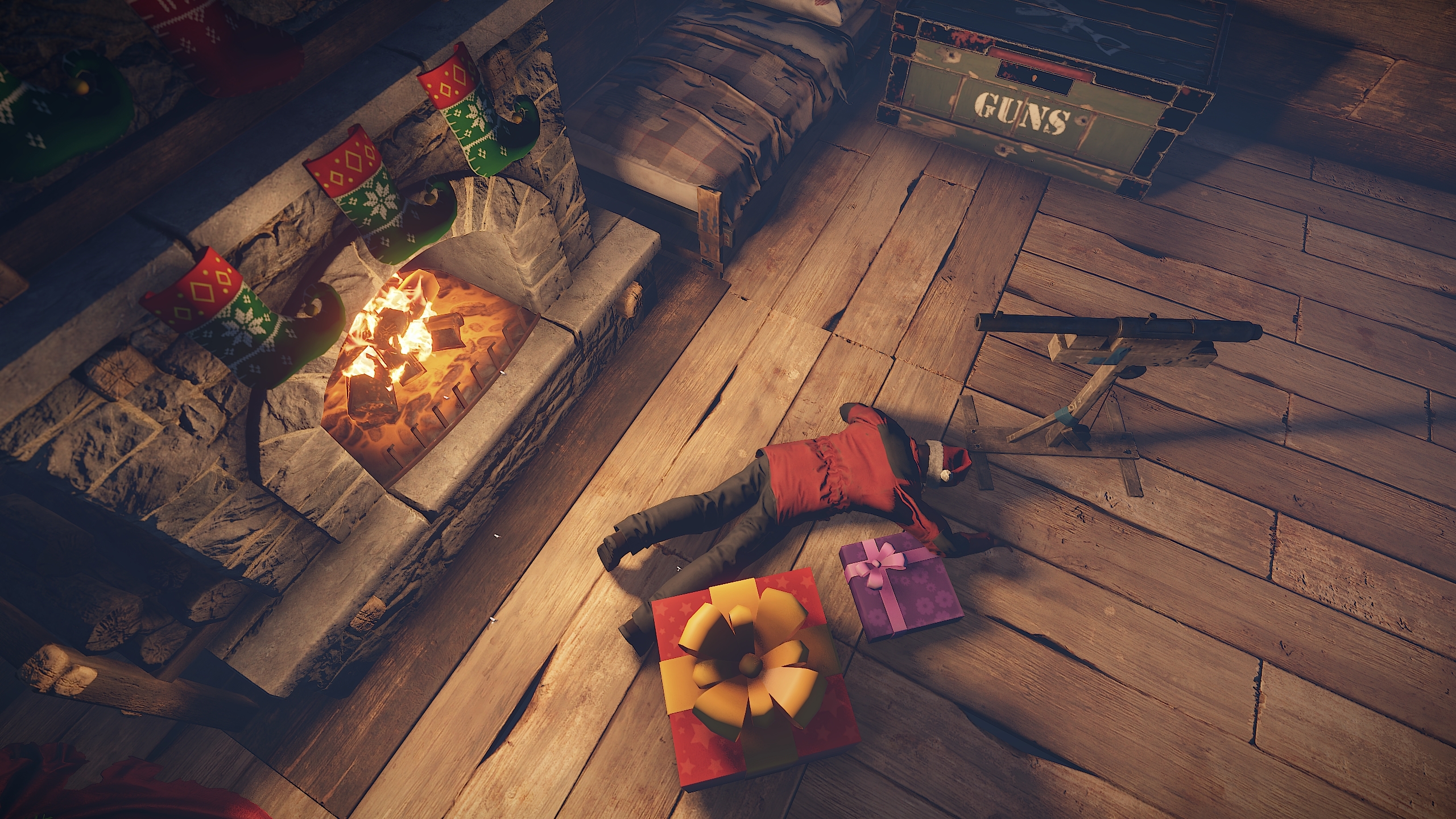 Ho-ho... no! Before he was murdered, Santa delivered some treats: weapon admire animations, night-time changes, a new flashlight, flares and more. This is it for us for 2017, we'll see you next year. Happy holidays!

Weapon Admire Animations
Thanks to Alex Webster's hard work over the past month, we now have a nearly complete set of weapon admire animations. You can press the examine key to take a look at your weapon and/or skins. Default key is 'N', though you may have to bind it manually in the options menu. 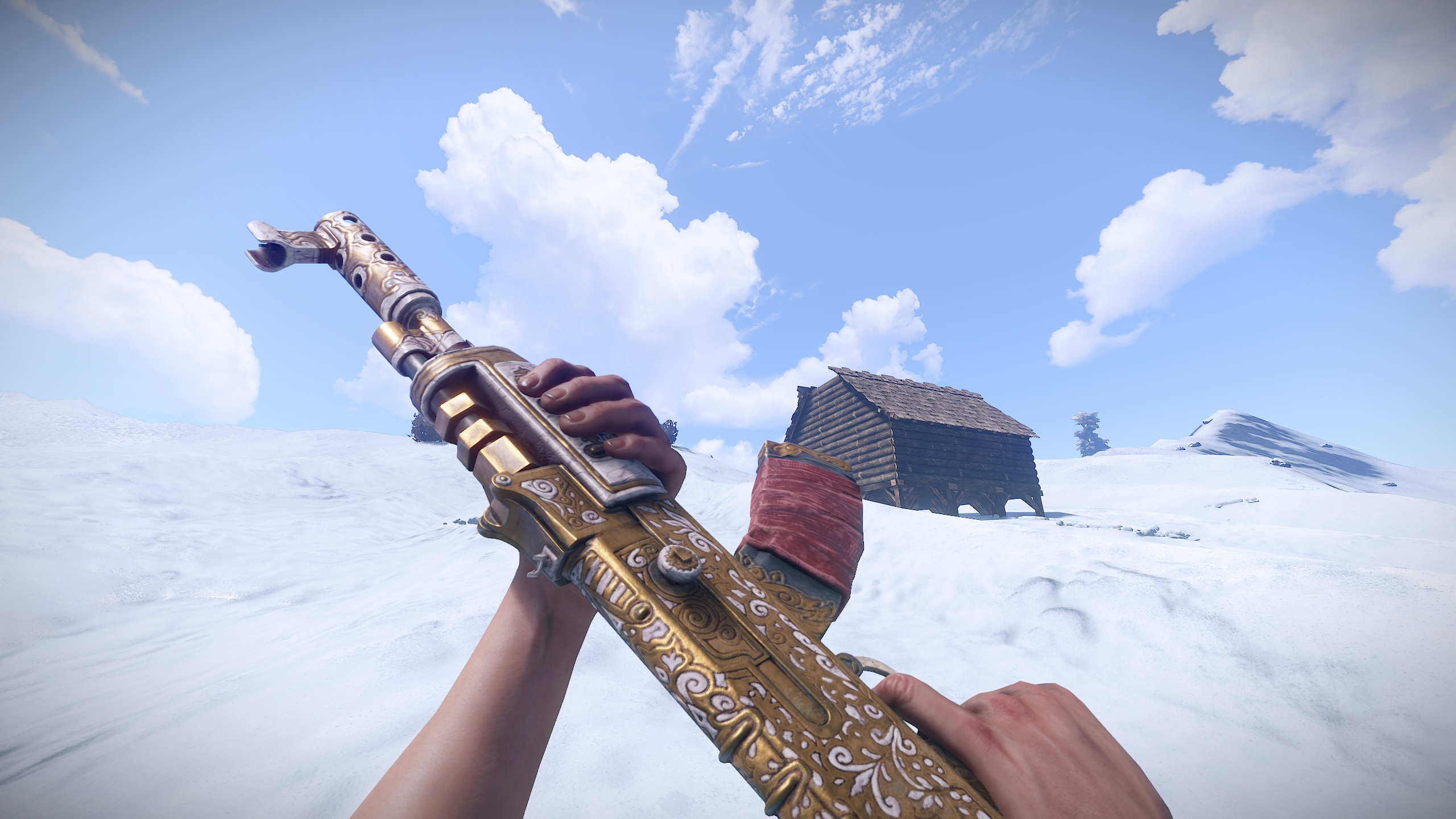 Upkeep Changes
I took a peek at a few bases and noticed that their upkeep costs were slightly higher than predicted. I've made a few changes to address this.

Tier 2/3 upkeep costs have been increased by 50 blocks respectively. This means that you can add another 50 blocks before your base is considered a higher tier and thus 'taxed' at a higher rate, which means you get a little more leeway with constructions of modest sizes.

Let's see how this plays out and we will revisit things if necessary in the new year.

Upkeep Notifications & Help
Something that should have been in game the day we implemented upkeep has been completed: you'll now see a status indicator which gives you easy to read information regarding the status of your building. If it's decaying, a bright red indicator will let you know. If it's not, a green indicator will give you a rough estimate of how long is left, so you don't have to constantly visit the TC to figure it out.

These status indicators are only visible if you have authorization for the Tool Cupboard in question, so enemies won't be able to get this information.

I've also added some game tips which will pop up and remind to you not only craft a tool cupboard, but to place items inside it if you haven't. If you're a veteran player, don't worry. You'll stop seeing these tips after you've opened the tool cupboard 10 times.

Lastly, if you hover over the 'Cost per 24 hours' text, you'll get a small tooltip letting you know the upkeep rate and how many blocks you have placed. 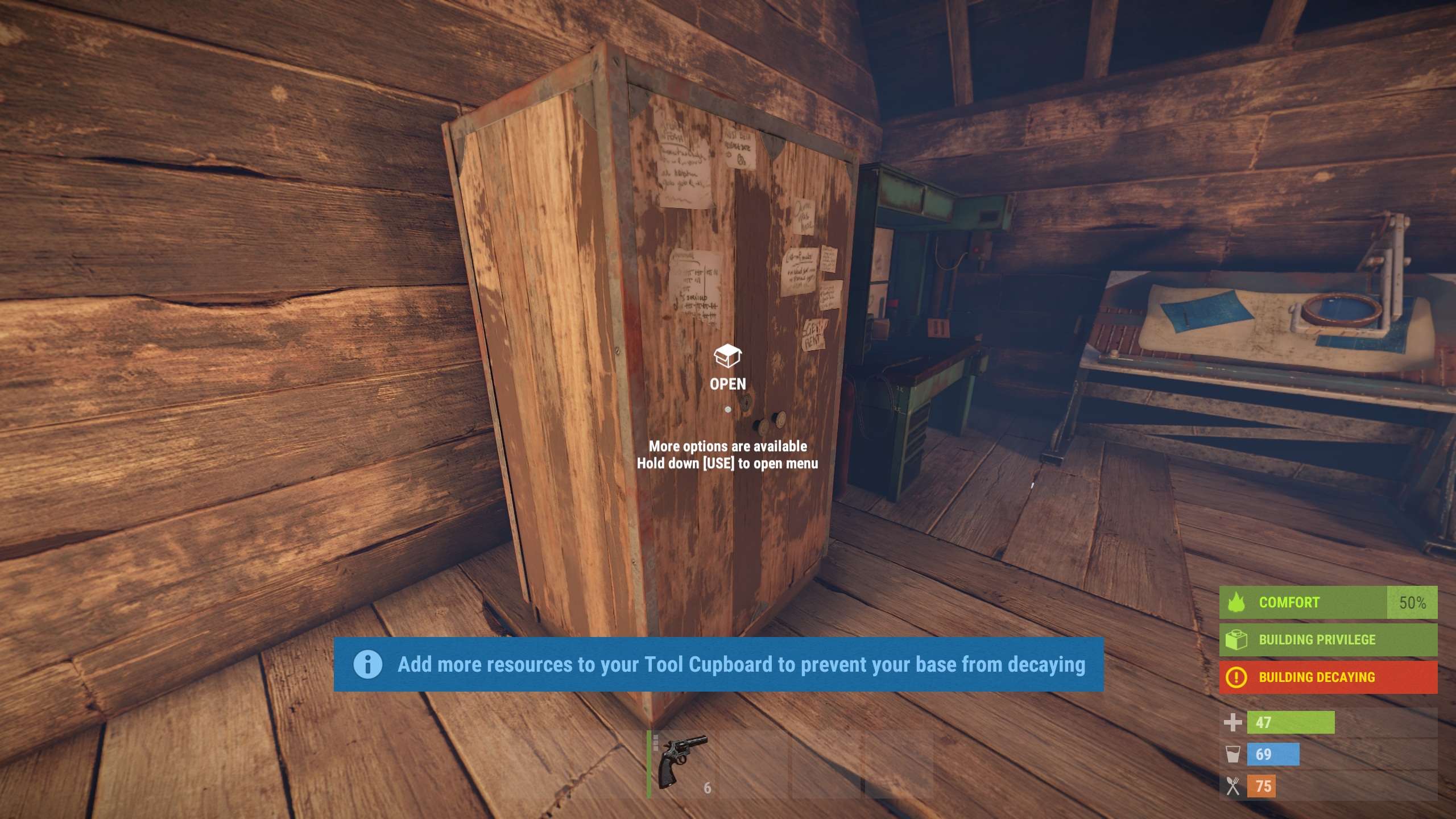 Flashlight
I grabbed some low hanging fruit this week and tasked Minh Le with updating the ancient flashlight model/animations we've had sitting around for 2 years. The result is a handheld flashlight item that you can also use to bash heads in. It's a common drop, doesn't cost that much to craft, and will yield a pretty significant amount of illumination. Enjoy! Flares
Ah, I remember these... they were one of the first items I implemented in Legacy. Well, they're back! Found in basic crates and caves, you can throw these flares like a grenade and have 2 minutes of reddish illumination. Enjoy! 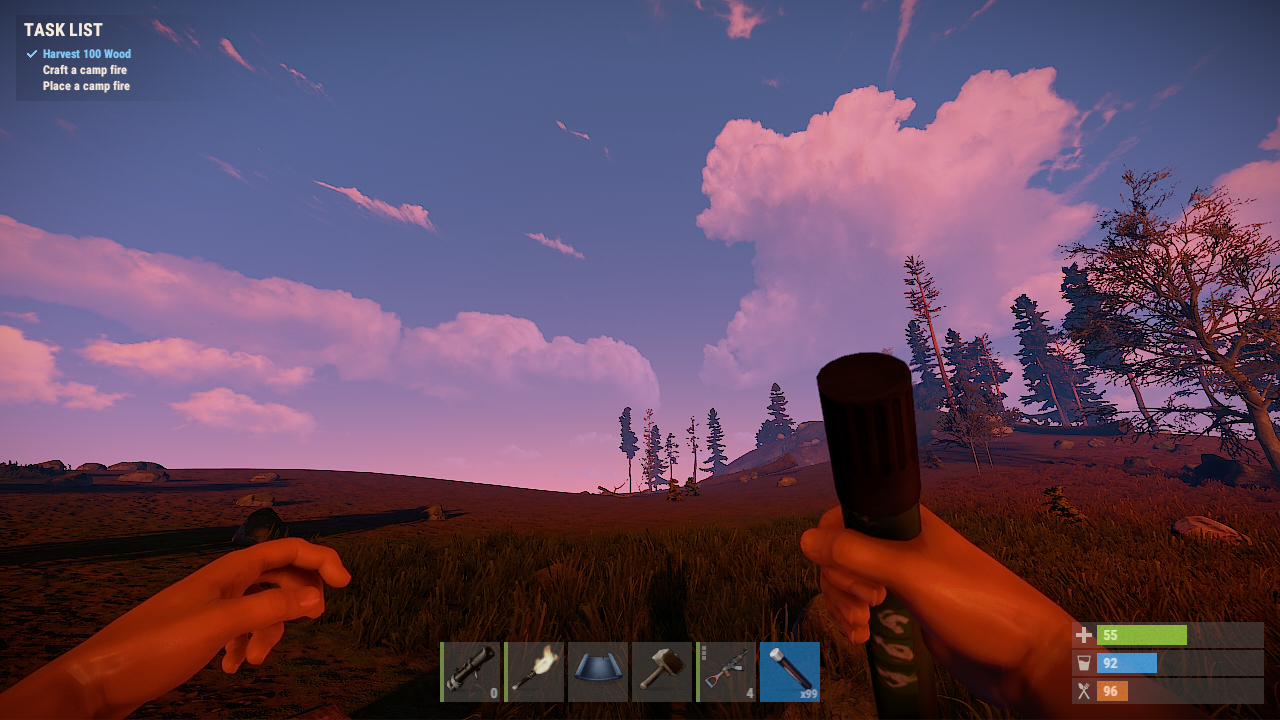 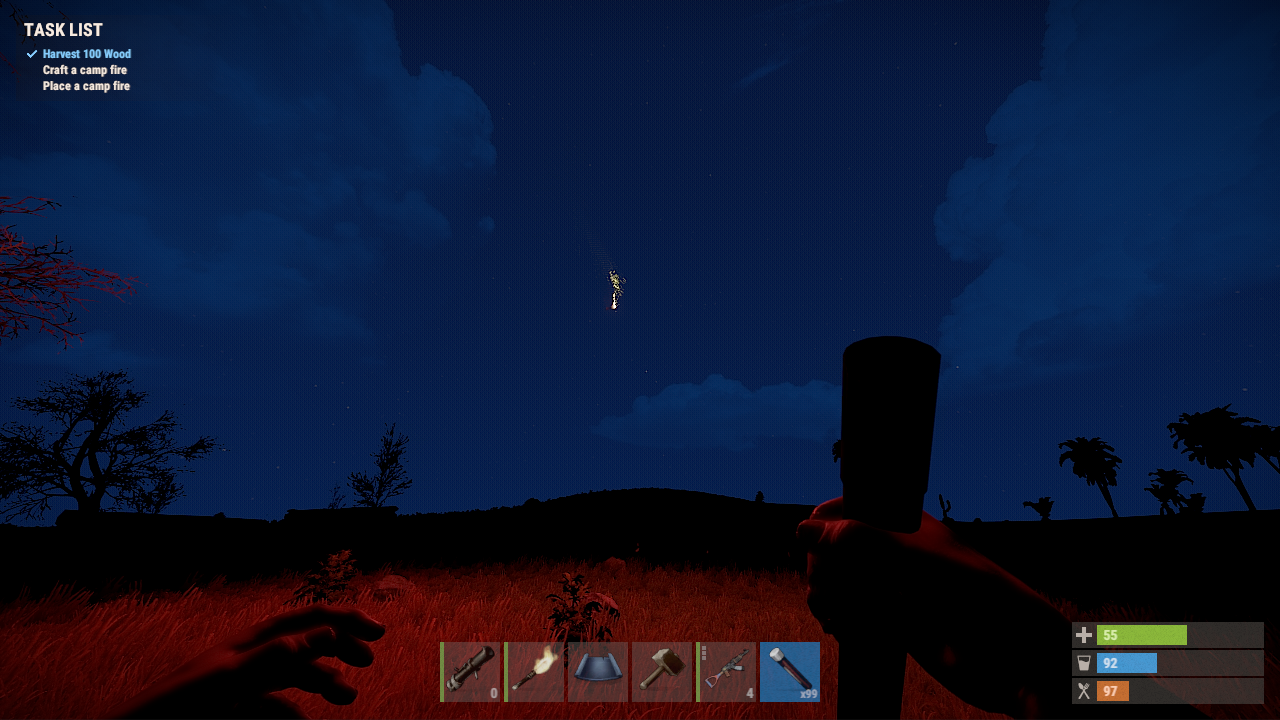 Bonus Door Garland
We ran out of time last week, so I was unable to implement the last piece of Christmas content: a Door Garland. I finished it up this week and it is now craftable if you own the Window Garland Steam item from last week... I hope. We've never set it up where a single Steam item unlocks multiple in game items, so fingers crossed. Better than being a separate purchase though, eh? 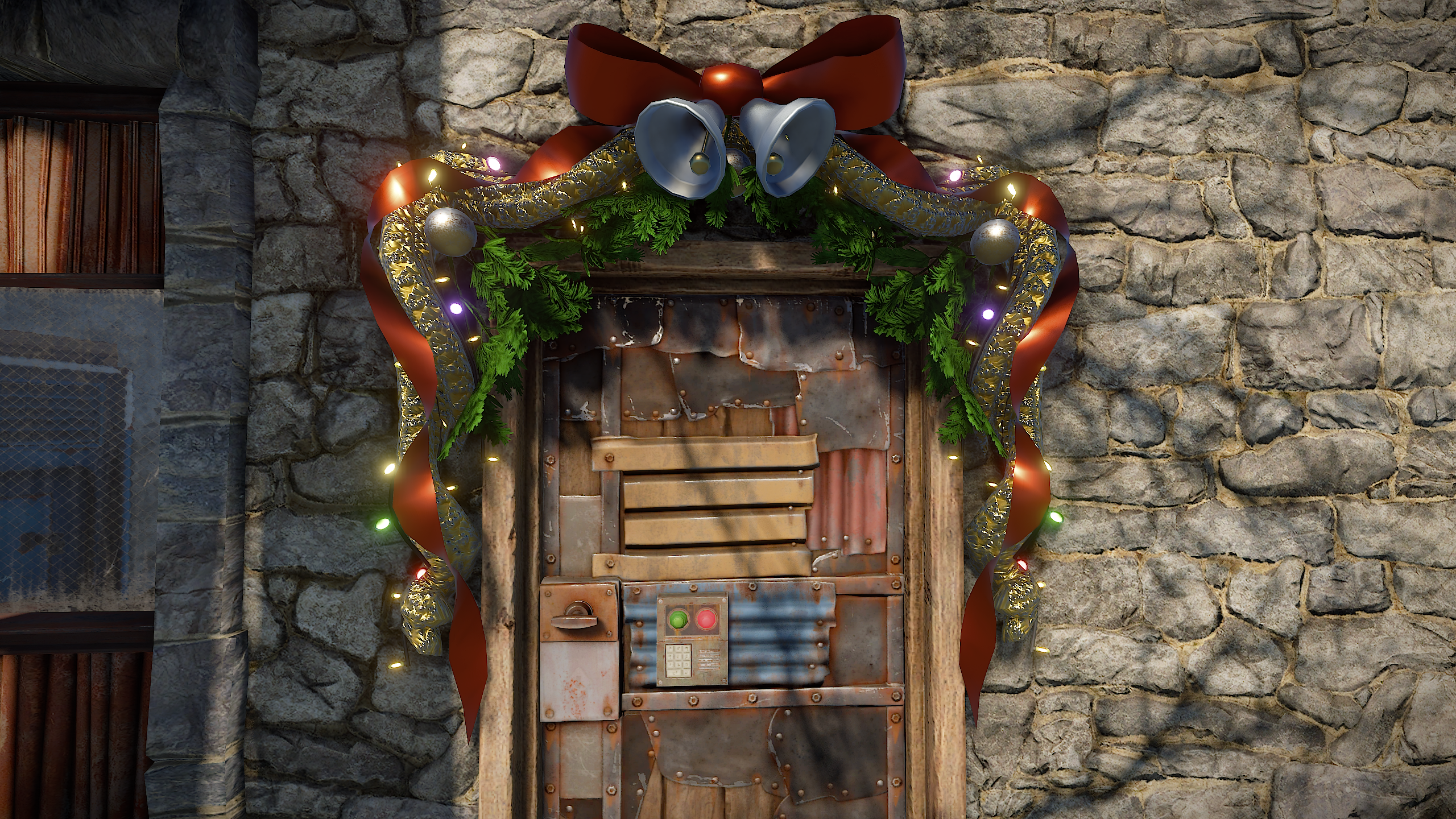 Beam Fixes
The old code that handled beams was leaking memory, so it was commented out. I finally got around to fixing it so you'll once again see beam effects. Most noticable with Flashlights and Ceiling Lights, and you'll see a line drawn from emission point to end point for the laser sight. Crossbow Flashlight
After fixing some model heirarchy issues, the crossbow is now capable of taking a Flashlight Modification. It is also capable of taking a Laser Sight Mod, but I wouldn't recommend it as it doesn't point anywhere near where the arrow will go. We will fix this sometime next year. Darker Nights
You may have noticed some activity regarding night-time changes these past few days. The changes we're introducing are not merely aesthetic. Night-time has been historically unbalanced due to players abusing gamma hacks and we're trying to mitigate that.

Please note that, while moonless nights became pitch black, moonlit nights actually got a little brighter in order to discourage gamma hacks. This is what we thought would be a decent way to approach the problem. We want to encourage players to prepare for night-time and be assured that the conditions are the same for all players.

We're not done tweaking this yet. This is a first run to see how it all plays out so you can expect tweaks and balancing changes in the coming weeks.

Make sure you stock up on lighting items to survive the pitch black night.

Occlusion Culling Predeployment
We've been testing this feature on staging on and off over the past couple of weeks, but due to our short iteration times, and other limitations, we haven't been able to test for periods longer than a couple of days. We're pushing occlusion culling today to perform wider scale testing.

This is a critical feature that, if failing even in some cases, can be a serious source of exploits and gameplay problems. It's also complex enough that it requires a lot of testing and runs mostly on the GPU so it's important to have various results from players using all kinds of operating systems, hardware and driver configurations.

Unfortunately we don't get that many players on Staging so we need to make a push today to see it's stable enough for permanent deployment. If any problems are detected we will roll it back as soon as possible via client update.

We are enabling it by default "culling.env 1" but the var is unsaved. If you detect any issues simply disable it using "culling.env 0" on the console then please let us know via usual channels (e.g. comments, reddit, twitter). 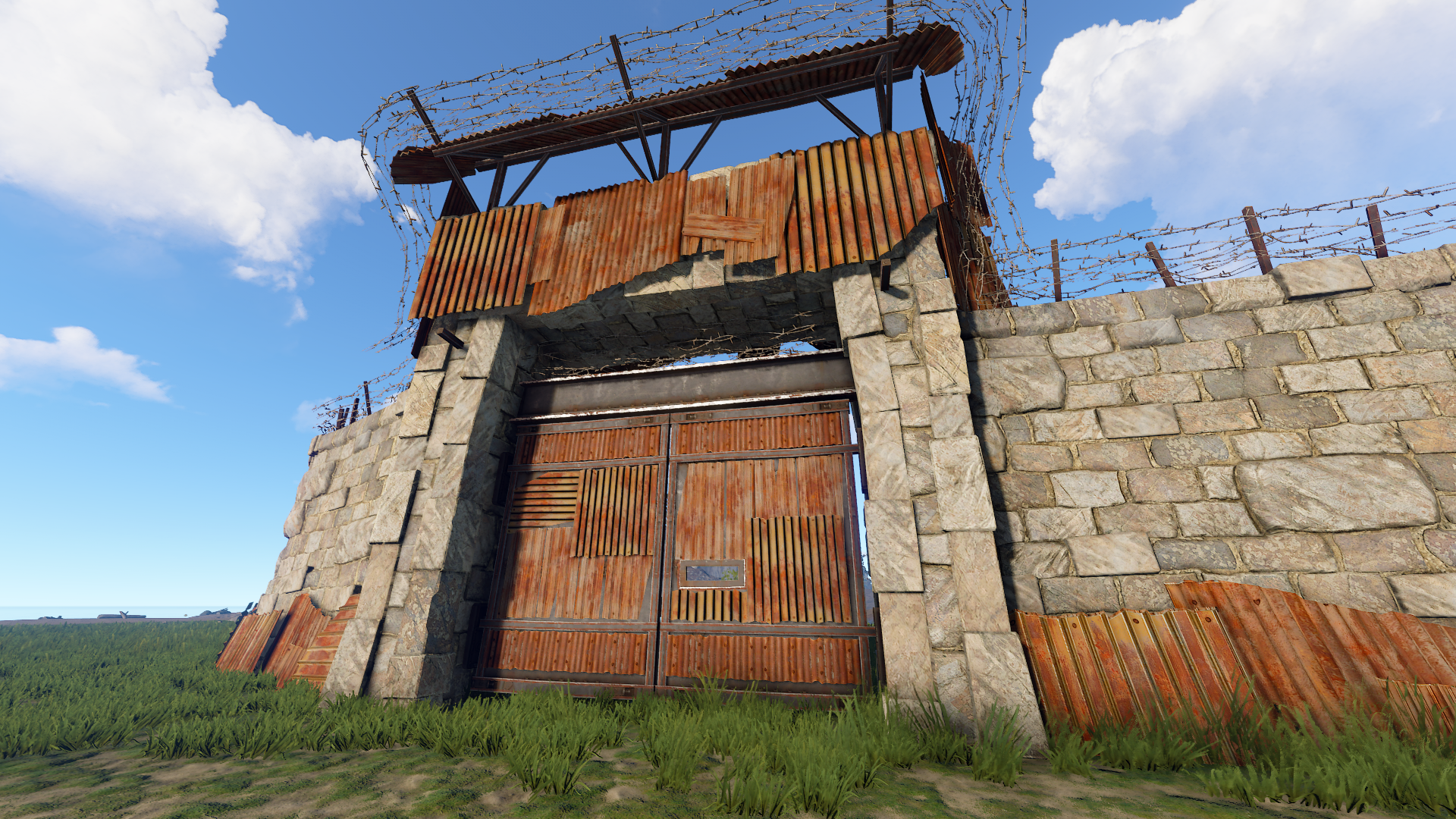 Cave Fog
There was a bug that would sometimes still render fog inside caves that could be abused to navigate them without a light. This is now fixed. Error Fixes
With the massive content push we've gone through over the last months we introduced a number of client and server errors that could get spammed under certain conditions, particularly on modded servers. I went over the most common ones and fixed them.

Downed Player Collision
You know how downed players would still have their collider enabled, which would sometimes block off doorways? This is now fixed. You can now trample over people that are downed instead of helping them up or killing them. Roof Conditional Models
There have been a number of issues with the roof conditional models that have gotten even worse as the building system evolved. I've fixed the majority of those problems this week. Although they're not perfect just yet, the big problems have been solved. Here's to hoping I'll find the time to re-add the wall corner pieces and other conditional models in 2018. 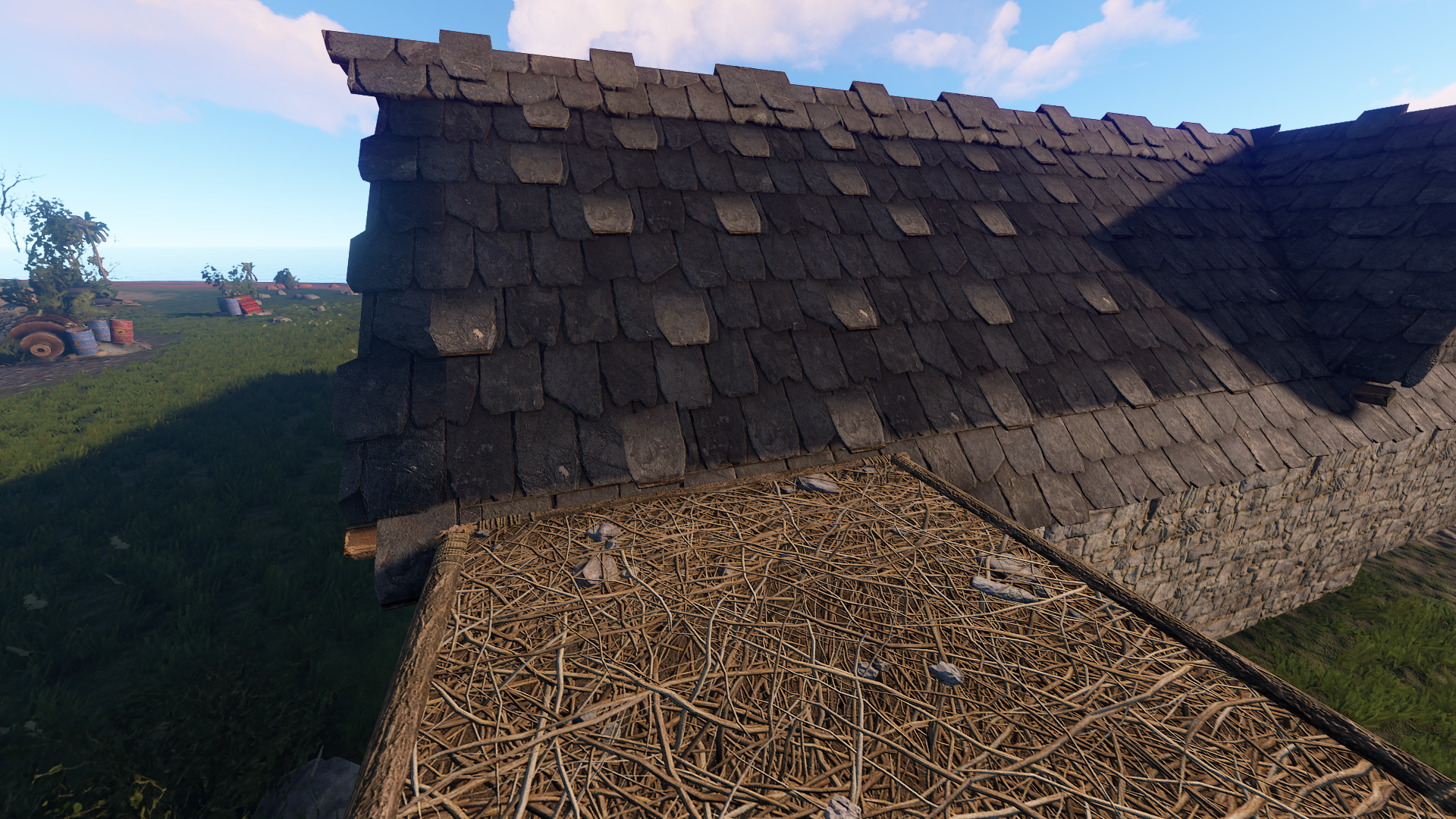 Upkeep Timer Serialization
When building blocks pay their upkeep they're safe from decay until the next payment is due. Since they cannot pay fractions of a resource it usually means they pay more resources than required for the current upkeep period in order to prevent exploits. To make this fair, their next upkeep period is prolonged by the amount they overpaid to ensure you don't have to pay more than is due. This prolonged period is now saved when the server restarts to ensure it's 100% fair. This really doesn't change all that much since the amount that was overpaid is always really low (i.e. less than a single resource) but it's good to have this fixed for servers that restart a lot, like our staging servers.

Building Supplies Loot Box
I finished the last of the loot boxes, the Building Supply loot box. As it implies, these crates will contain building material specific loot for you to gobble up! Despite the Christmas break, I made some progress on Paul's chainsaw concept.

AI
This week's patch has mostly been tweaks to animal behaviour and navmesh obstacles, like foundations. High walls have thicker obstacles to prevent animals from attacking through them, and ores are no longer a safe haven from animal attacks. The majority of my workload this week has been on the Scientist NPCs, but they are not ready yet.

Deployable Sounds
All the new deployable sound stuff I've been working on is pretty much done now. There's one or two one-off bits left, like a little squeak when a ceiling light swings around, and a sound when you grab a searchlight to start aiming it, but the core stuff is all sorted now.

Third-Person Melee Sounds
I've started working on improving parity between the sounds you hear in first person and the sounds that play when other players are looking at you this week, and I'm starting with melee weapon swings.

Water Effects
I created some new sprites and special effects for when the player steps in water.

I also redid the particle effect for vehicles driving in water, as some of the previous work I did on it looked far too thin when viewed at certain angles.