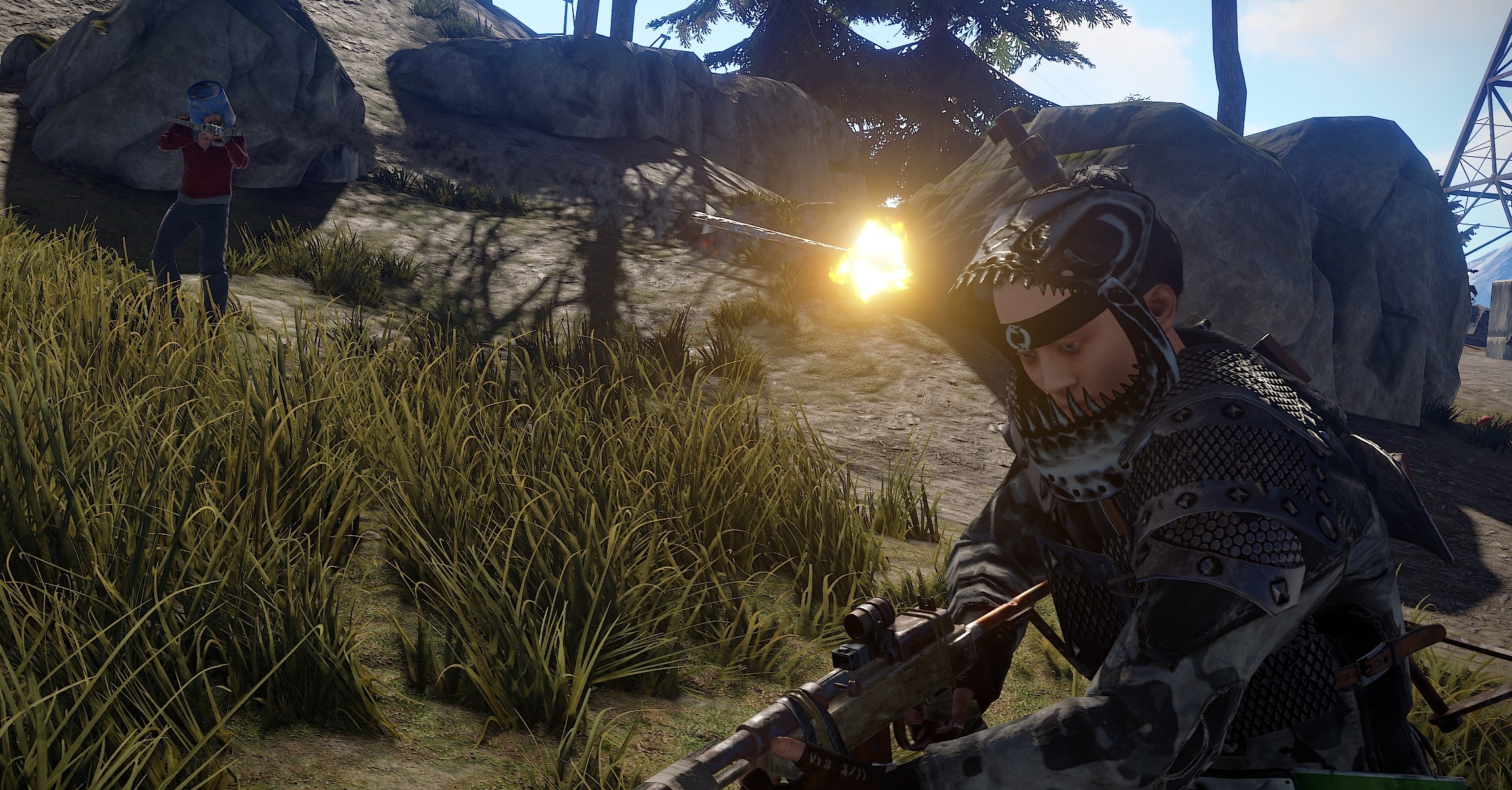 Bone arrows travel slightly slower and do less damage, but are way, way, waaay easier to hit people with. Their bounding box is 3x that of a regular arrow. These are a default blueprint. 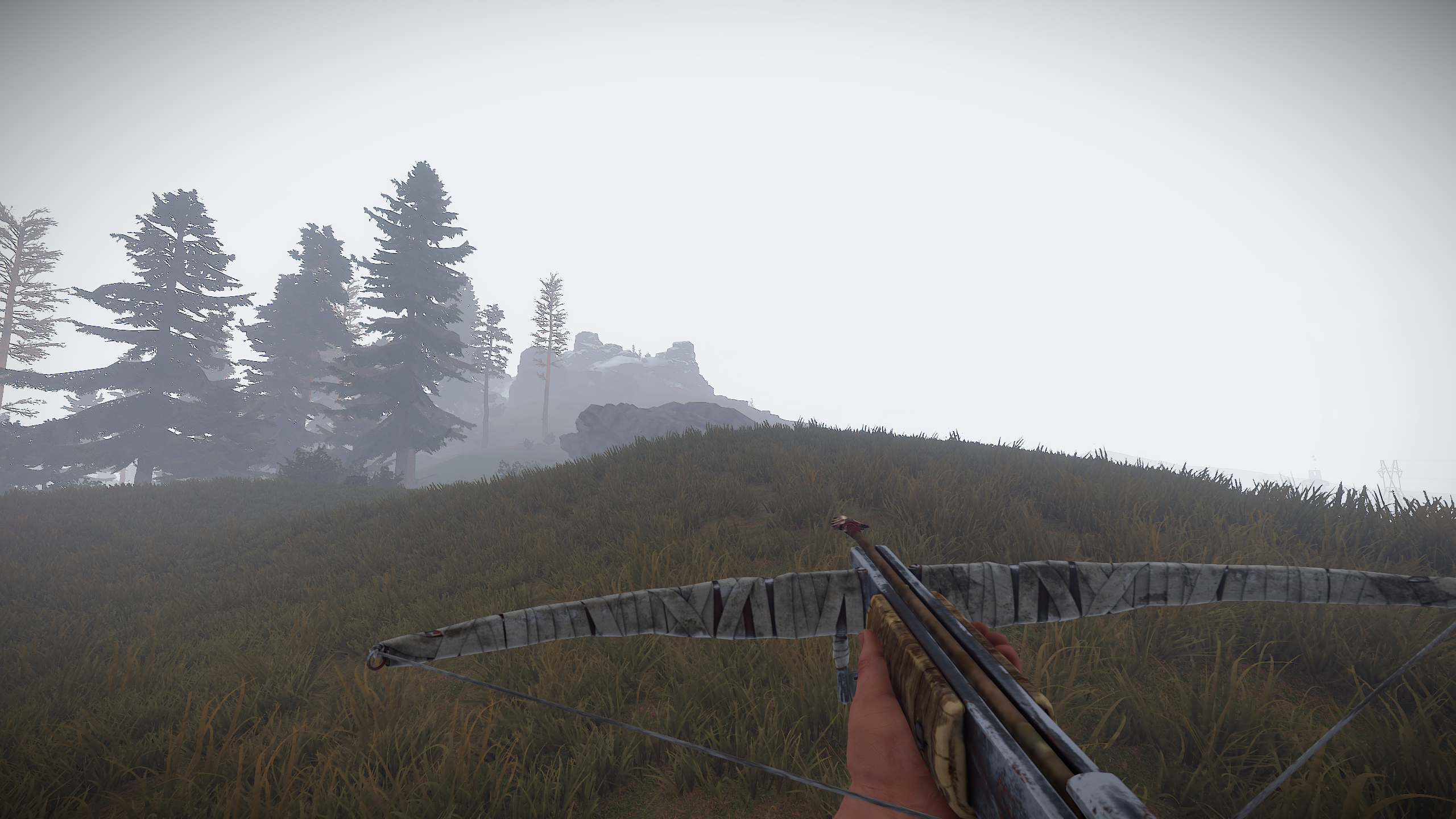 Fire arrows are a bit of a disaster right now, so please understand that this implementation is a 'first pass'. The visual effects are kind of crappy, and they don't work exactly how I wanted them to. You were supposed to have to dip the drawn arrow into a lit campfire to ignite it, but due to a bunch of issues this wasn't possible. For now they're always just magically lit. They too are a bit easier to hit targets with, and deal 20 fire splash damage in a 2m radius of their impact point. They also do damage to wooden doors and deployables, so you can technically use them to raid. You'll have to find these in the world and research them.

Expect some changes in the next patch, where the arrows need to be lit by another player's torch or a campfire, and they'll hopefully have better particle effects. 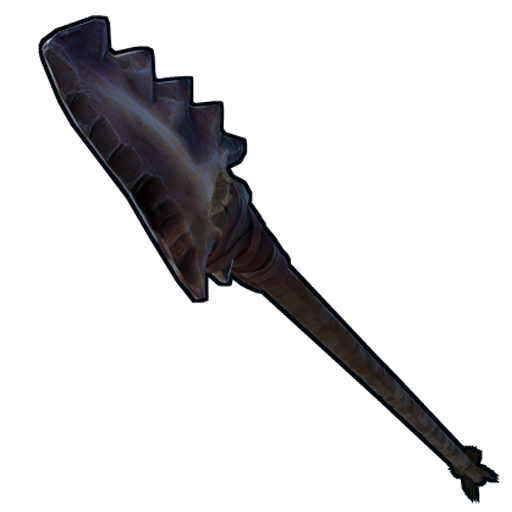 Key Lock Changes
I've been thinking more and more about the new player experience and how shit key locks are on the build up to us leaving early access. I can't tell you how many people end up getting locked inside their own bases on respawn because they didn't make a bunch of keys. The whole system was convoluted, and while we tried to make it cool and interesting, but we spent years with it and it sucked. So here we go. Starting today, if you placed the lock you can open and close the door without a key. You can also create keys to give to your friends if you want to. 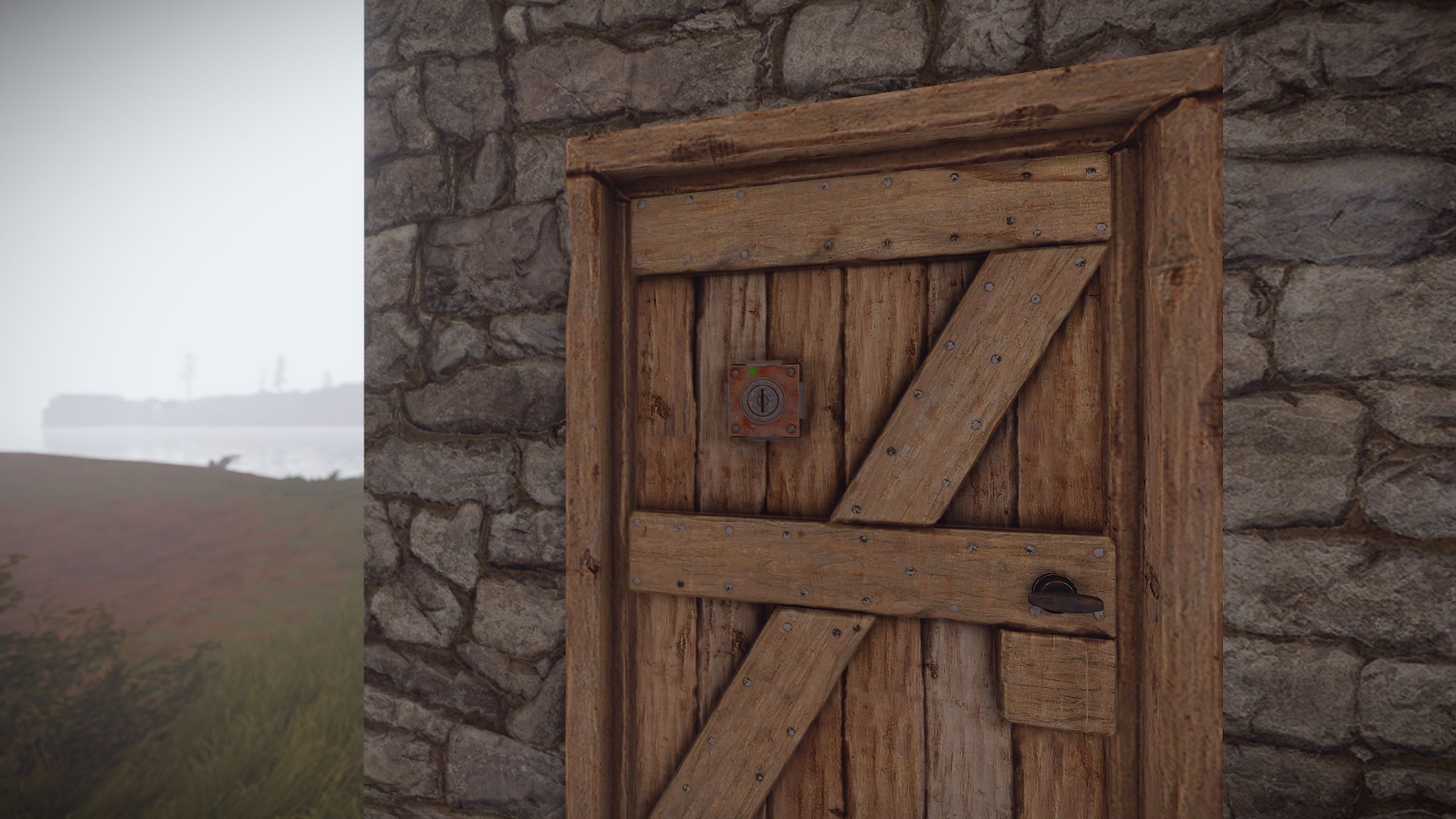 Also I've increased the number of key combinations from 100 to 1,000,000, so key lock raiding is no longer a thing. I'm sorry, but this really only made victims of players who had just joined the game, and screwed with the server when 300 blank key items that didn't stack were rolling down hills as players spammed to generate a random key that would work.

I'm hoping these changes make something as basic as locking a door to your base more of a right and not a privilege.

Building Damage
Remember in the past the damage to your building blocks was displayed with a darkening of the block? While this will make a come back when this is implemented, it will also look more visually pleasing and progressive, as we will use blending masks to gradually display the overall level of damage.

Pine Trees
This week I've been creating a set of pine trees. They are similar in shape and size to the old pines, but should be cheaper to render, and more dense than the old ones. In addition, Diogo has helped me with several new additions to the foliage shader, one of which will hide geometry planes when looked at from sharp angles. This will help the foliage appear more volumetric and less polygonal. 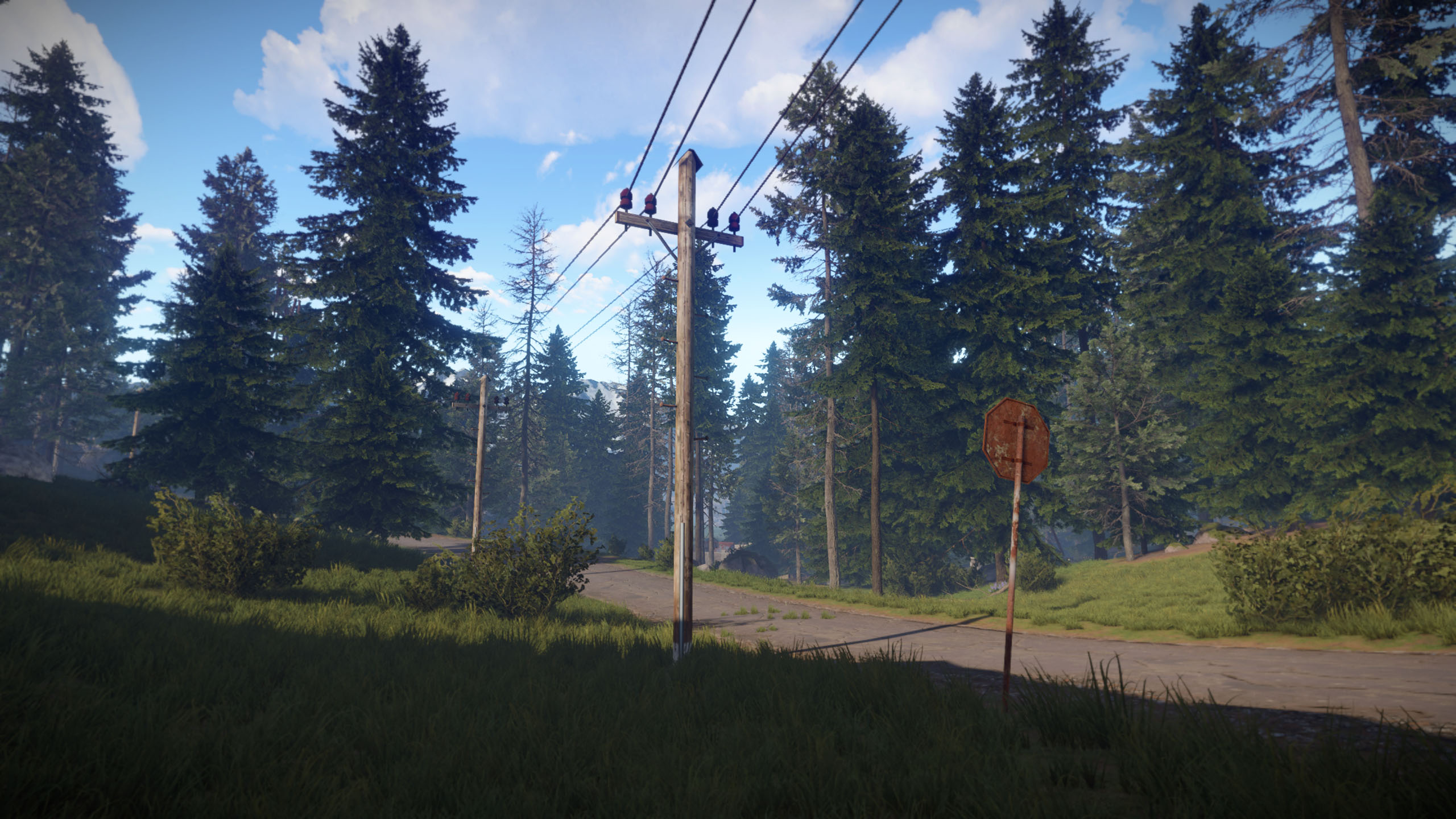 Cupboard Optimizations
Checking for cupboards near the player was rather slow on the client, and since the decay timer notifications all rely on getting the dominating cupboard this could add up to some rather significant overhead every frame. Since the client side code is only really required to update the UI and all of the actual building tests are verified by the server, I changed it so we only refresh the cupboard once per second on the client. This is particularly significant on modded servers that make it easier to build very large bases.

Christmas Light Exploits
There have been some exploits making the rounds that involved the Christmas lights. These are now fixed.

Server Optimizations
I optimized some server code this week. The biggest optimization eliminated 3ms per frame on our Staging servers, which is pretty good considering the entire frame takes around 16ms at 60 FPS. I can't wait for the upcoming AI features to immediately destroy those gains again.

Junk Pile Spawns
Junk piles could spawn in some really odd locations that made it look like the game was a high school project. 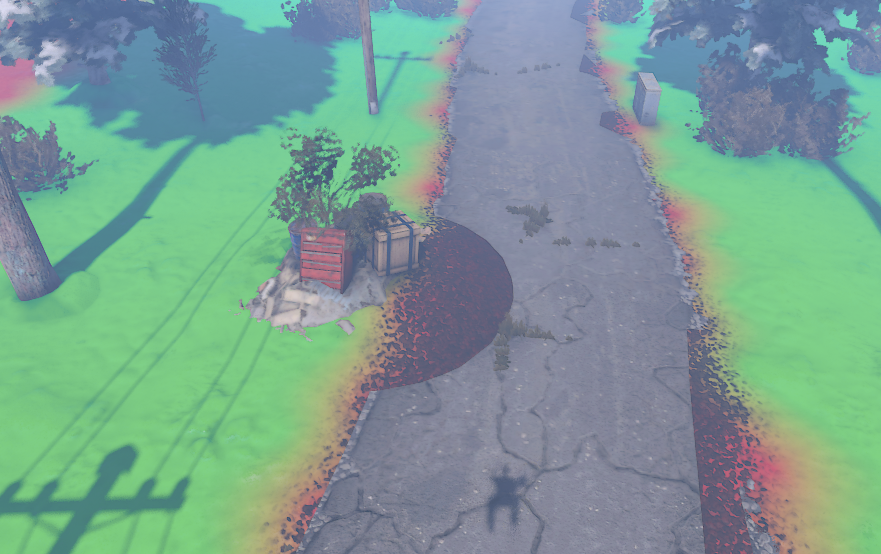 Junk piles are now much more connected to the terrain beneath them. They also avoid spawning partially on roads, which eliminates those weird terrain bulges.

Fog & Weather
I spent some time fixing numerous issues with our fog parameters. Weather parameters are now randomized every 18 hours. When foggy weather occurs we fade the fog to maximum density over 6 hours. At the peak density the world actually looks foggy now. 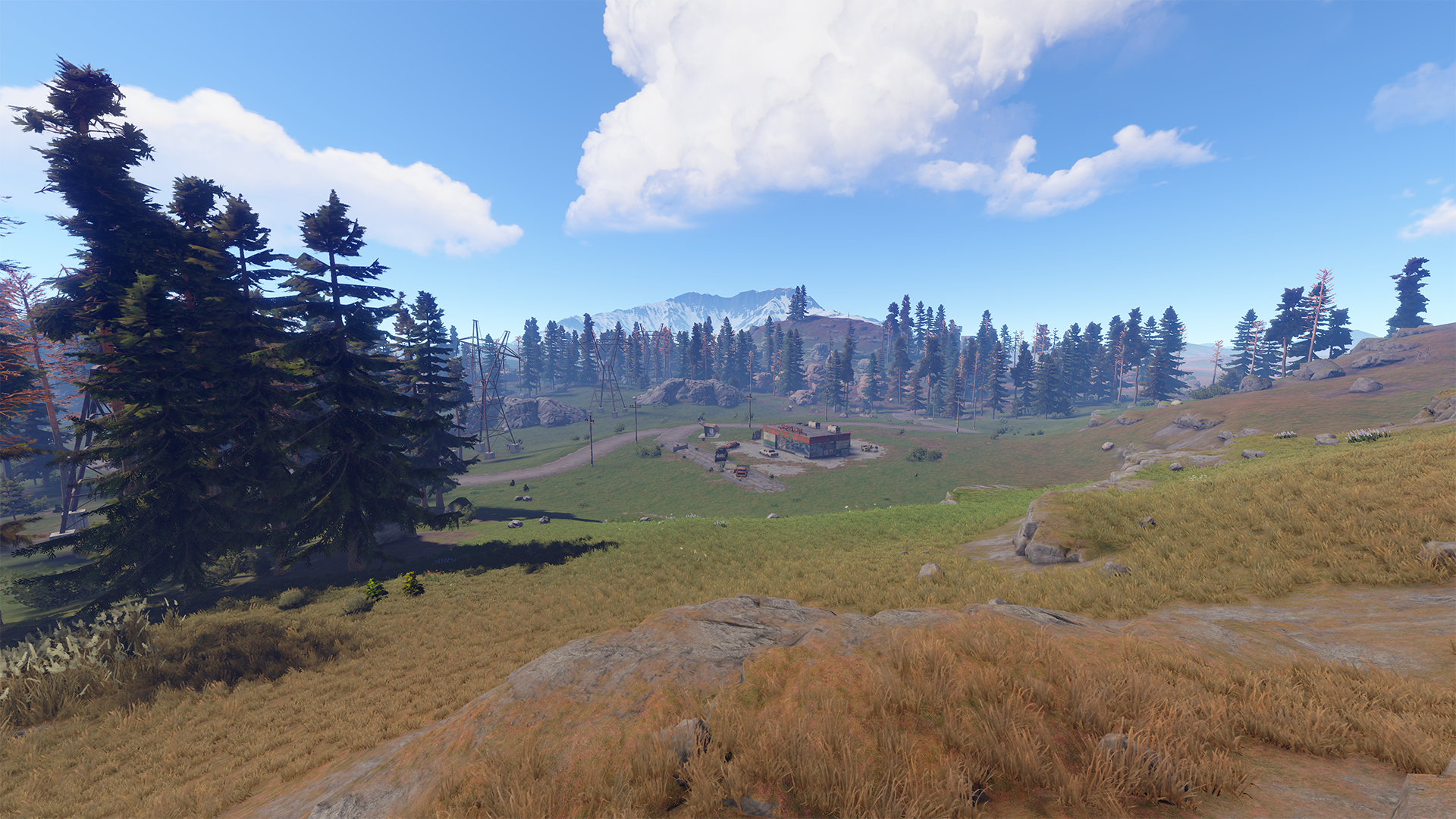 The fog algorithm also received some improvements to eliminate all unfair advantages from being in a different biome or at a different altitude than another player. Fog is now guaranteed to have the same density from A to B and from B to A. A side effect of this is that the plane and helicopter are once again properly fogged when looking up at them.

Night Improvements
I fixed a number of issues with the night sky. Stars are once again visible at night, and the night sky is darker at midnight to reduce the contrast between ground and sky. 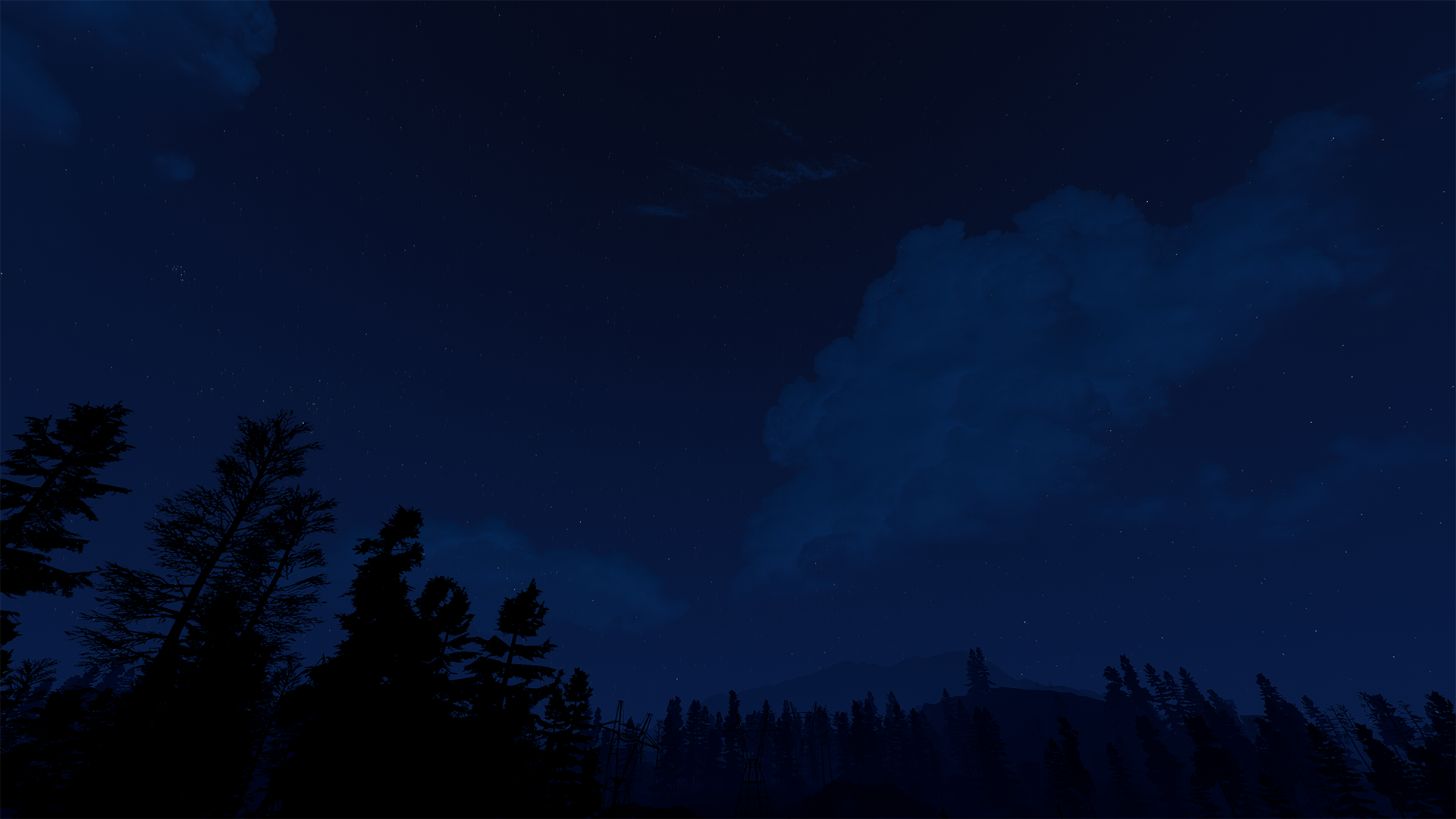 Underwear!
Something we see requested occasionally is for an alternate method of censoring nudity. This is often from content creators whose videos have been flagged for nudity on Youtube or Twitch (despite the pixilation filter), but also from people who'd feel more comfortable playing without any indication of nudity. I've made an alternative skin set featuring underwear which will remove all nudity from the game (including any accidental edge cases of genitals clipping through clothing, etc.) I've finished up the art and just need to adapt it to all the different skin types. 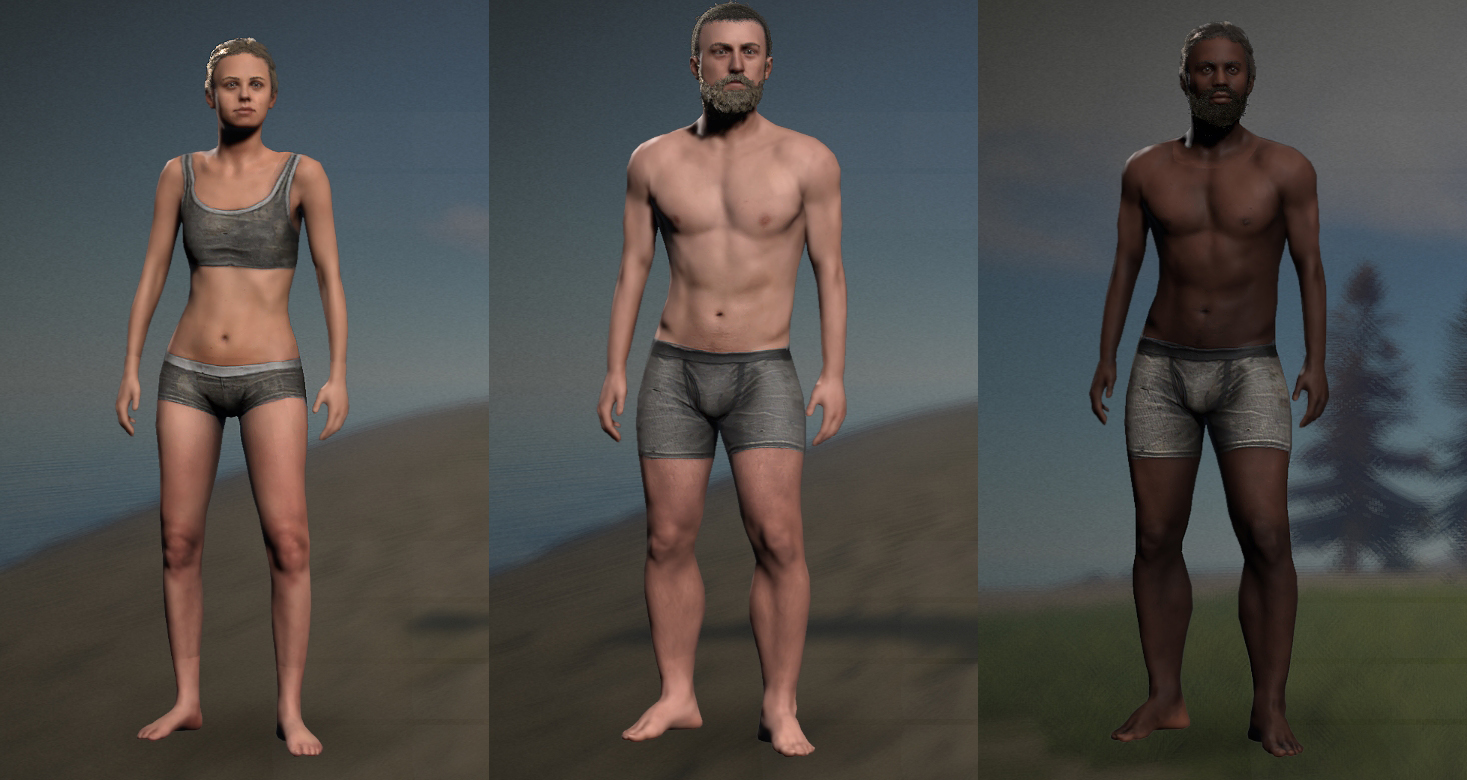 This has been on my to-do list for a while, and it seemed like a good low hanging fruit I could cross off while I'm recovering from the flu I had over the holidays! Although we can't guarantee content creators won't have their videos flagged in the future, hopefully it'll help.

Admire Animations
As you know, admire animations hit main at the end of last year. Some of the existing animations however were only placeholder, so I'm working through these to bring them all up to the same quality. Here's some of the updates so far:

Third-Person Sounds
I've continued working on improving consistency between viewmodel and third-person player model sounds this week, and most held items have third-person deploy sounds now. I've also created new first person deploy sounds for some items that didn't have any yet. The only third-person sounds left to do now are throw sounds, for stuff like C4 and grenades, and a few one off bits, like bandaging or using a syringe.

Viewmodel Tweaks
Over the past few weeks I've been going over some of the viewmodels (mostly firearms), tweaking the animations to make them look snappier. I also improved the special effects by making new smoke sprites and adding smoke coming out of the ejector port.

I also tweaked the texture specularity for some of the weapons to better highlight the contrast between plastic and metal parts.