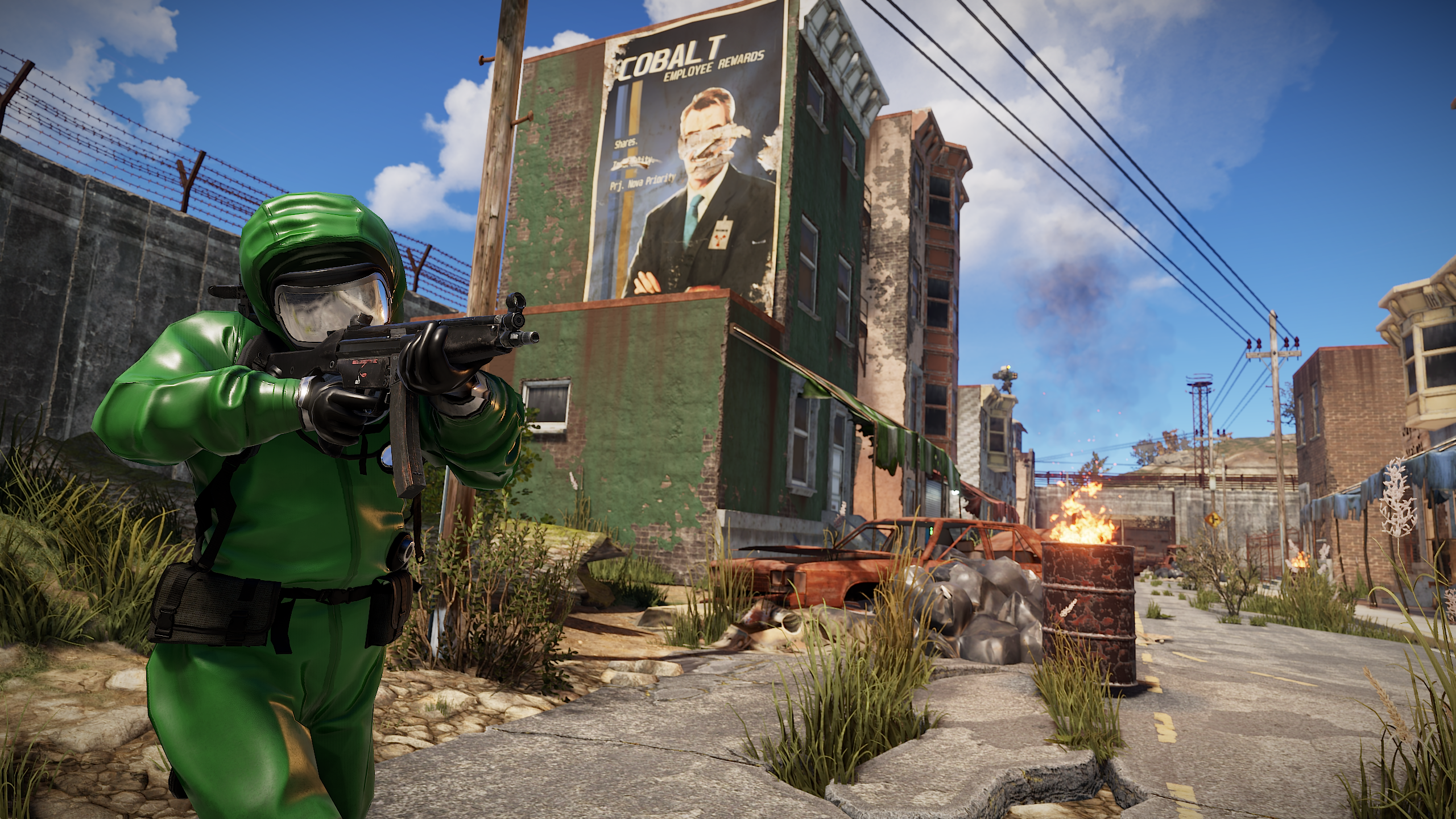 We added a scientist protected compound, where players can gather and 'safely' do business. There's also scuba gear and underwater dive sites for you to explore, first-person clothing, and more. This patch wipes the maps, but your blueprints are retained.

Compound
We've added a new monument to the game: the Compound. This is a scientist controlled area intended to function as a safe zone, and there are rules:

If you break any of the above rules you will be marked as hostile and the scientists and their turrets will use lethal force against you. The hostile status persists across death in an attempt to prevent griefing.

If you obey the rules then you're welcome to roam the compound and interact with other players in a non-hostile fashion. In addition, you can use the first set of NPC Vending Machines, which sell a variety of items: 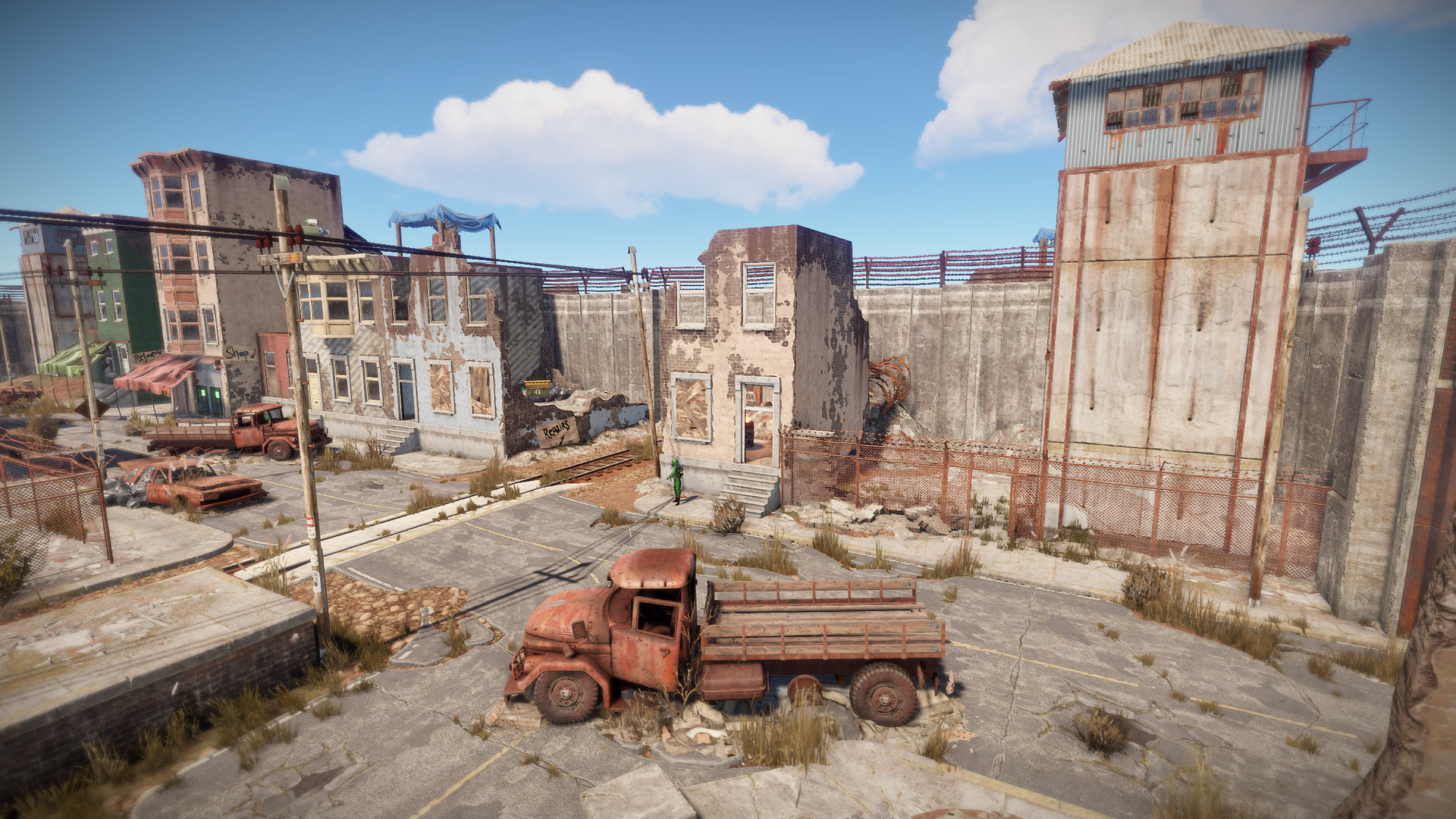 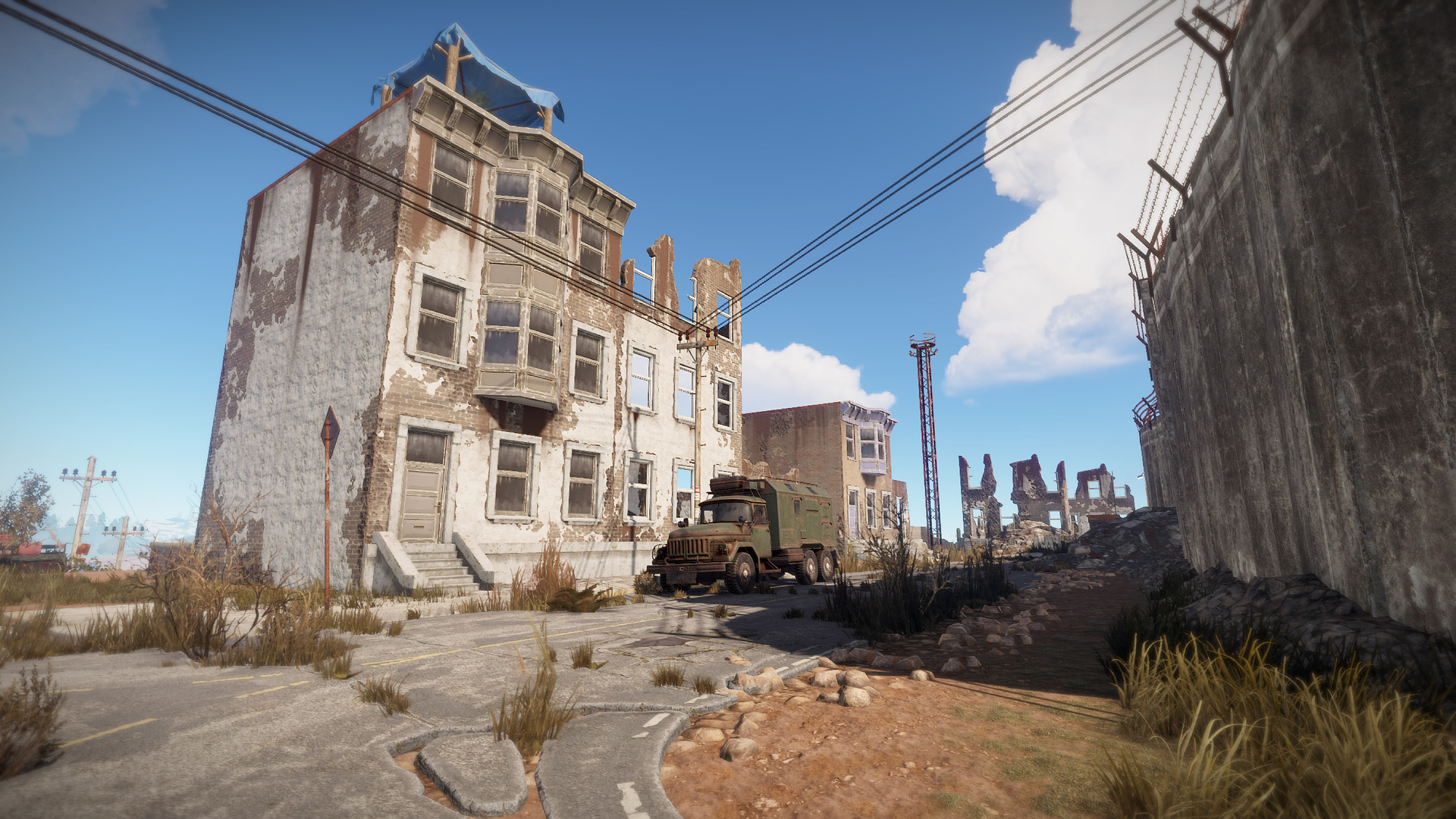 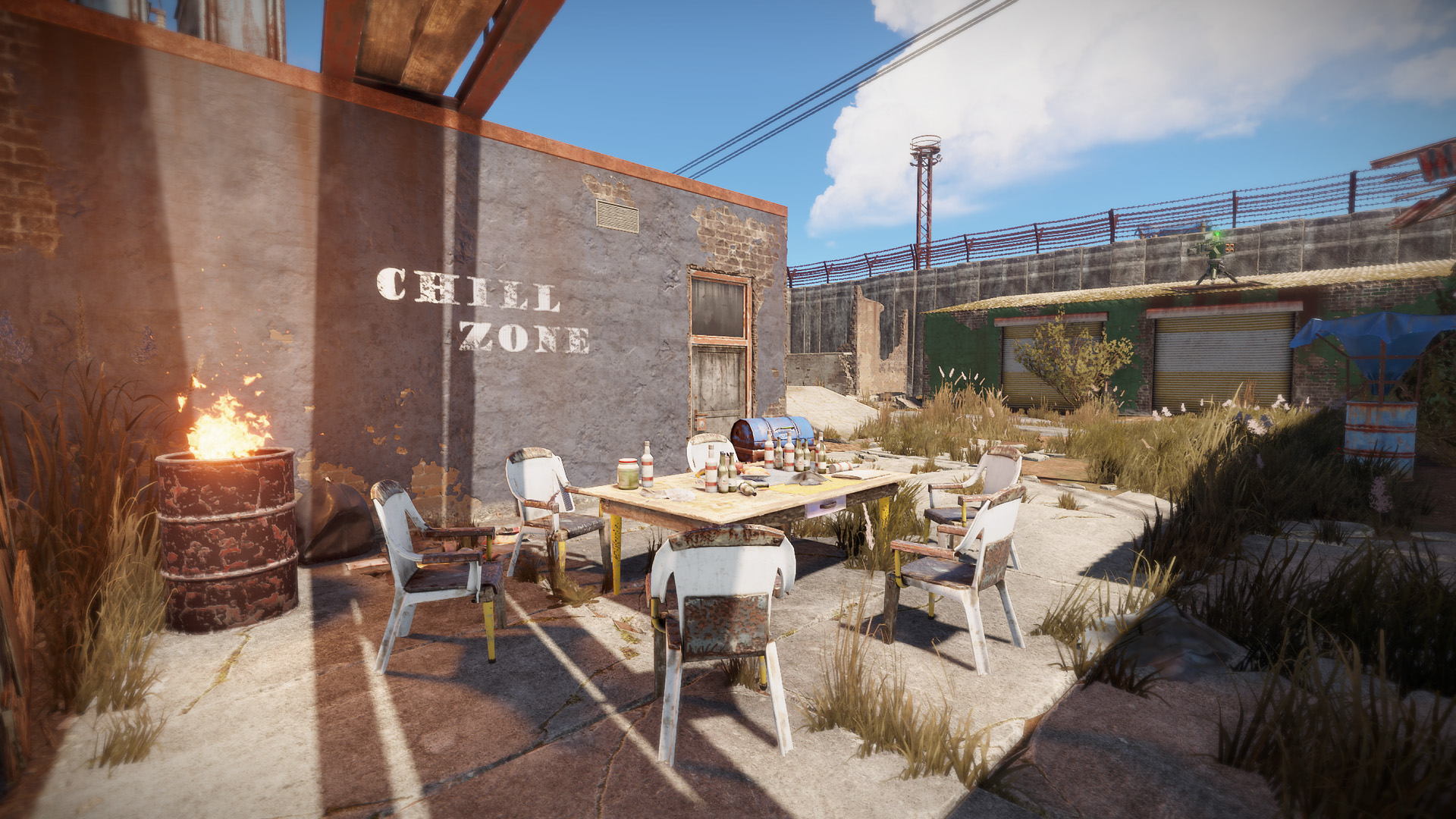 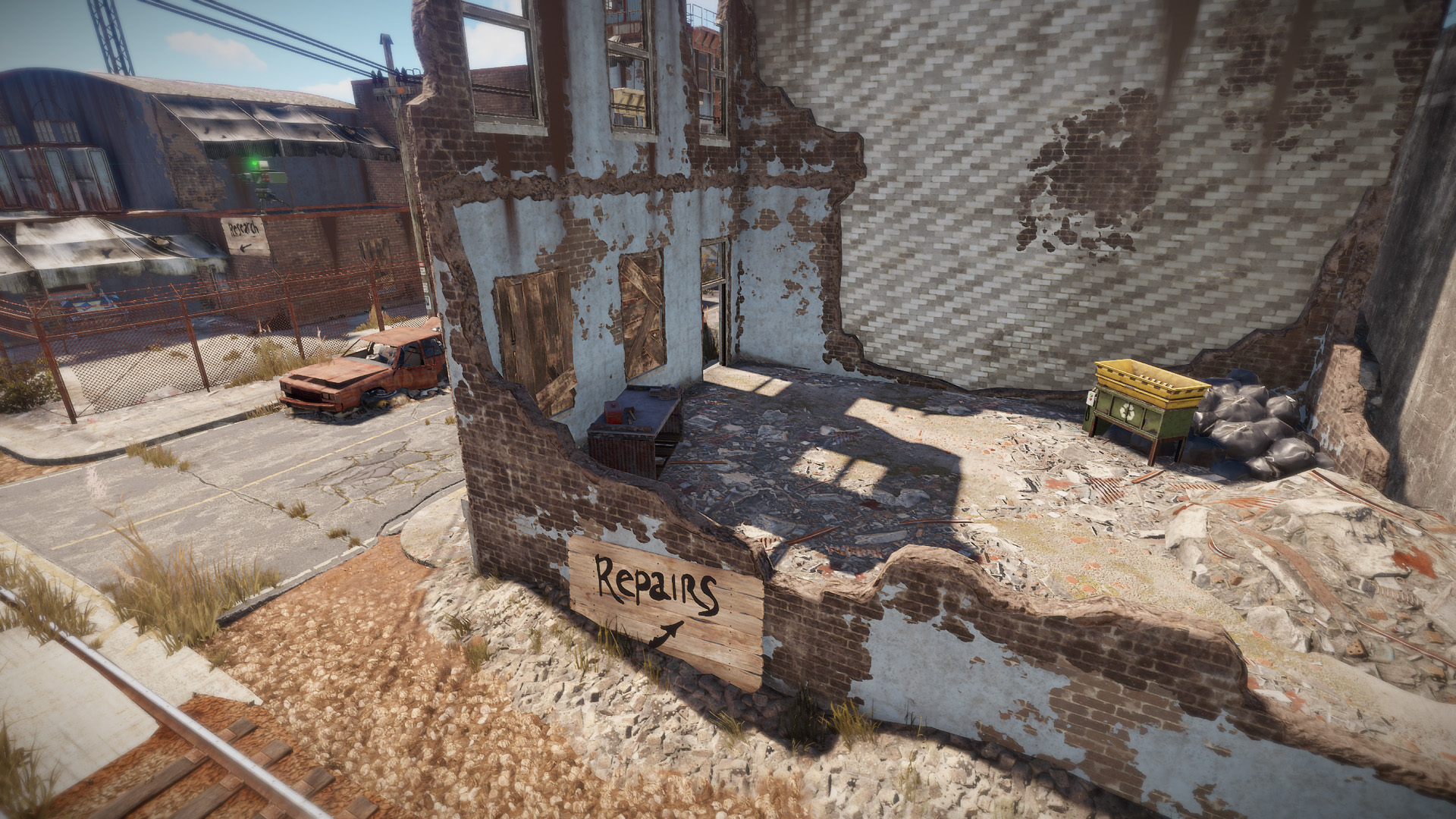 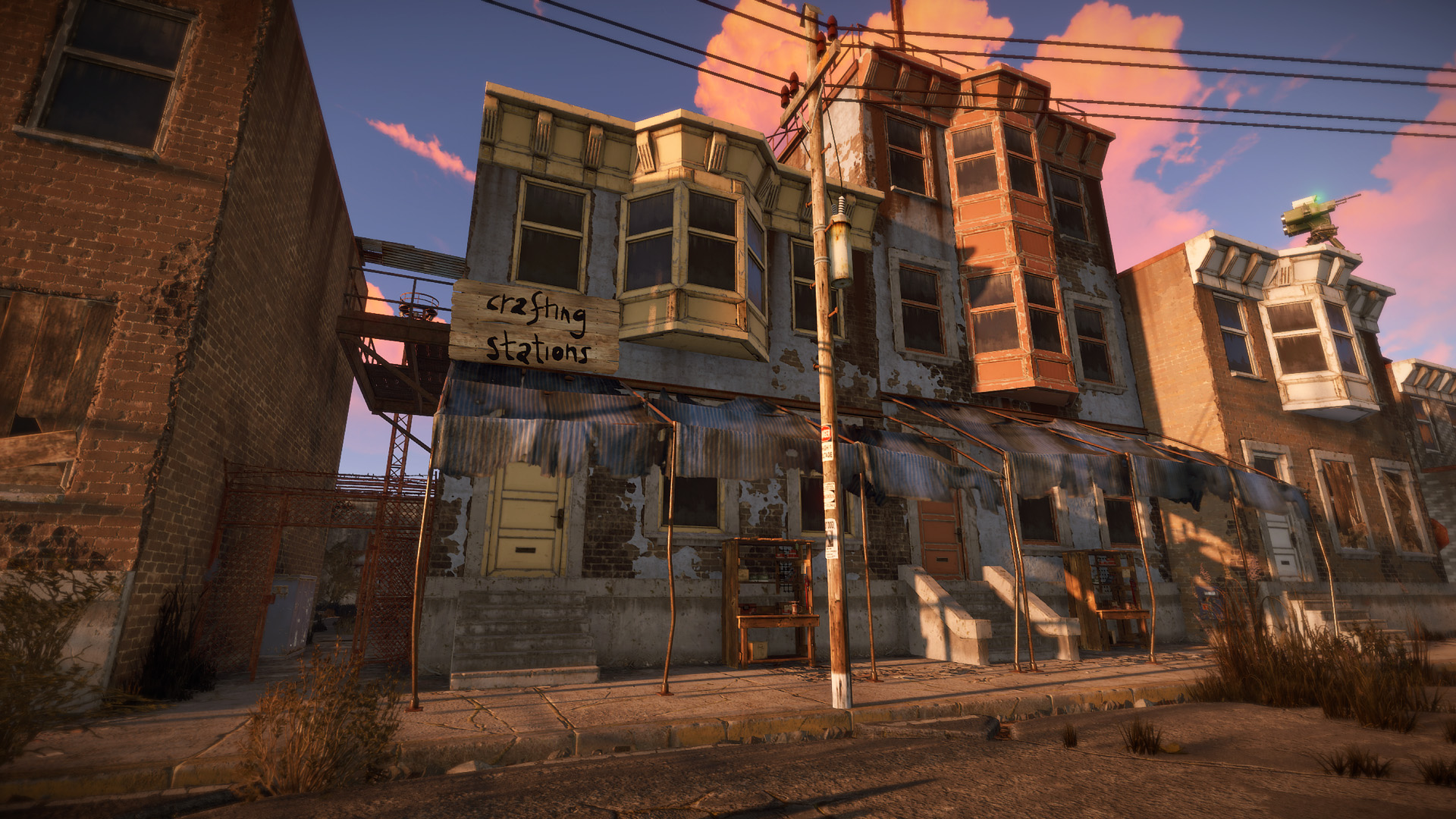 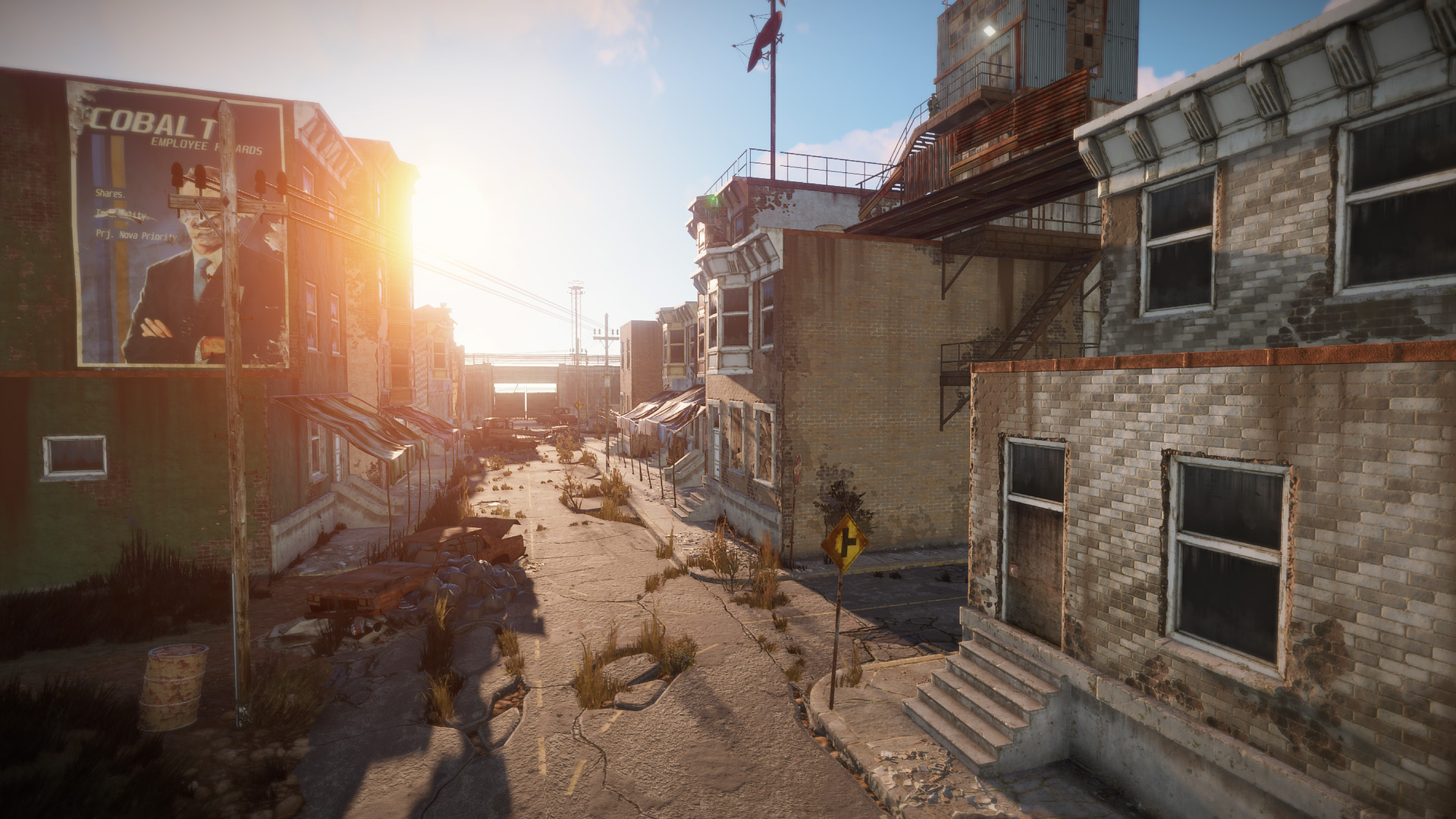 It's probably going to be gamed pretty hard, so we'll have to just keep iterating, but this will bring a new dimension to the game that we're very excited to see play out. We originally intended for people to set up these kind of zones with peacekeeper turrets, but after a year and no-one bothering we took matters into our own hands. We really hope you guys have fun with this and we'll be listening for feedback and fixing problematic areas as the month goes on. Enjoy!

Scuba Gear
You can now find a full suit of diving gear from crates around the island. Each piece has its own unique function, and a full suit will make you a veritable dive master.

Diving Goggles: You can see underwater. Diving Tank: Breath underwater for 10 mins, can be refilled. 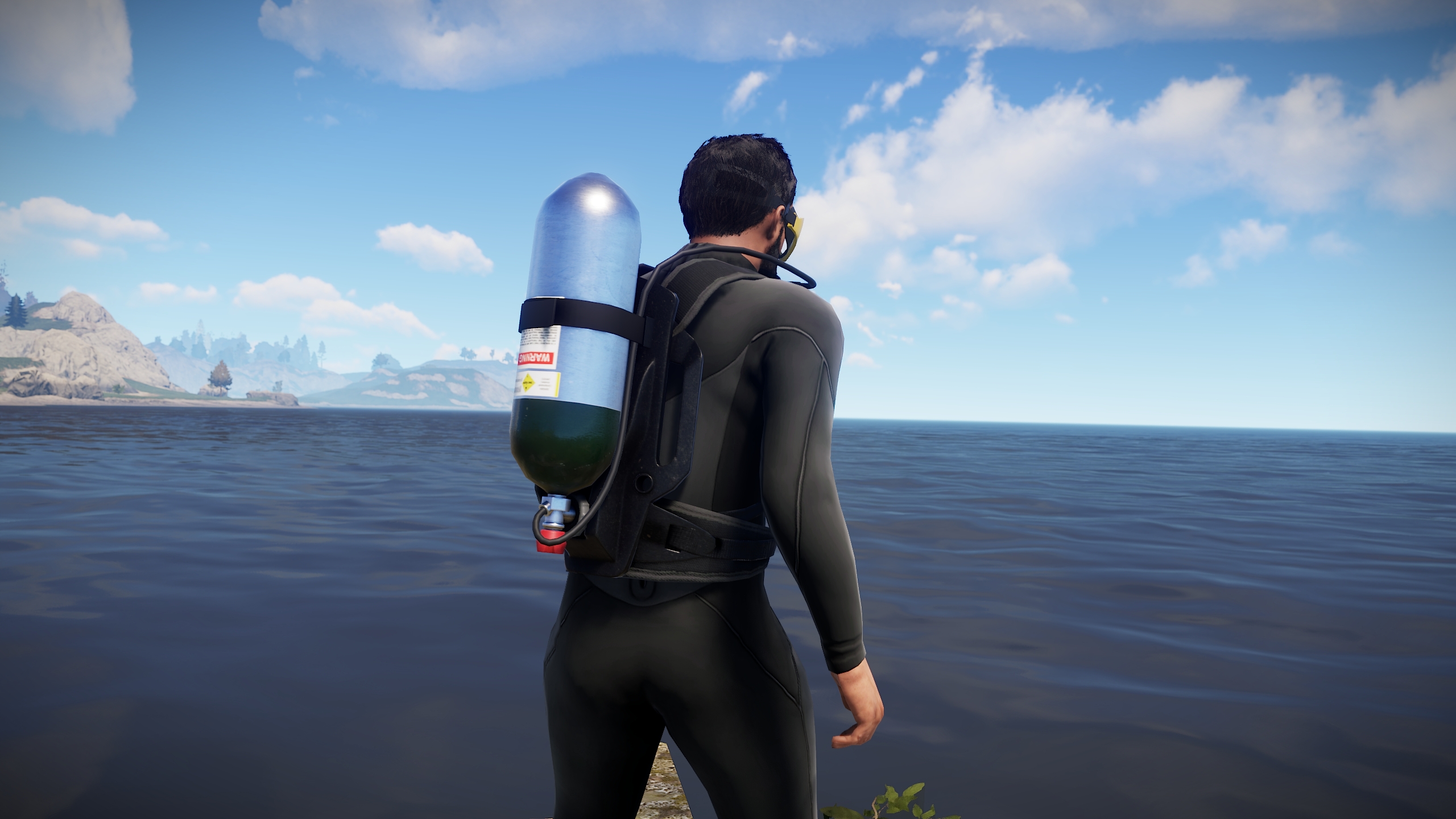 Diving Flippers: Move faster in water but slower on land. 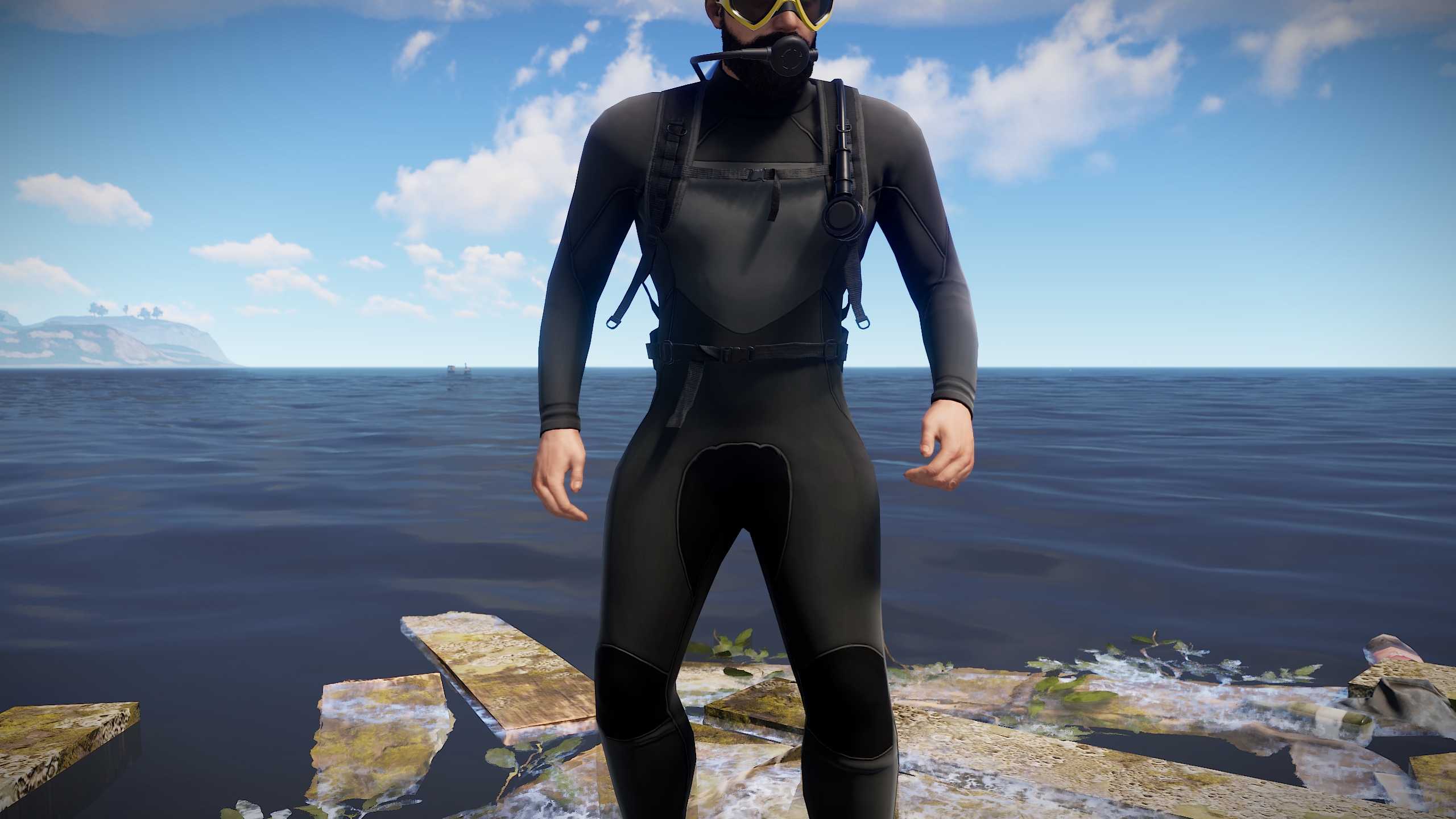 In addition to these new items we've added a reason to use them. There are now a multitude of dive sites found underwater. You'll find rock formations with respawning loot, as well as temporary sunken ships. Each underwater crate is tied down and must be released to gain access to the loot. Simply press and hold E on the crate until it has been freed and then retrieve the contents on the surface. This works best if you have a boat and/or multiple players working at it, but if you find a quiet place you can get along solo

Underwater Rock Formations
As a part of the diving additions, I created a set of underwater rock formations that you will find by exploring the ocean floor. There are six different variations of different shapes and size, and each of them spawns several crates containing loot. These have been created rather quickly, so a lot of the art is still temporary, but we are hoping to polish them further in the coming weeks. Scientists Sentry Turret
It's been a pretty hectic ride for Damian and I this month. Lots of work went towards the new compound, and while we re-used a lot of existing art in it, we also strived to add some fresh visuals where we could.

At the end of this monthly sprint, I spent some time working on a new piece of scientist gear. Here's the sentry that will safeguard the peace in the Compound: Anti Hack
The cheating situation has been far from ideal this year. In fact, it hasn't been this bad in quite some time. We're aware that it's a problem and I've spent the majority of my time this month on new server side prevention mechanisms to push back on it. Here's a list of things hackers can do:

There's no excuse for us not addressing these for as long as we have. We simply haven't held up our end of the deal. The good news is that's exactly what I've been working on this month and none of the things on this list should be possible anymore. Hacking is never going to be solved entirely and I'm sure we'll see new or unknown ways hackers can do their thing over the next few weeks, but we're committed to doing what we can on our end so the situation will never again be as bad as it has been for the early months of this year. We're also talking to EAC about what they can do better on their end and we'll have regular check-ins with them to evaluate the progress.

Building System
I did another polishing pass on the building system to prevent a number of exploits that have been rising in popularity over the last few months. The list of fixed exploits includes, but is not limited to, doorless roof bases and fanned wall stacking, which I'm sure someone will tell us makes the game literally unplayable. The freshly rewritten wall stacking prevention also comes with fewer false positives, which should bring back some builds we unintentionally removed with version 3 of the building system.

First-Person Clothing
Garry implemented support for first-person clothing models, so this long-awaited feature is in at last! I'll be polishing these over time, fixing up any rogue seams which are way more visible in first-person than the view they were originally intended to be shown in. I'll also be adding more tiling detail to models with obvious fabric-like materials. Full support for skins is also included! AI
I added new AI for the Compound scientists. They can follow strict patrol paths, pause on the path to ensure the peace is kept in that area, before continuing. There are also stationary Compound scientists that stand still until they need to take care of hostile intrusion. The Compound scientists are quite relentless at running after and finding any player that disturbs the peace, with a newly added ability to search for lost targets.

The CH47 scientists, Military Tunnel scientists, and Junkpile scientists have all seen improvements throughout the month, and the bug that kept AI Dormancy from being enabled by default has been fixed.

Underwater Rendering
The underwater part of our ocean rendering has been unimportant and placeholder until now. With the team moving to make water a meaningful part of the game, some changes were necessary.

This change, along with being able to use a mask to improve underwater visiblity, is likely to have a big influence in your diving, since it may restrict your awareness of what's going on at the surface. There are still challenges ahead, however, which are covered in the Water Rendering WIP section.

Ambient Occlusion 2.0
For those of you who aren't familiar with Ambient Occlusion, it is used to approximate the perception of global illumination when resources aren't available to compute realistic full-scene lighting, which is almost always the case with games.

The previous technique we used was very fast, but it was a very poor approximation. It suffered from all kinds of overdarkening, and we couldn't properly setup the viewmodel hands while still getting good results in mid and far distance.

This implementation is based on the current new state-of-the-art technique for Screen-Space Ambient Occlusion. It is much more accurate and robust, faithfully approximating the ground truth, or actual brute-force raytraced ambient occlusion.

The effect has been exaggerated in this shots. Notice how global shadowing now connects objects to the ground and they no longer look like they're hovering.

Surprisingly, it also turned out to be faster than our previous one, leveraging the use of temporal integration, as you can see from the FPS delta on the lower left corner.

Please note that it still has a few quirks and will be improved over time.

CPU Rendering Optimizations
I took some time to do another optimization pass for this update, this time I focused on CPU-side rendering. A few hundred of our environment objects weren't using hardware instancing properly, as well as some specific detailing surfaces we call ‘deferred mesh decals’, which required custom instancing code.

It's hard to tell how much this will improve overall performance, but is most likely to benefit players using low to mid-range CPUs.

Water Rendering WIP
The latest underwater changes pushed me to start looking at solving some of the problems we currently face with water rendering, and hopefully open the door to some long overdue improvements in the near future.

You'll notice how underwater doesn't currently work properly on rivers, how flashlights are way too dim when deep in the ocean water or how caustics aren't shadowed and may disappear when looking from underneath the water surface. These are some of the known issues we currently face that aren't trivial to fix.

I started working on fixing them for this update but, unfortunately, they are not ready so the current plan is to toll them out on the next update.

Chainsaw Sounds
The chainsaw received a proper sound pass this month. This one was really fun to do. All the sounds that the chainsaw itself makes are new and quite a bit beefier. We've also got loops for hitting different surfaces now, instead of the goofy repeated impact thing we had going previously. I kept the bass on the chainsaw engine sounds somewhat light and emphasized the midrange buzz/growl more, and then in the surface hit loops I boosted the lows a bit to try to emulate the feeling of a chainsaw connecting with something in real life. I think the sound for the chainsaw hitting flesh is one of the grossest things I've ever made.

Boat Sounds
The boat got a proper sound pass this month. I experimented a bit with new systems to fade and blend between loops that are tightly related to each other, like multiple engines, and landed on a nice solution that's quick to set up and gives us a lot of control. This was used to handle the boat engine sounds and the sound of the water around the boat.

There are sounds for mounting, dismounting, pushing, and steering the boat now. When you're moving near full speed there are occasional thump/splash sounds as though the boat was hitting small waves, and there are physics impact sounds when you hit something now too.