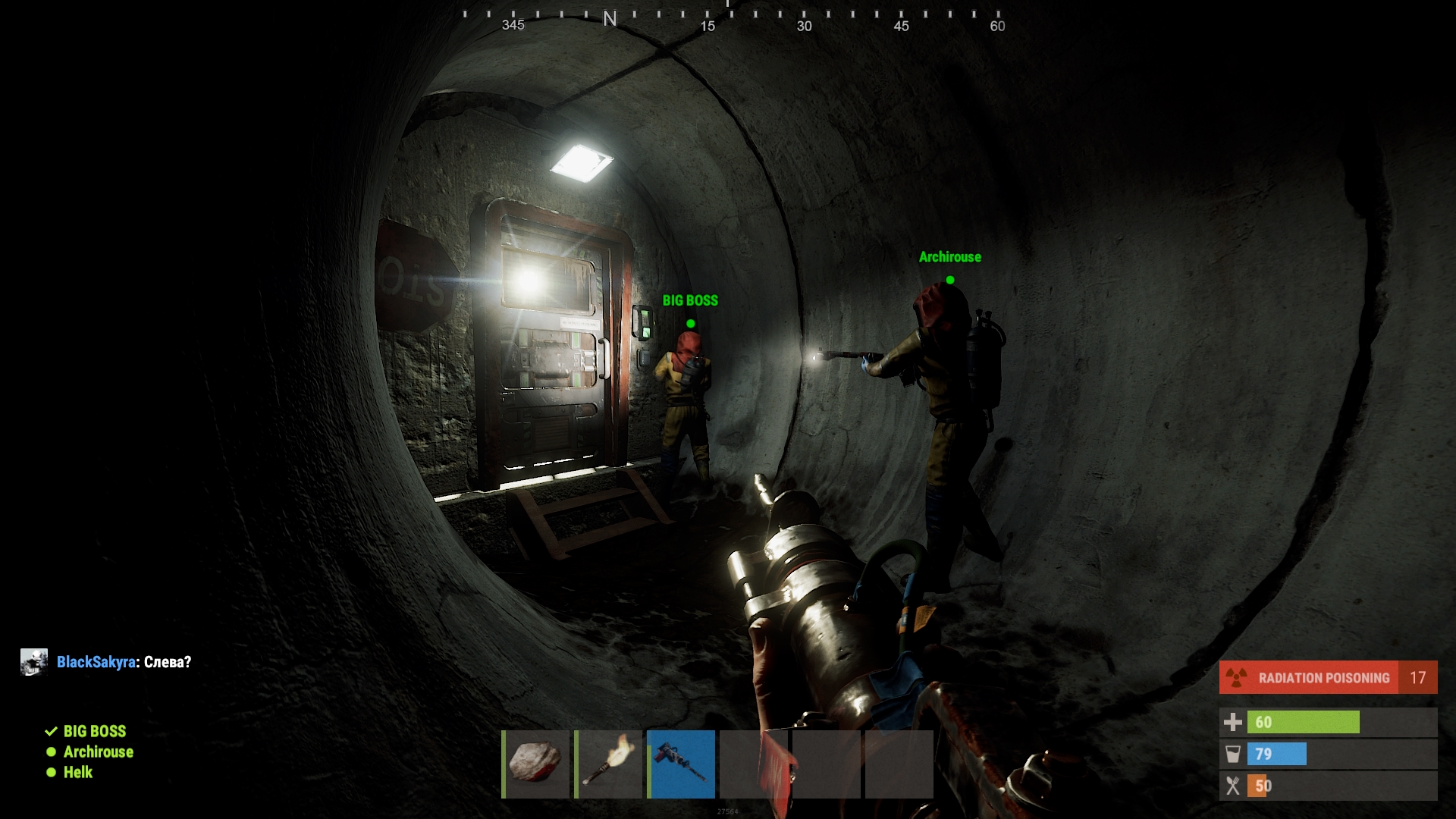 A new Team UI is here, alongside the jackhammer, a deployable watchtower, and more. This patch wipes the servers.

Team System
We've added a rudimentary team system. This means you can create teams and invite other players to them. This will yield the ability for all team members to differentiate each other at long distances, as well as see each other on the map. You can also see if someone is online or dead. It's pretty straightforward:

To create a team, press tab and click the "Create Team" button. To invite another player, walk up to them and press E.

To kick a player out, you must be team leader (checkmark): hover over them in the tab menu and press "Kick". To promote another player to leader (if you're logging off,) hold "E" on a team member for 3 seconds. To leave a team, press the "Leave Team" button in the tab menu.

Teams have a default max size of 8 and any server can disable the team system entirely with the startup command maxteamsize 0.

The decision to add this to the game has been very controversial, with some players saying it will ruin the game, and others welcoming it with open arms. Here's where we stand:

The only way to play together as a team effectively is to use third-party voice software and ask players to jump to identify who they are. This is unacceptable. Sure, this added a meta where people got really good at jump-checking, which gave them an advantage over other players, but let’s be honest: it's stupid.

You could also get skins and have matching uniforms, but even that was extremely difficult to manage, and it only worked for the most decked-out of players who weren't running with patchwork items, and it didn't work if someone had skins disabled.

It's worse if you just meet an ally and want to roll together and then encounter another group of players. There's no way to differentiate who's who and the game breaks down into chao. Or worse yet, you have to hesitate before firing which results in you dying, losing all your shit, and rage-quitting the game.

At the end of the day, with the team system I feel we gain more than we lose, and we can tweak and modify it as time goes on. Worst-case scenario is that it sucks so bad that we have to remove it; best-case scenario is it makes the game better. Either way, no harm is done.

I hope you guys enjoy this system, and as much as I hate reading through the abuse and spam, I will be checking for the few nuggets of constructive criticism over the next few weeks.

Watchtower
We've added some low hanging fruit for you guys, and I think it'll add a new and interesting mechanic to the game, as well as spruce up player-made compounds.

The watchtower you've seen at various monuments, such as the quarries, is now a deployable object. You can find them as blueprints pretty commonly in square tier 1 crates. You can research them for 75 scrap, and craft them for 2000 wood. 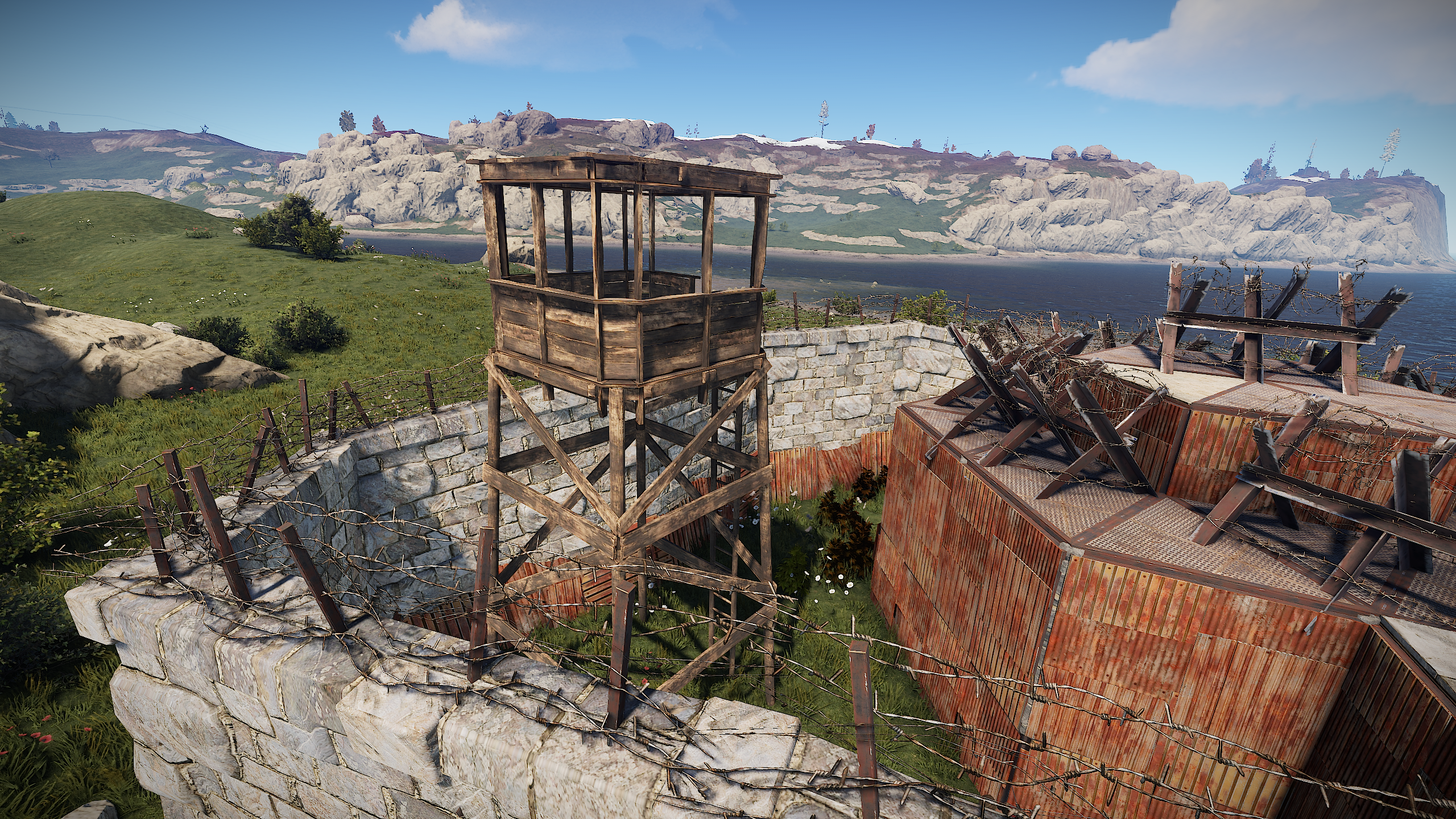 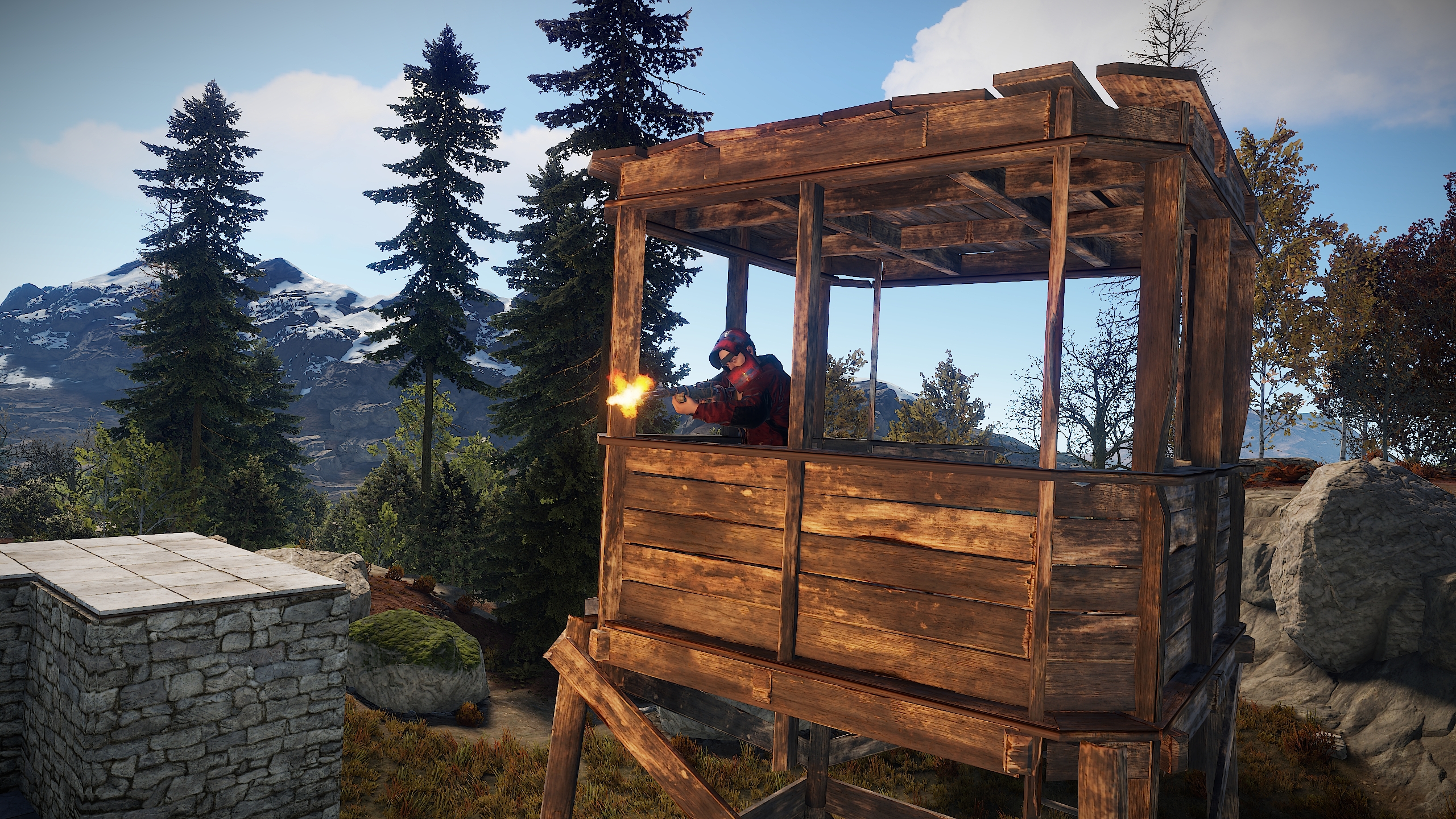 Special thanks to Pojomania for the suggestion, this prop was perfect.

Jackhammer
We've added the Pneumatic Jackhammer to the game this month. It is the ying to the Chainsaw’s yang in terms of resource gathering and will absolutely destroy ore nodes. You don't even have to aim at the specific hot-spots as it will tear down the entire node in seconds for the full yield. It'll also grind up humans if you can get close enough. 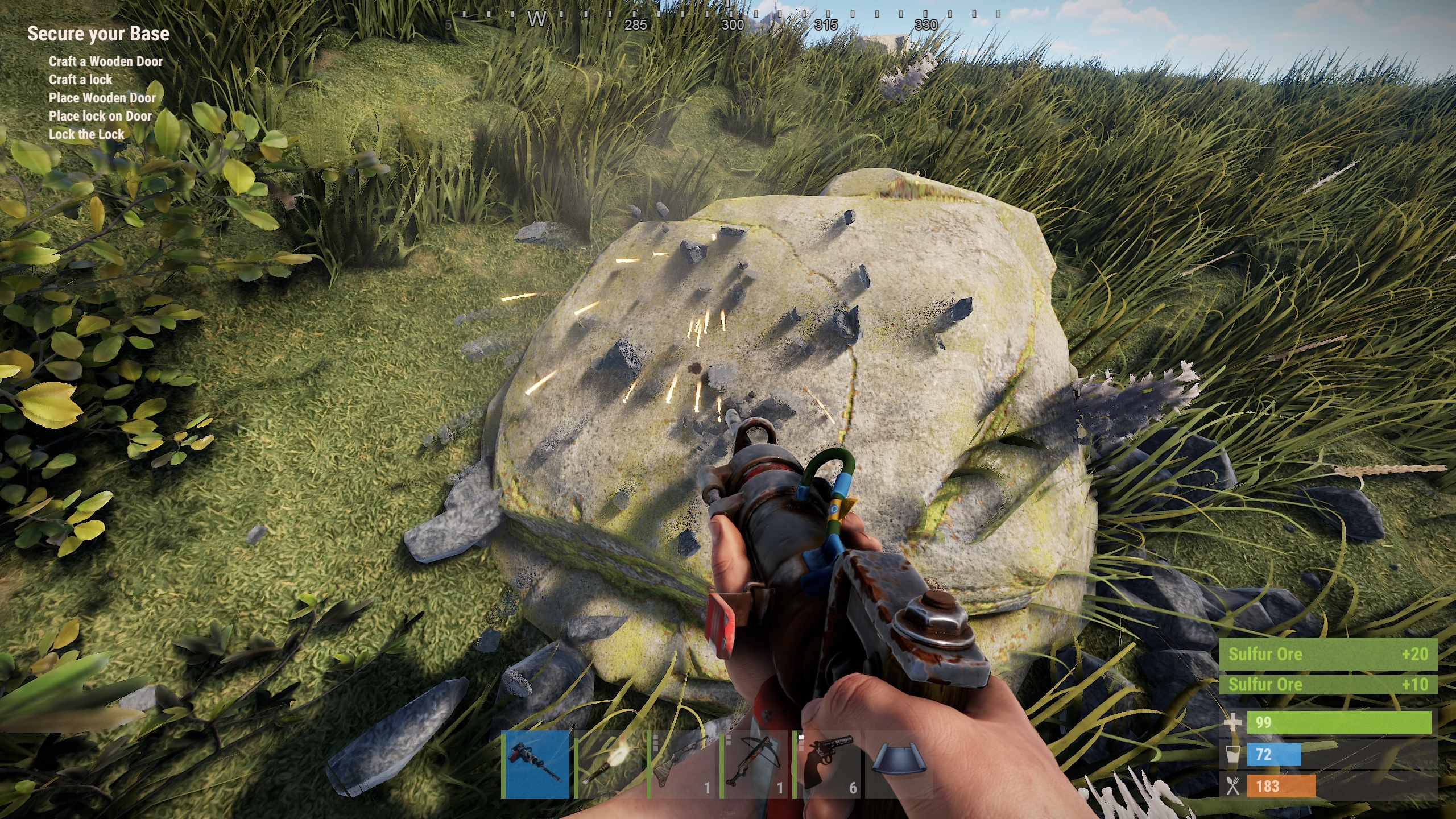 It's uncraftable, can't be repaired, but can be refilled with air at a workbench similar to the diving tank. You'll find it in tool crates and it is available for sale at the compound.

Compass
We've added a compass to the in-game HUD. It's at the top of your screen and shows you your current heading as well as including numbered markers for directional callouts.

Some people have complained that this is anti-Rust, and it should have been some kind of a handheld item. Maybe they're right, but I'm sure we'd have gotten more flak if we used up yet another belt slot for that. Let’s just try it out as it is and see if we need to make any adjustments in the future.

You can change the compass visibility in the options menu to either Off, Toggle, Hold, On and the default compass button is C.

Monument Puzzles
No new puzzles hitting this month, but a well-deserved visual polish update to the puzzle elements. The work spent on these new elements will be re-used for player electricity circuits (when it comes). Here's some of them in isolation:

More will come to the puzzles in the future as we have been floating the idea of having alternate sets for each monuments, to keep the experience fresher.

World SDK
I've been working on our SDK to support the creation of custom map tools for Rust. It's called Rust.World and the source code is available on GitHub under the MIT license. Things are at an early stage, but I'm hoping to get the second version of the SDK wrapped up this weekend. We've already spotted some interesting stuff out in the wild and I'm sure things will only be getting crazier from here.

Water 3.0
For this patch I'm rolling out a big, long overdue, mostly internal revamp to the water system. Our system has historically been a bit too static to handle our procedural scenes and dynamic gameplay, so most of the work this month was dedicated to make the system more robust.

Our designers now can preview final water during scene editing, without having to fire up the game. It is now possible to add, remove or change any body of water during gameplay which opens up a lot of possibilities like spawning water pools or changing the ocean water level at any point in time.

There are some slight visual improvements, though mostly related to foam which no longer reflects way too much of the surrounding sky, rendering white as Nature originally intended. Also fixed a couple of bugs that were causing irregular patterns based on terrain slope and added wave based foam deformation.


There's still a lot of work and aesthetic improvements to deliver, which I hope to get back to after taking care of some priorities for next patch.

Ambient Occlusion Update
We updated our Ambient Occlusion solution to latest, which features a decent performance boost (>30%) and a slight quality improvement. From our tests, anyone running a mid-range card - e.g. NV GTX 960, NV GTX 1060+, AMD R9 380 - should notice only very small impact in performance (1-2 FPS) by turning on at Full HD resolution.

Take this opportunity now to turn it on since it plays such a very important role in tying things together, adding depth to the visuals:

Bandit Town and Swamps Preview
Despite what we had hoped for, the Bandit Town monument won't be making it in this month’s patch. While majority of art is already done, the gameplay part has not been implemented, so we decided to push it until next month and polish it instead of adding half-finished content.

However, having an extra month gives us time to expand this idea further. In the next patch, you will find that we will not only have a Bandit Town, but also a new Swamp mini biome that will appear in Tundra and Temperate climates. These swamp landmarks will work in a similar fashion to the ice lakes, and will not only provide visual variety, but will also allow you to build your bases there and complete your fantasy of playing as Shrek.

The Bandit Town itself has gone through some changes since the last update. We replaced the wooden cabins with much higher quality assets and dressed them up with some new props that were made by Tom. There is now also new swamp foliage, such as reeds and water plants made by Vincent. 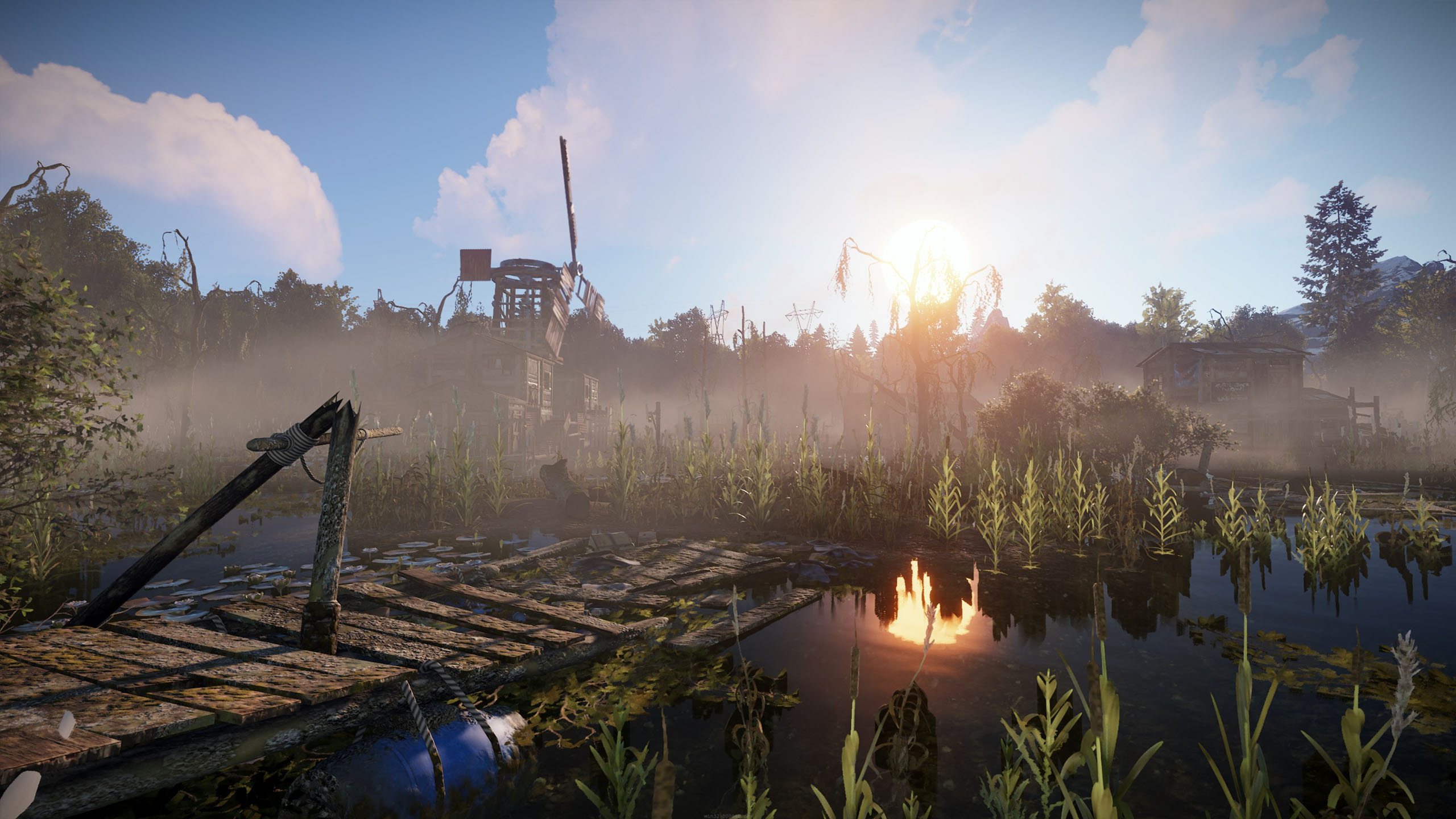 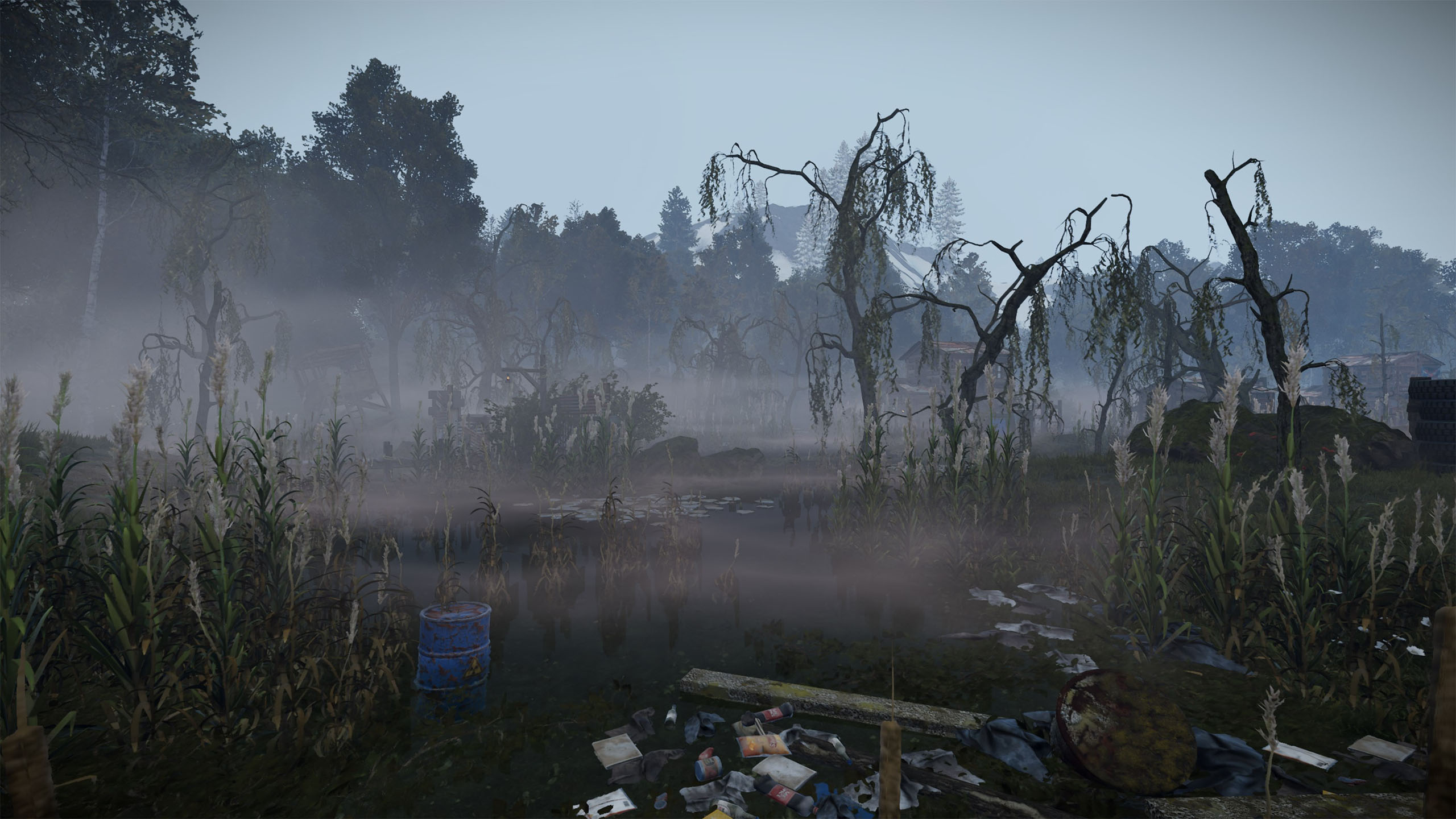 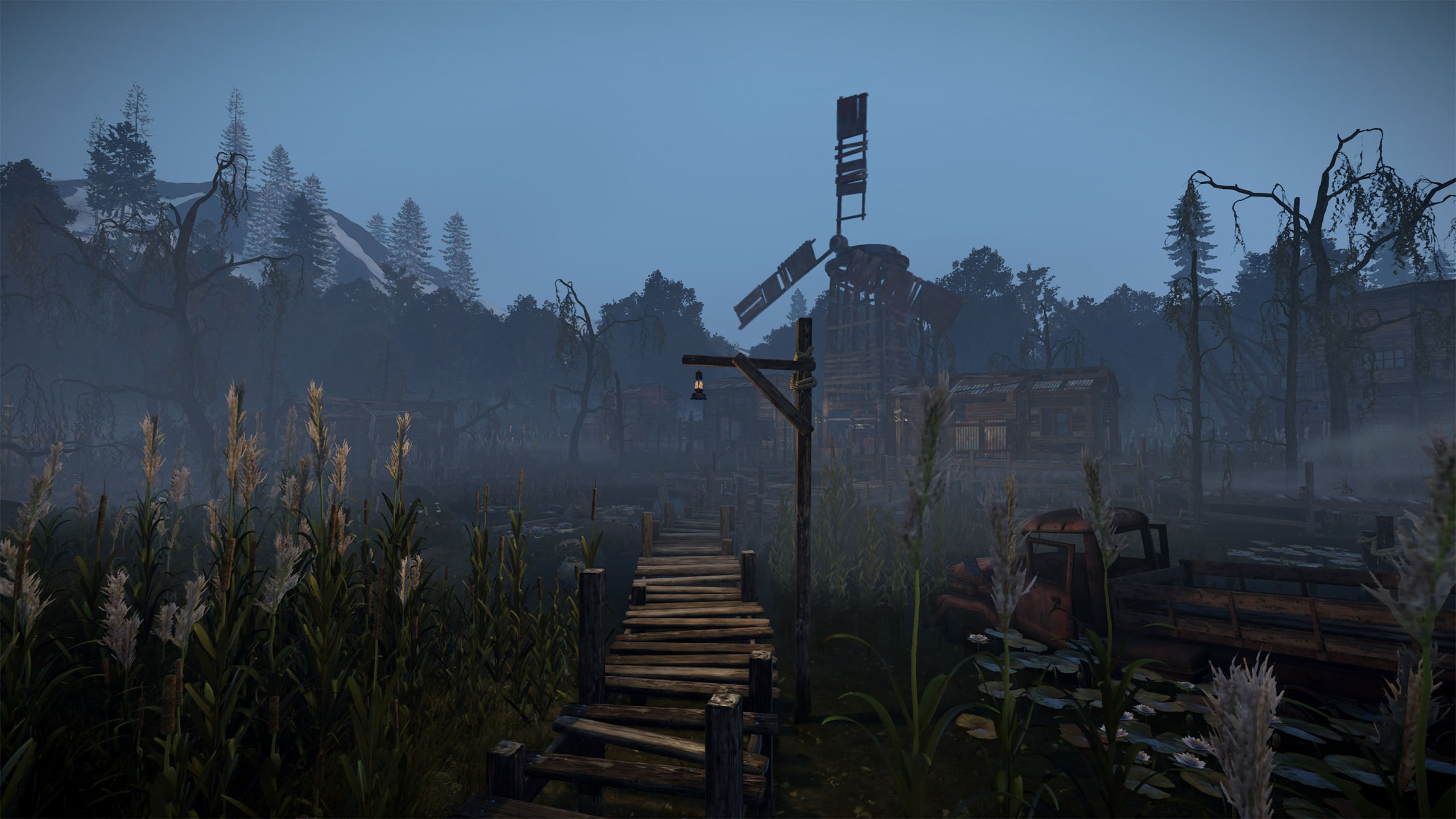 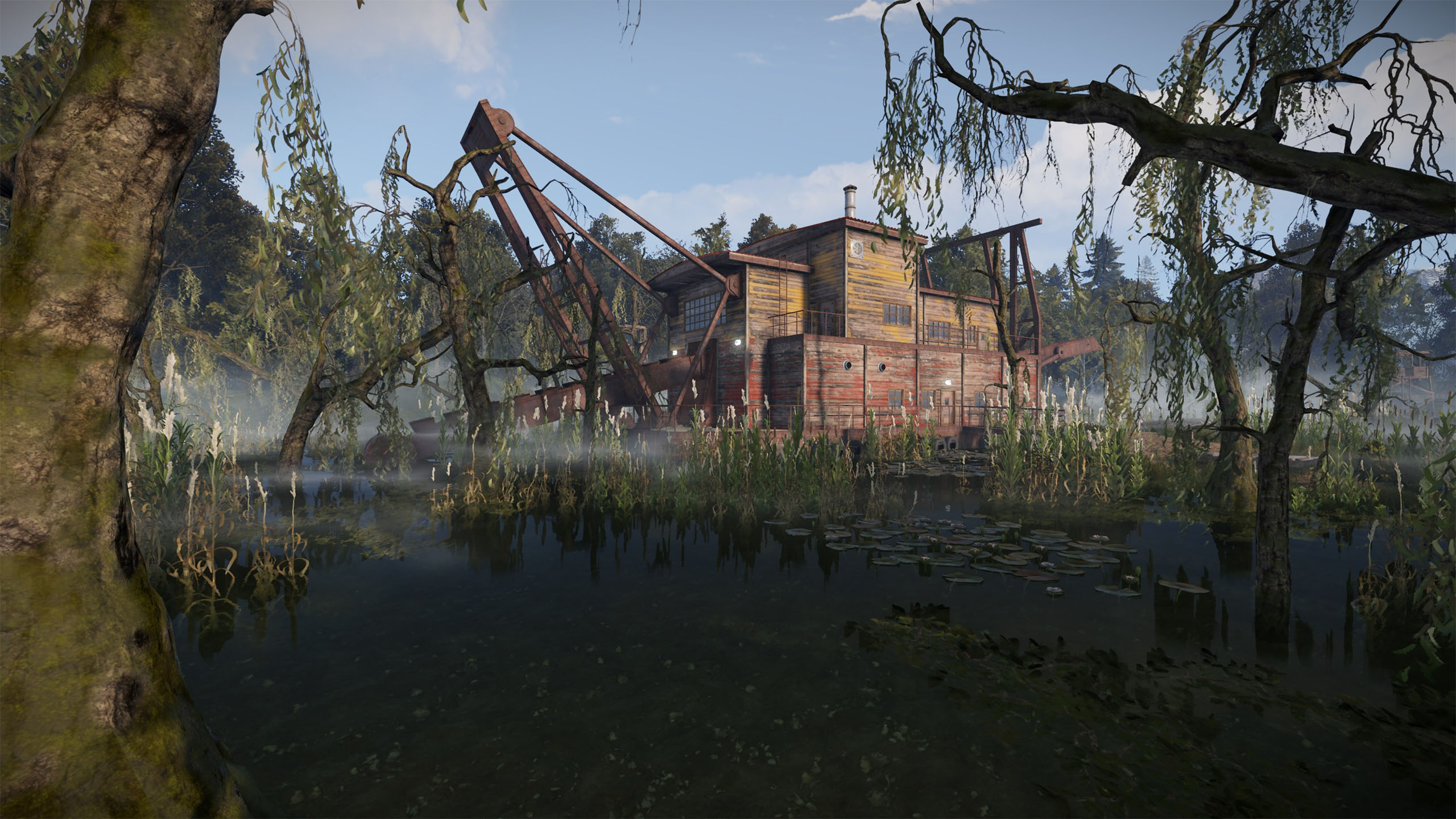 Environment Dress Assets
As Damian said, the bandit town has gone through some big changes. We're focusing on making it more lived in by creating some assets to "dress" the environment. These will be transferred over to other monuments, too. 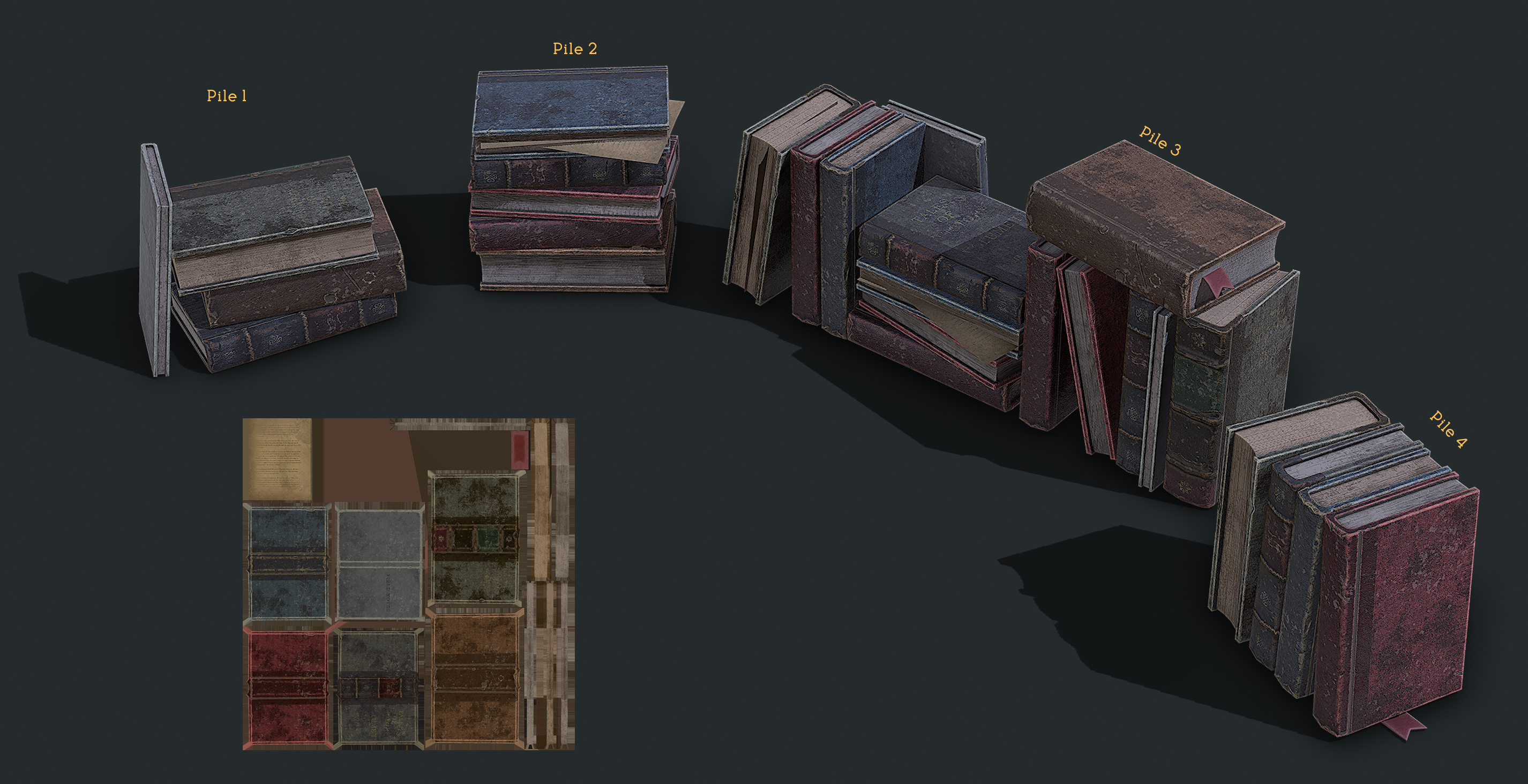 There's more inbound: hanging tools and shelves, etc. All so that we can really make the environment more relatable and not so shell like.

Jackhammer Artwork
This was a really fun tool to make. The design process with Paul and Alex felt very cohesive. There were a couple of iterations, but we're pretty happy with the outcome. If you'd like to have a look in 3D for yourself, take a look below.

C4 & Anti-Rad Model Art
I noticed the the C4 we're using is a seriously dated asset that I made ages ago and doesn't use the same art workflow as more recent assets (PBR texturing). So it looks kind of out of place. It even had a totally different icon to the actual model. I made some changes to the old one, replacing it for a bit of an upgrade.

It also made me realise that we don't have a model for the Anti-Radiation pills. So I made one. Hopefully these will look nice sitting in your hand as you dose up on all those radiation pills.

AI
Throwing melee weapons and tools at the Compound should no longer make Scientists go all crazy. Their heightened senses to certain stimuli needed to be checked.

Junkpile scientists came in force to servers last patch, due to a bug in the transition from the old to the new sensory system. They should now properly respect the maximum number of junkpile scientists allowed per server. Thankfully the load balancer seemed to be up to the task of over 200 junkpile scientists live on a server without causing any major performance hits.

All scientists should now be more properly glued to the ground when walking, and not levitate above the ground anymore.

Junkpile scientists have become hostile again, but only to those that get too close.

The technology that prevents animals from entering buildings saw some optimization this patch, but there are still a lot of improvements that can be made. It should help with performance, especially when large bases are raided.