All aboard! The Cargo Ship event is live. The CCSC Lazarus patrols the waters, packed with Scientists and loot. We've also added the L96 rifle, a new scope, tactical gloves, and more. This patch wipes the servers. Enjoy!

Cargo Ship Event
The CCSC Lazarus has arrived. This periodic server event will trigger every two to four in-game days. The ship will approach the island and patrol it at about 200 meters offshore. It contains valuable loot, but is also guarded by Scientists. 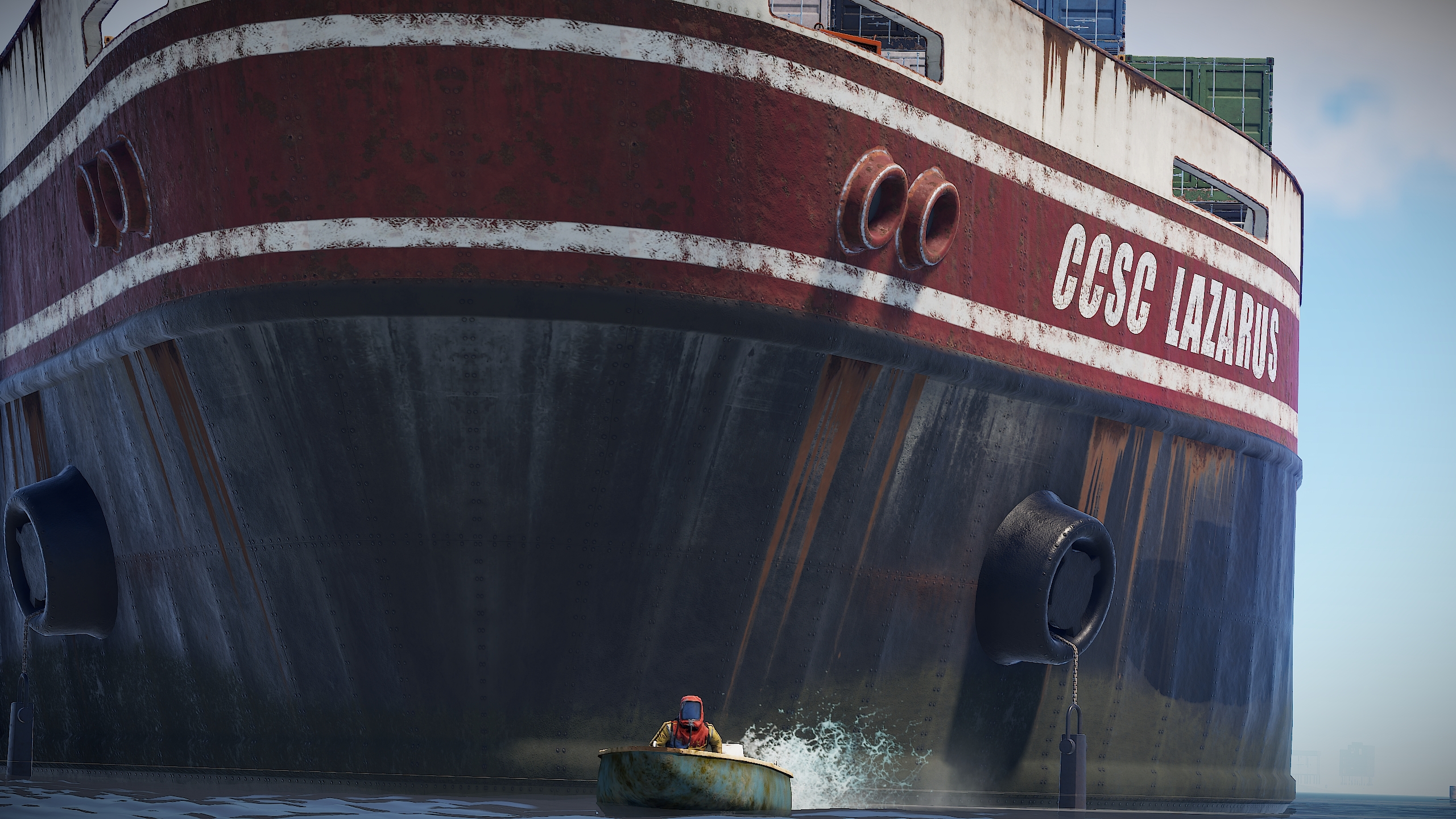 To board, you must approach it with a boat and mount one of the ladders on its sides with the 'use' key (attempting to jump to the ladder from one moving boat to another is almost impossible). When on board, and after clearing the defending Scientists, you can begin hacking the two codelocked crates. Defend the ship until access is granted. But be warned: all the other players on the server can see the ship on the map and hear it from kilometers away. The rear of the boat contains a RHIB you can use to escape. 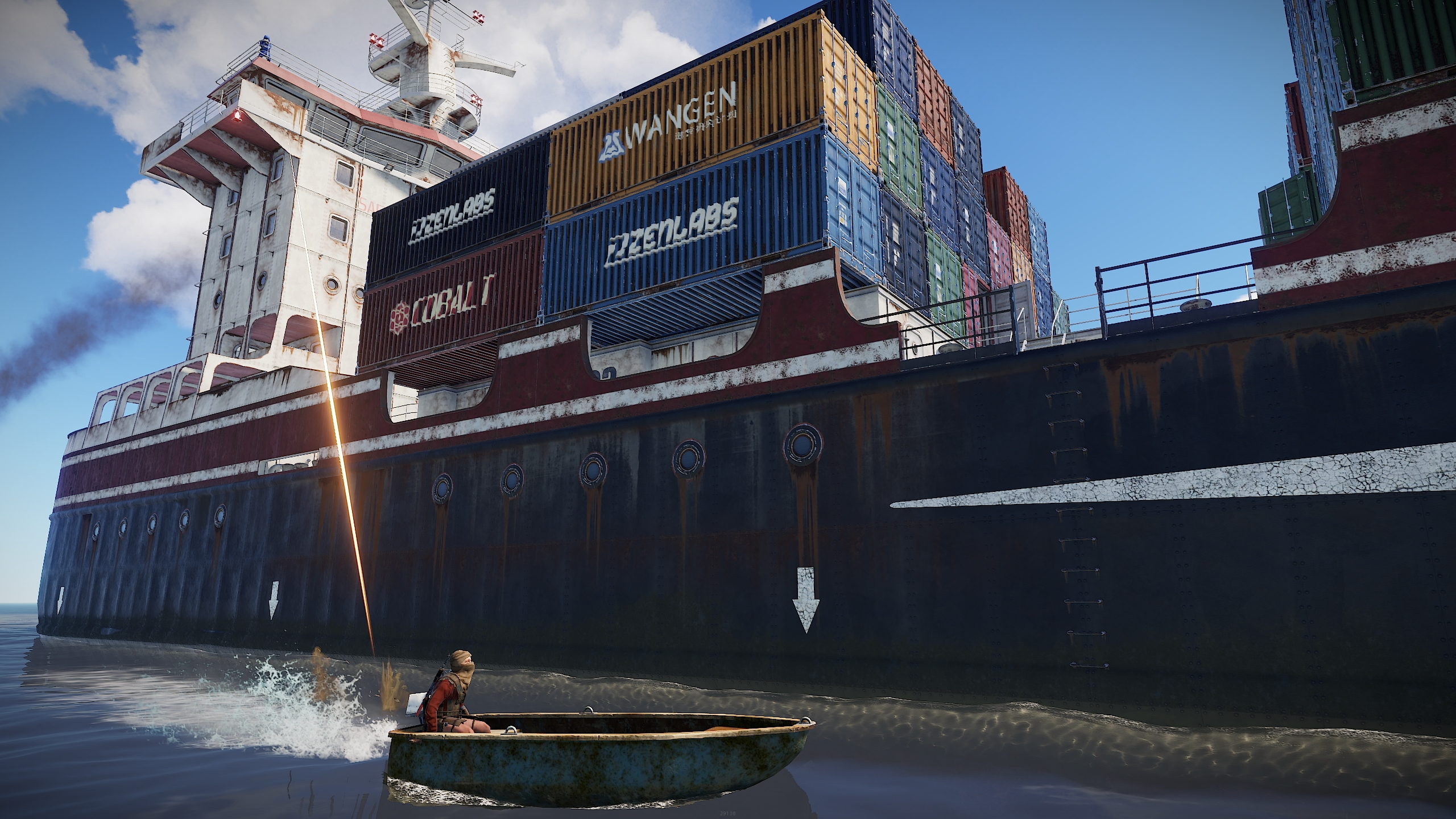 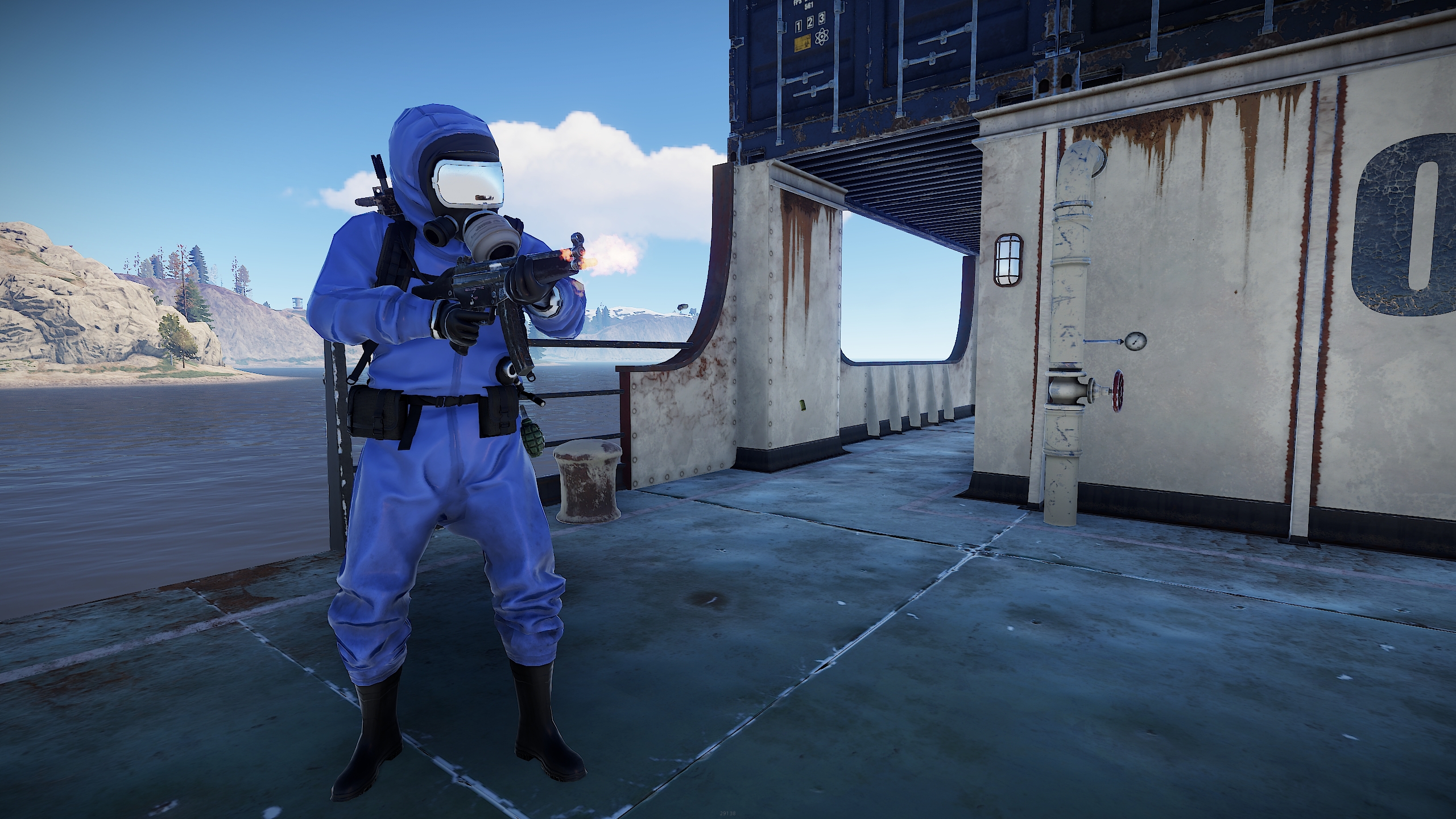 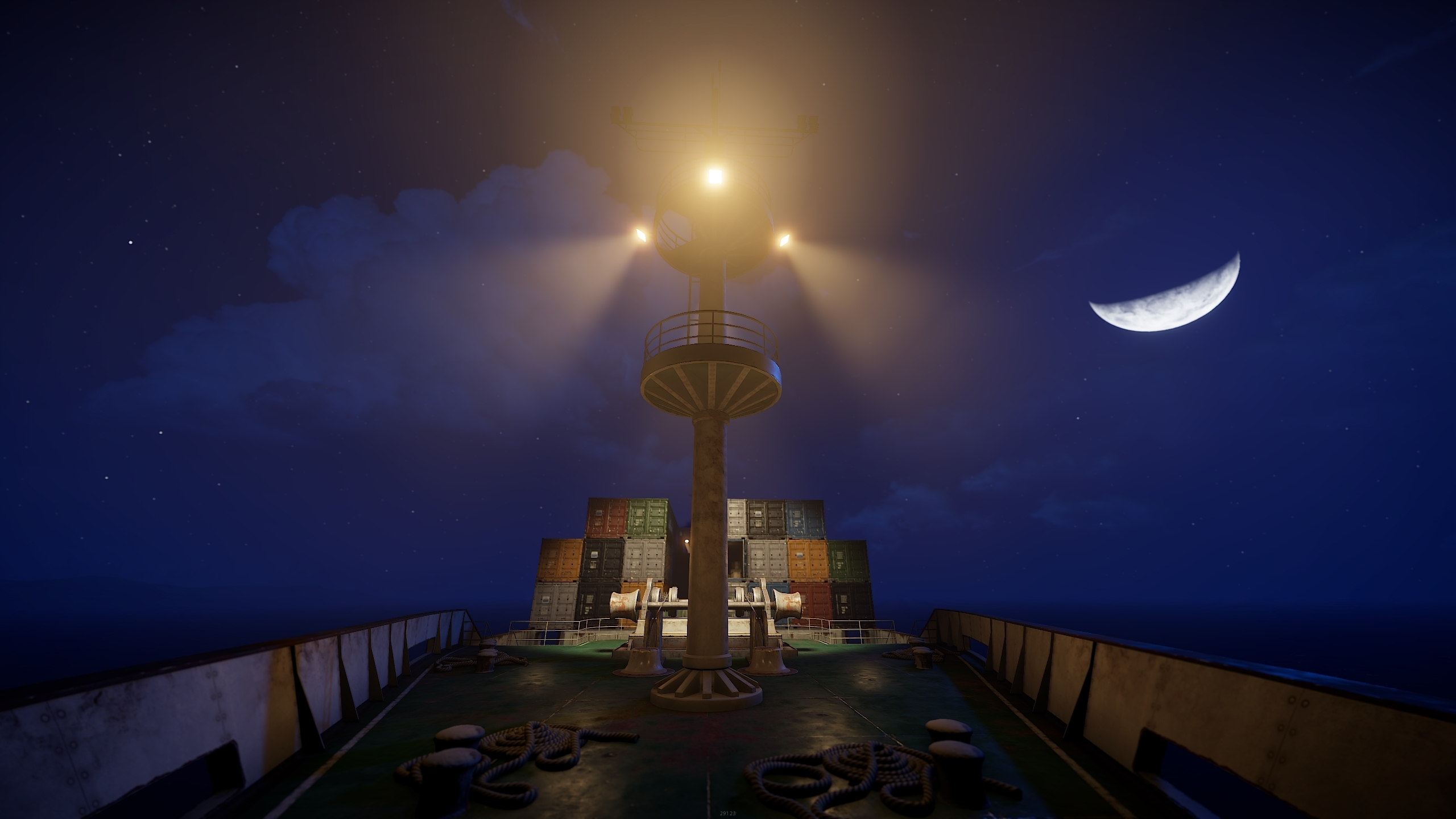 The radioactive waste on the ship is unstable, and if you hear the radiation alarm it’s time to depart or face certain death.

L96
A new bolt-action rifle has arrived! This is the L96. We're going through and making sure all the weapons have a military version, and this is the first. While the damage of the weapon remains largely the same, what you will notice is the extreme projectile velocity and range with very little damage drop off or bullet drop, making hitting targets at long-range much easier with barely any lead distance required. Exceptionally deadly when paired with the new 8x Scope and Tactical Gloves. 8x Scope
A new, higher magnification scope has been added to the game: 8x zoom! You'll find this for sale at the black market of the Bandit Town, and found rarely alongside an L96. The zoom is... extreme, and is really only useful on the single-shot style rifles. Another upgrade this scope has over the 4x are the bullet drop guides. Enjoy!

New Gloves
The new sets of gloves Taylor had been working on are now in-game. Burlap Gloves are a default blueprint and mainly provide protection from the elements. 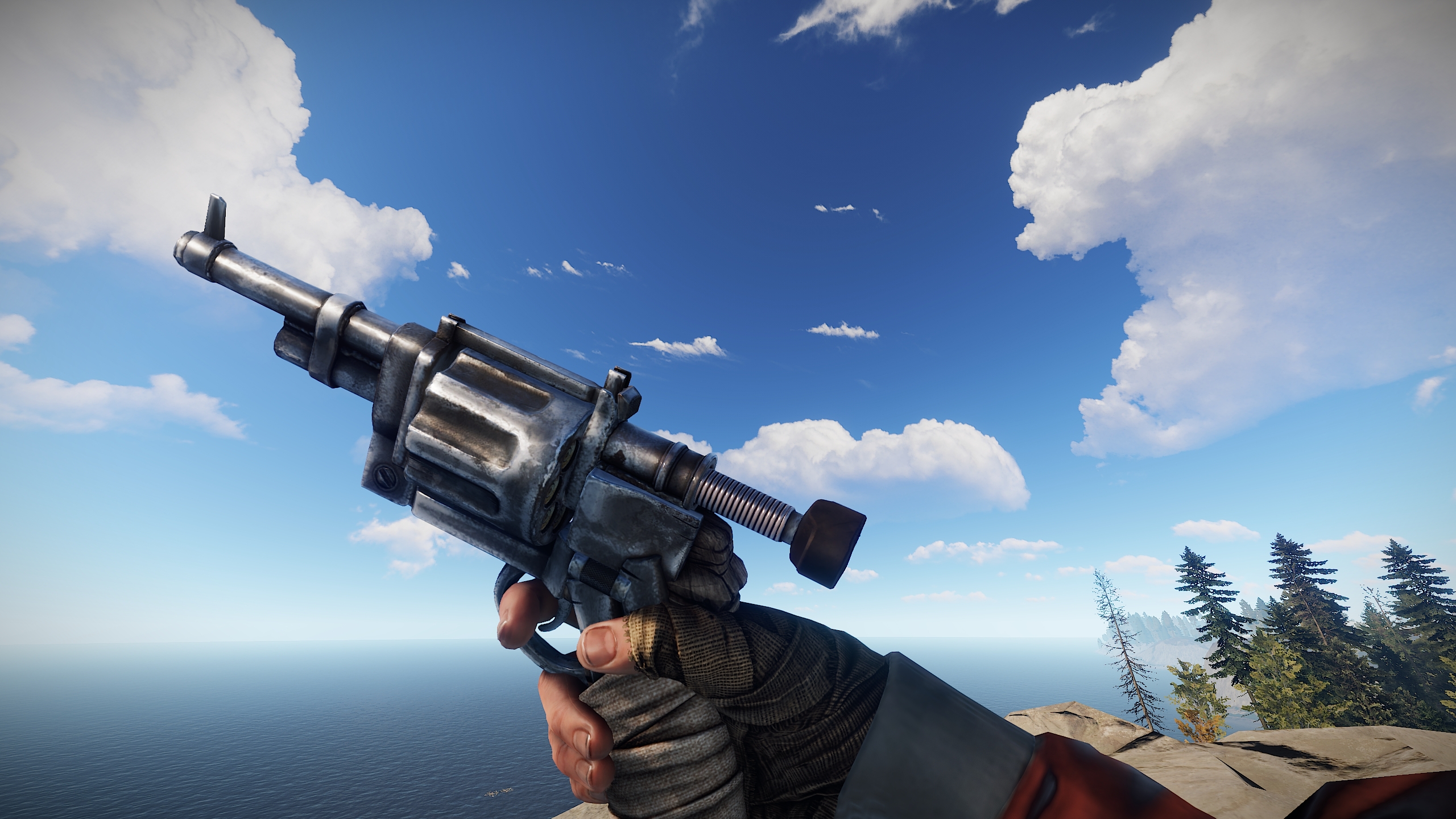 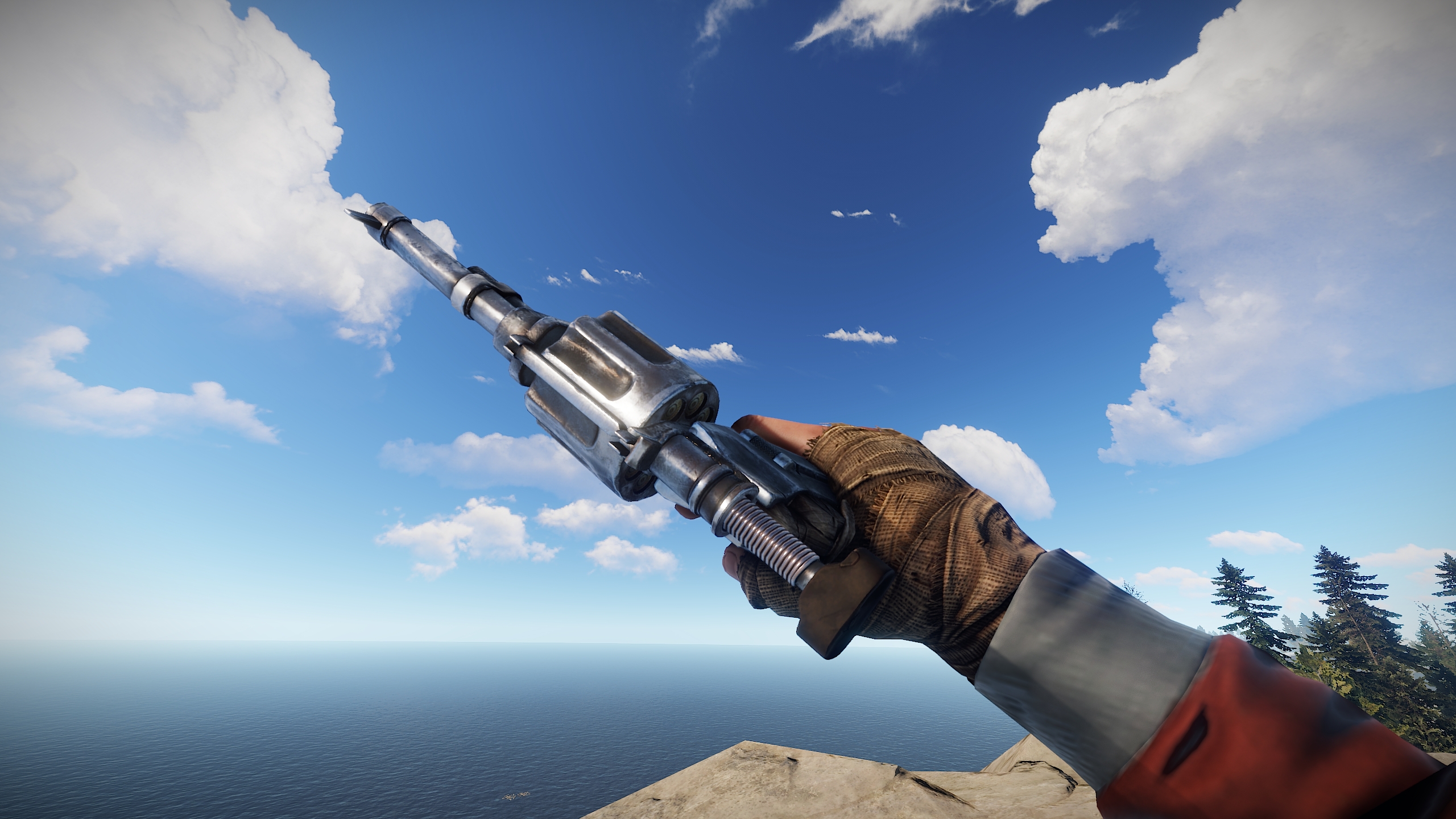 Leather Gloves fill the same role they used to. Roadsign Gloves offer additional protection over the Leather Gloves and can be found at the Bandit Town. 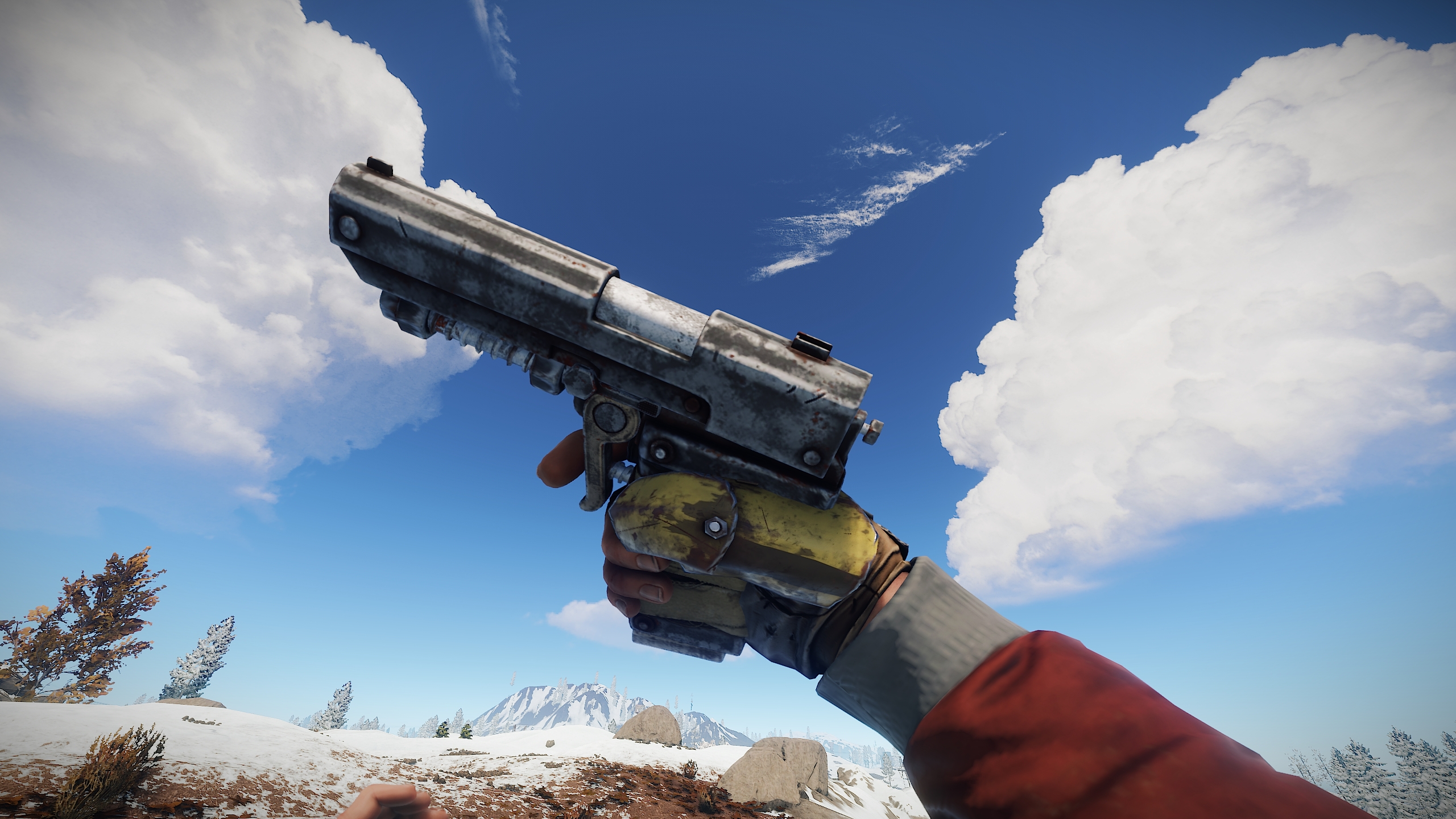 Tactical Gloves are uncraftable and provide some protection, but their main advantage is the complete elimination of aim sway. You can find these in the Scientist Compound. 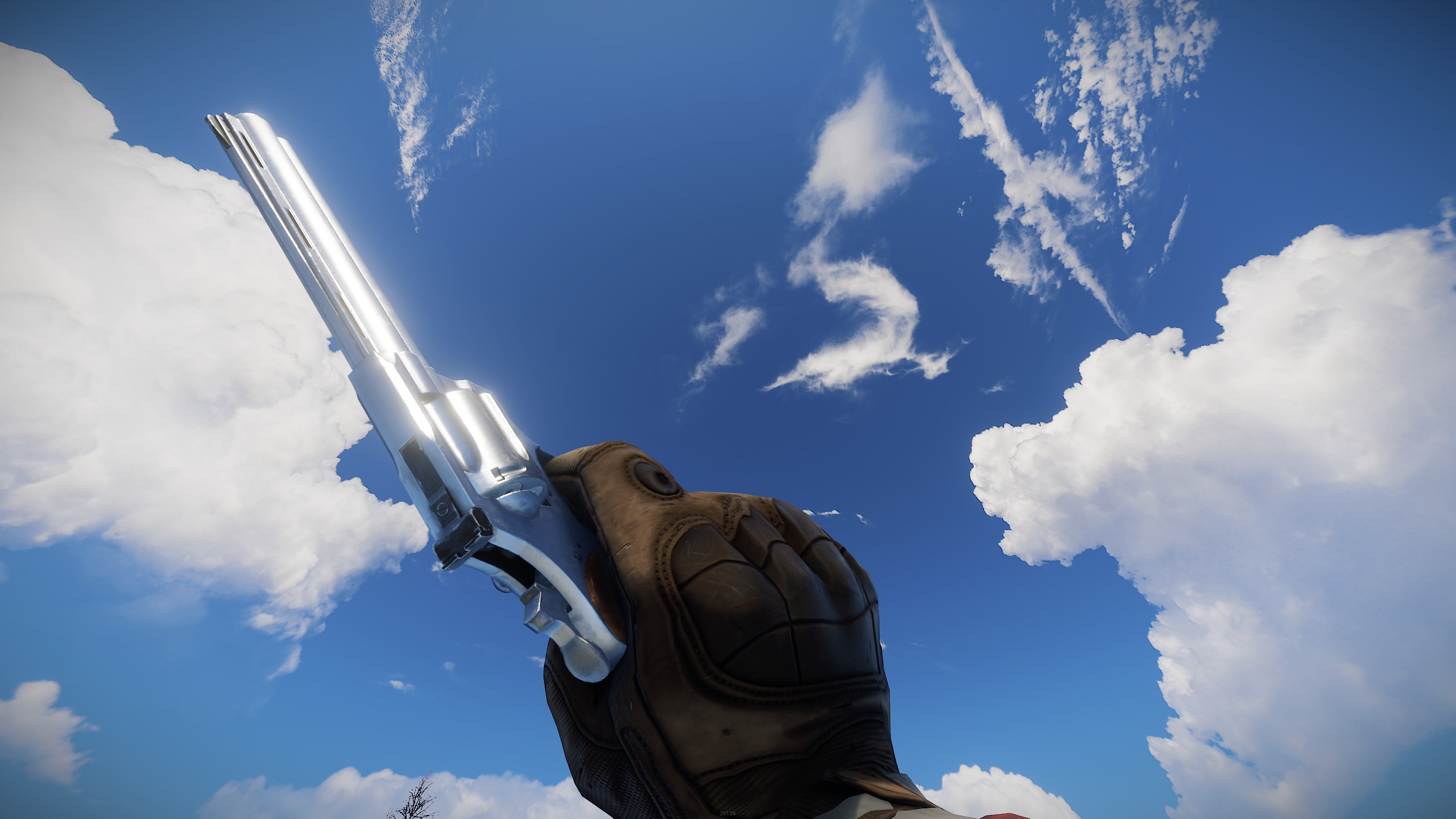 Extra Clothing Slot
You asked and we delivered. Eventually... You now have an additional clothing slot, the only real downside here is the locker UI looks slightly ugly as the belt section will display 7 slots instead of 6 until the next patch. Other than that it works as you'd expect, and you no longer have to pick between boots and gloves! Parented Entity Movement
Aside from working on various tasks for the new ship I spent the majority of my month on implementing parented entity movement. This is the concept that entities (players, AI and physics objects) can smoothly enter and leave moving objects and correctly inherit their velocity. As you might imagine this includes a lot of special cases to handle, particularly when adding it to an existing game. In the end it all seems to have worked out and we now have a solid foundation to build upon with future vehicles. Here I am jumping on and off a shitty test platform:


This system is already in use on the new Cargo Ship!

Monument Optimizations
We're not done optimizing yet. Actually, now that we are finally GPU limited we can finally see real improvements with smaller graphics optimizations.

In this case, we heard your complaints regarding performance and tracked down a big rendering bottleneck in the Military Tunnels. We were eventually able to replicate across all monuments with varying degrees of impact. It was caused by shadow rendering and is now finally mitigated.

This optimization should give you all a decent boost in FPS:

Please take my results with a grain of salt because results may vary across hardware combinations. The hardware used for this test was a i7-6700K CPU combined with a GTX 970 GPU.

Monument Lighting
This is a simple feature that can make a big difference in some monuments. A conditional lighting system that can transition hundreds of lights from ON/OFF states depending on whatever conditions we choose.

For example, in this case we are turning the Cargo Ship's lights OFF during a short period of the day time where we get most sunlight:

This should open some possibilities and make our monuments more interesting or more realistic depending on different conditions, like day time or weather.

Tree Impostor Shadows
Last patch we introduced a fairly decent optimization for Sun/Moon shadow rendering for Tree Impostors. However, it turned out to negatively affect other types of lights. After we rolled out a post-patch performance fix that, we started getting some crashes.

We eventually tracked it down to Unity's graphics jobs and we already submitted a bug report to their support team. In the meantime, we've disabled shadows for Tree Impostors, which unless you're using really low settings, are mostly noticeable on distant trees. They'll be reintroduced as soon as we get a bug fixed version of Unity.

AI
This month has predominantly been about solving the issues related to spawning Scientists on the Cargo Ship.

The information Scientist AI use on land to understand where they can and can not move is called Navigation Mesh, but this technology cannot move, so it was useless on a moving Cargo Ship.

Instead we had to extend the custom A* pathfinding and waypoint system we wrote for the Bradley to support Scientists in such a way that they can move, take cover and navigate on the Cargo Ship intelligently, while the ship is moving. 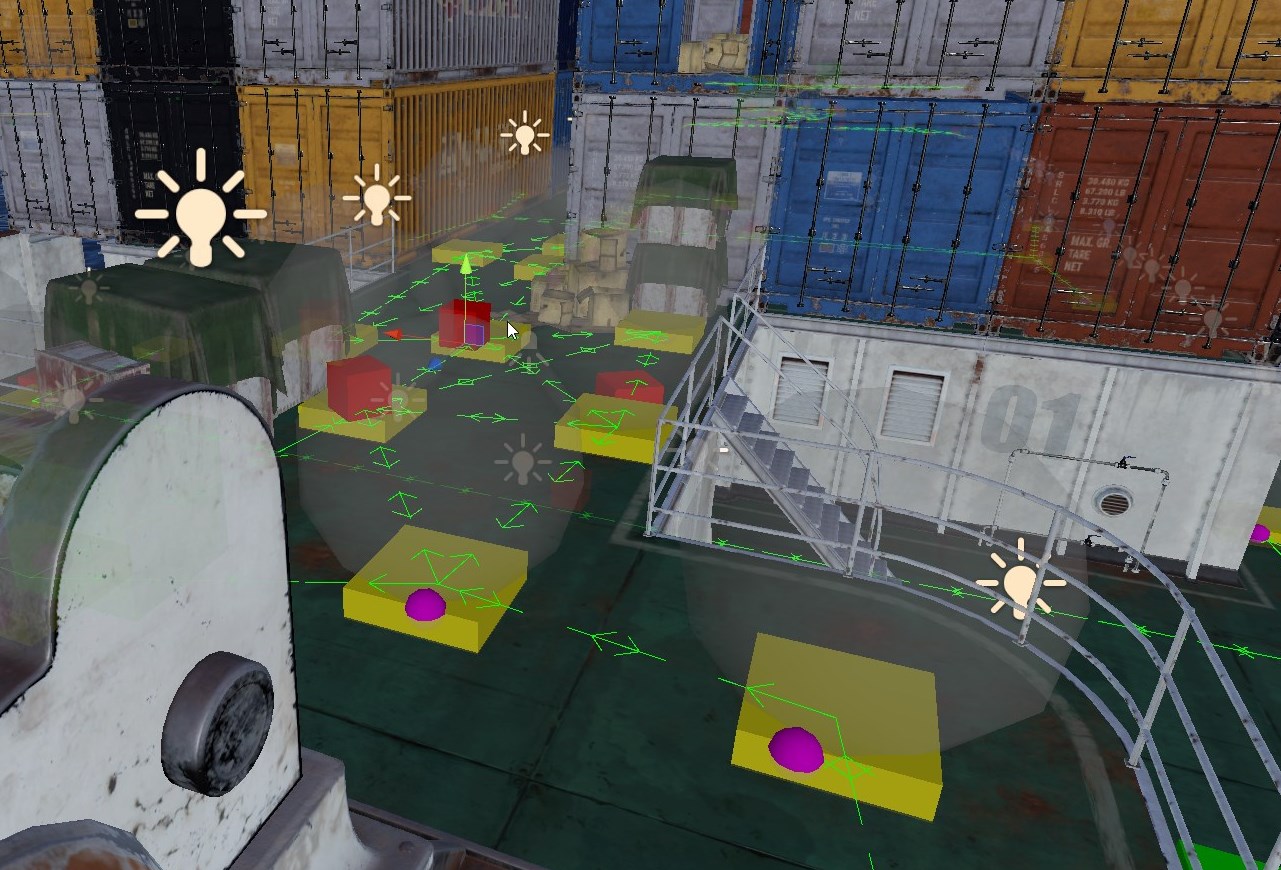 I also integrated a variant of the Scientists that never move and will act like turrets. We have positioned them at strategic locations on the ship, mainly to shoot at boats that come too close.

I also tweaked the Scientists present at the Military Tunnel some more. Health for the Scientists there have been tuned down a little bit, they should not hit headshots as easily and some of the Scientists won’t have as good an aim at a long distance. The Scientist spawners have been fixed so that the countdown clock for the next spawn don't start until all Scientists in a group is dead. To balance out this reduced difficulty, a couple more Scientists will spawn in the tunnels, and they throw grenades in more situations.

New Plants
This month I worked on two new sets of plants for the new farming updates. I made a potato plant and a set of berry bushes that come in different color variants. Below are some screenshots of the new plants and their different growth stages. In addition, the old hemp plant was in need of an overhaul to bring it in line with the quality of new foliage we've made over the past few months. The new model is of much higher quality and should blend with the environment a bit better. Hot Air Balloon
Some of you might have spotted a hot air balloon development branch. While not ready yet, you should be able to board it in a future update and see the Rust island from a different point of view: Some details need to be ironed out and polished still, such as ropes and netting. I will attempt to make the top part of the balloon skinnable as well for those of you who feel creative.

SAM Site
Just like the Hot Air Balloon above, some of you spotted this one in the commits. Some visuals have been shared already throughout last month, but for any of you that might have missed it this is what the SAM Site will look like: It has yet to be implemented, but expect it to come in play when there'll be things to shoot at in the sky.