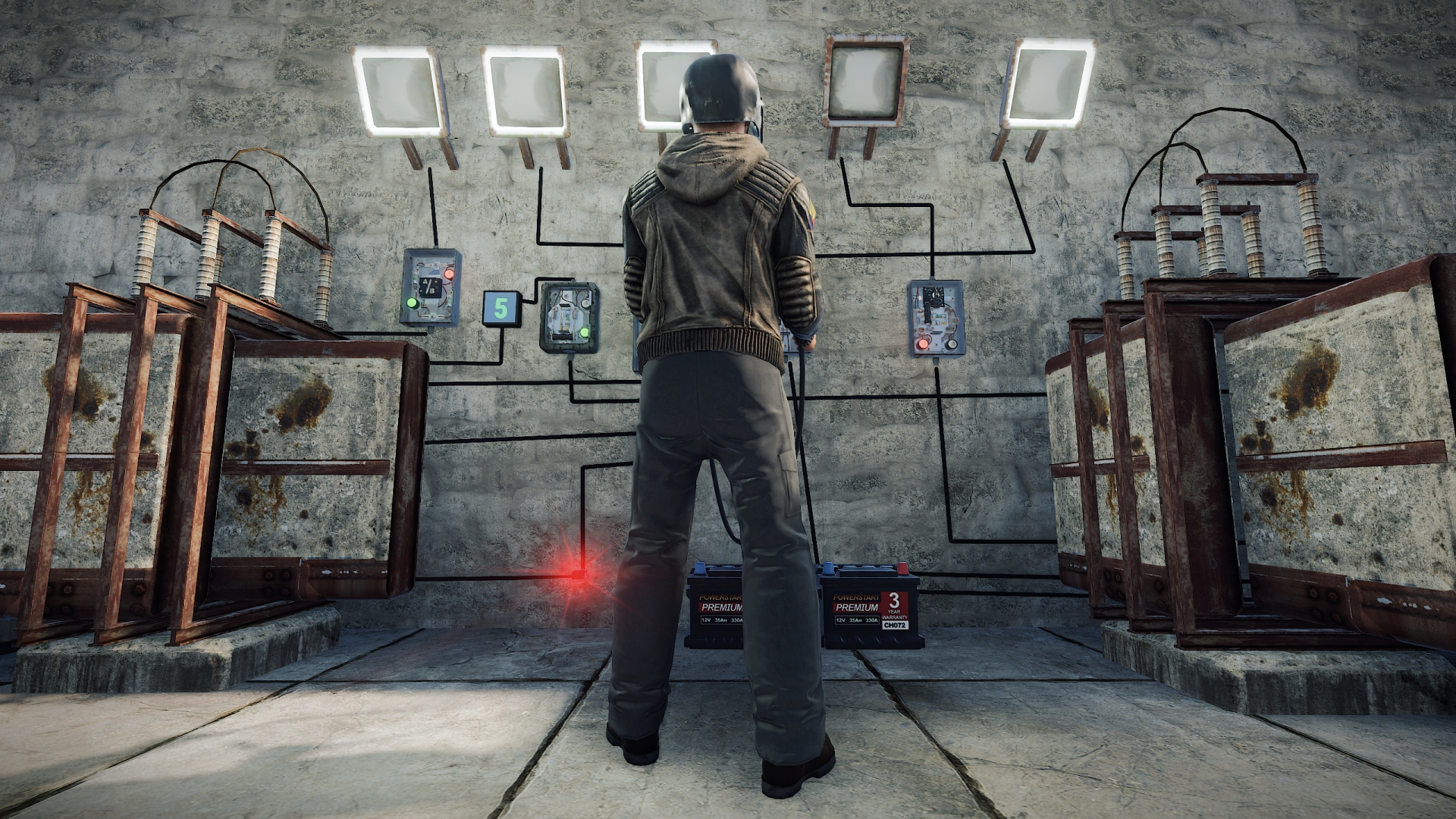 Electricity
Welp, that was fun.

Electricty has been added to the game! I've been wanting to do this for a long time and finally decided to take the plunge this month and get it implemented. It's not totally finished, but all of the heavy lifting has been done so we'll be able to expand on it with ease in the coming months.

Electrical Components
Here is a list of all of the new electrical components added to the game:

AND Switch
Only allows passthrough when BOTH inputs receive power

Counter
Allows passthrough when a target value has been reached

Blocker
Disables passthrough when power is received through its second input

Laser Detector
Long range player detector, allows passthrough while a body is in the beam

Solar Panel
Outputs 30 energy maximally, when the sun is directly infront of it with no occlusion

Timer
Allows passthrough while timer is active, can be customized with any duration and force toggled on via its second input

Windmill
Outputs 100 power when the wind is strong, higher chance for stronger wind with altitude​

In short, we now have a fully functional logic gate system in Rust. Right now you'll be able to do something as simple as adding a working lightswitch to your base, or as advanced as making a functional CPU in the game. 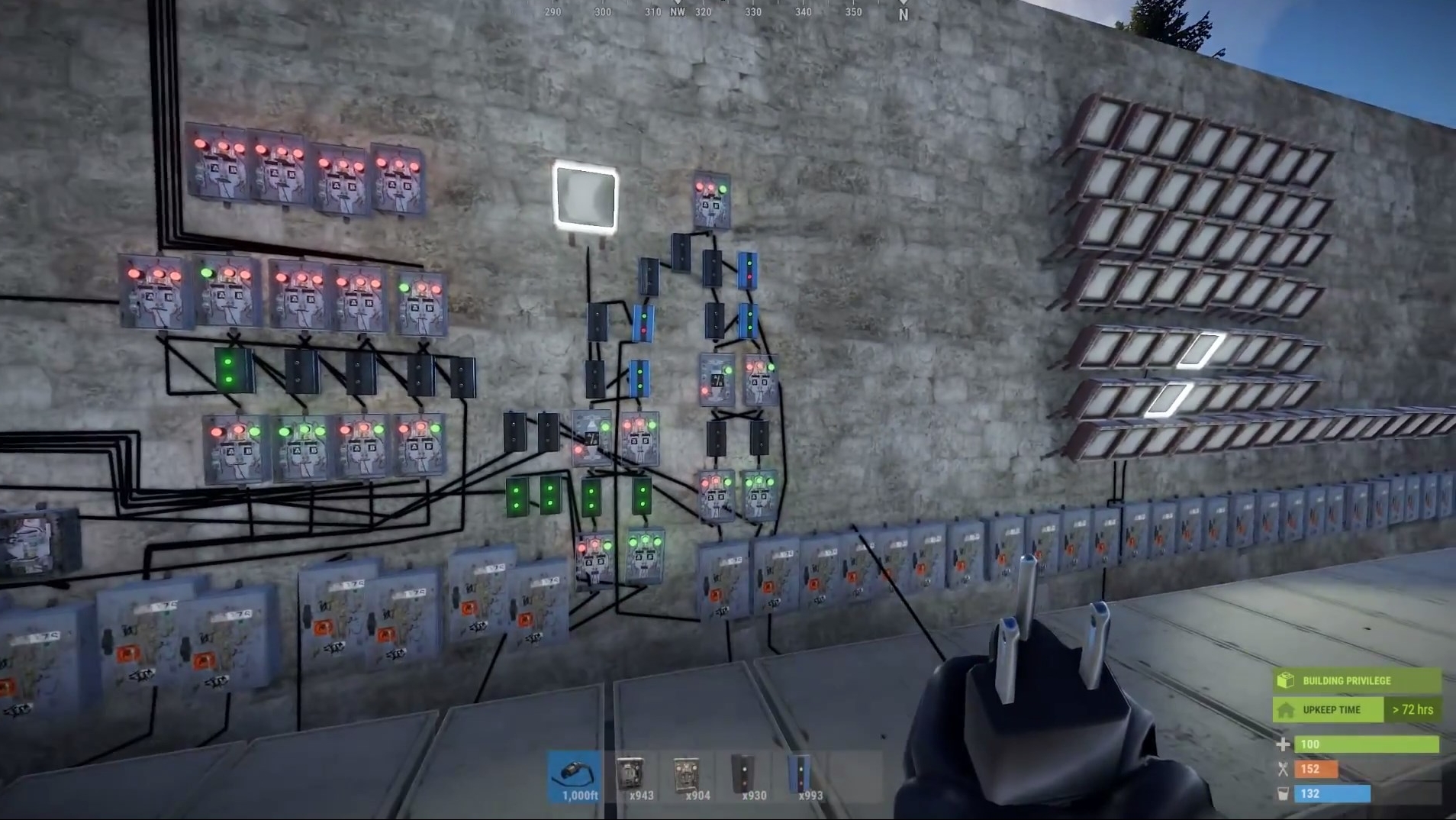 The main use for this is going to be making godlike trap bases. Moving forward, I'm going to add a lot more components which will let people do things such as move inventory items around for automatic sorters or to collect loot from failed raid attempts. Factory type deployables are a must. The list goes on and on.

This was a major undertaking and I want to give a special thanks to Shadowfrax, Vice, and Andre for helping me get it completed in time for the patch. I'm super excited to see all the things you guys come up with!

M39
We've added the M39 Rifle to the game. This rifle is the military grade counterpart to the SAR. You'll be able to find it in the advanced crates (military/bradley/locked/airdrop) rarely, and it is, of course, uncraftable. We're going to be doing a revamp of the way the NPC vendors work in the coming month(s) so that the available items are no longer static, and we'll throw the M39 into the rotating loot table.

Happy Birthday Rust
Just over 6 years ago I fired up Unity and created a new untitled project. I was going to make a survival game I wanted to play. I didn't know if it would make it past the prototype stage and I most certainly had no idea it would go on to become such a hugely successful game spawning endless memories and stories of exploration, defeat, victory, loss, and often rage.

On December 11th, 2018 Rust will have been on Steam for five years. That's a third of my adult life. Words cannot express how thankful I am it has been well received and that people continue to play and enjoy it. Rust wouldn't be what it is today without the entire team of extremely talented professionals I have had the pleasure of working with at Facepunch Studios. The long hours and dedication they show for Rust makes it what it is today.

Thank you all again. And, hey, maybe I’ll be writing another one of these in 5 years! 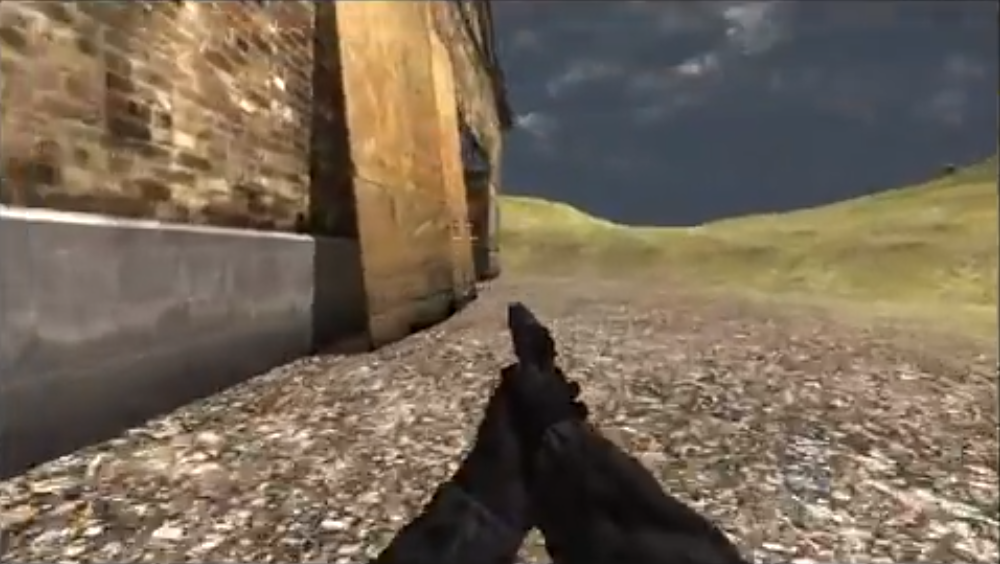 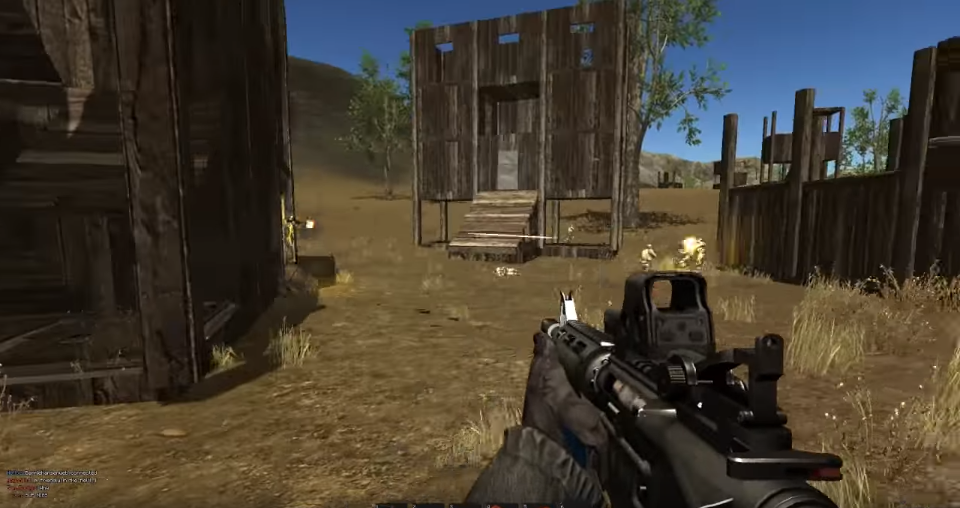 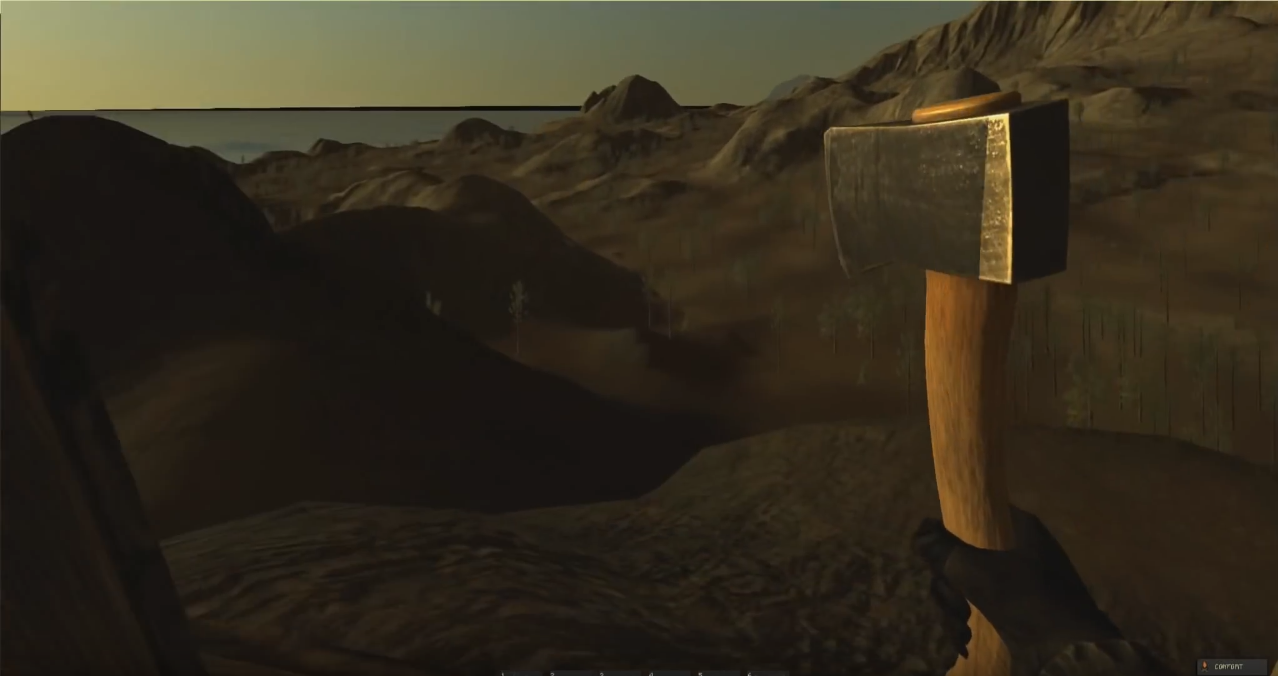 Bow Overhaul
André Straubmeier
The bow had a couple of issues that made it feel unresponsive and weird.

Elevator Entity Parenting
I updated all the elevators in the game (both bucket and cabin lifts) to the entity parenting system that's used by our vehicles and the cargo ship. Things should feel a lot smoother and less glitchy.

Underwear
Our third censorship option has finally arrived: underwear. This should be particularly useful for streamers, although we do not expect it to automatically solve all demonetization issues. You can enable it in the options menu. 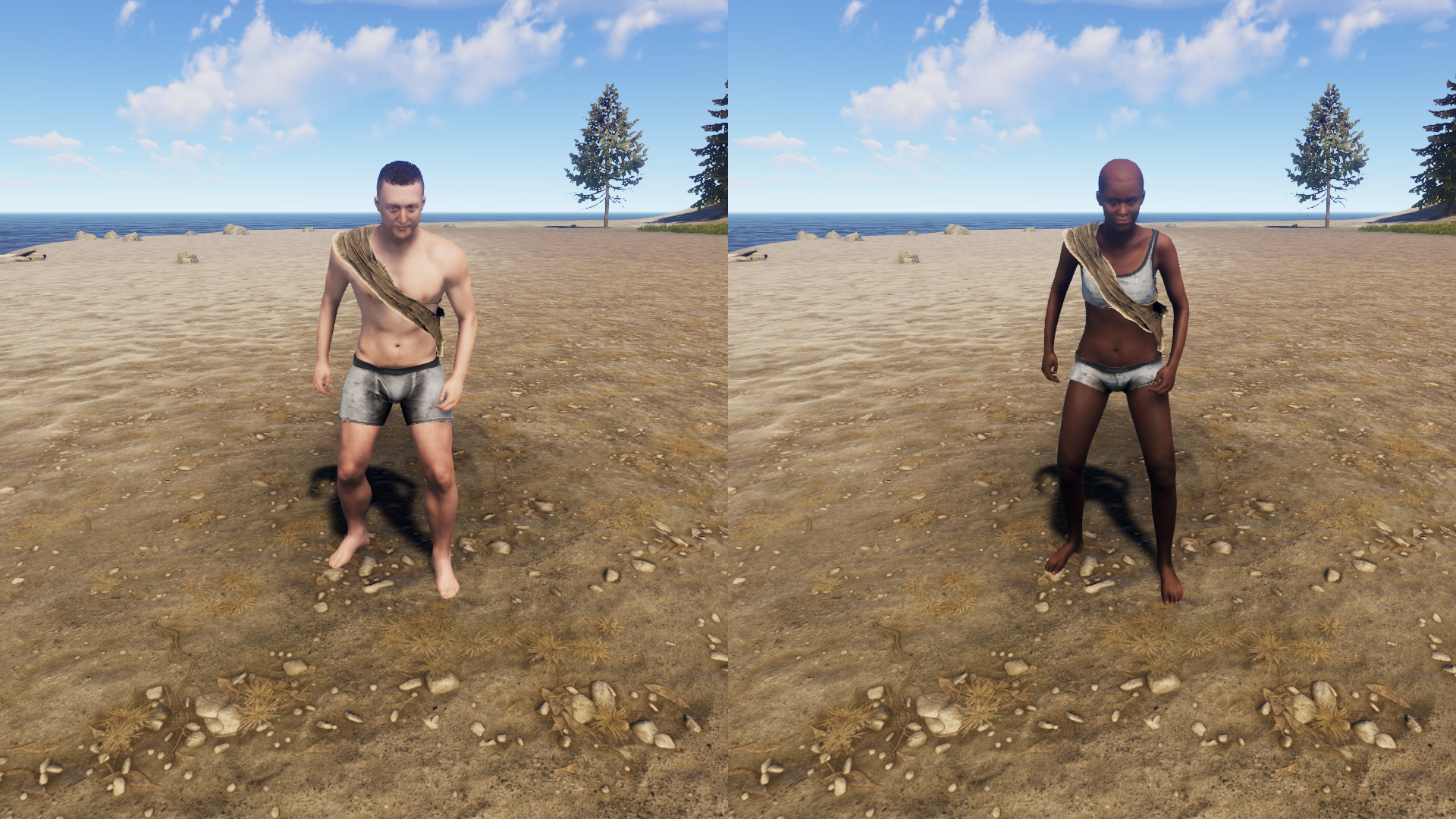 Cargo Ship Improvements
Impact particle effects on the cargo ship have been updated to be simulated in local space, so they no longer look completely out of place and go crazy when the ship moves along. More importantly, you can now deploy ladders anywhere on the ship. This can, for example, be used to board it from different directions and surprise other players that are already on board. 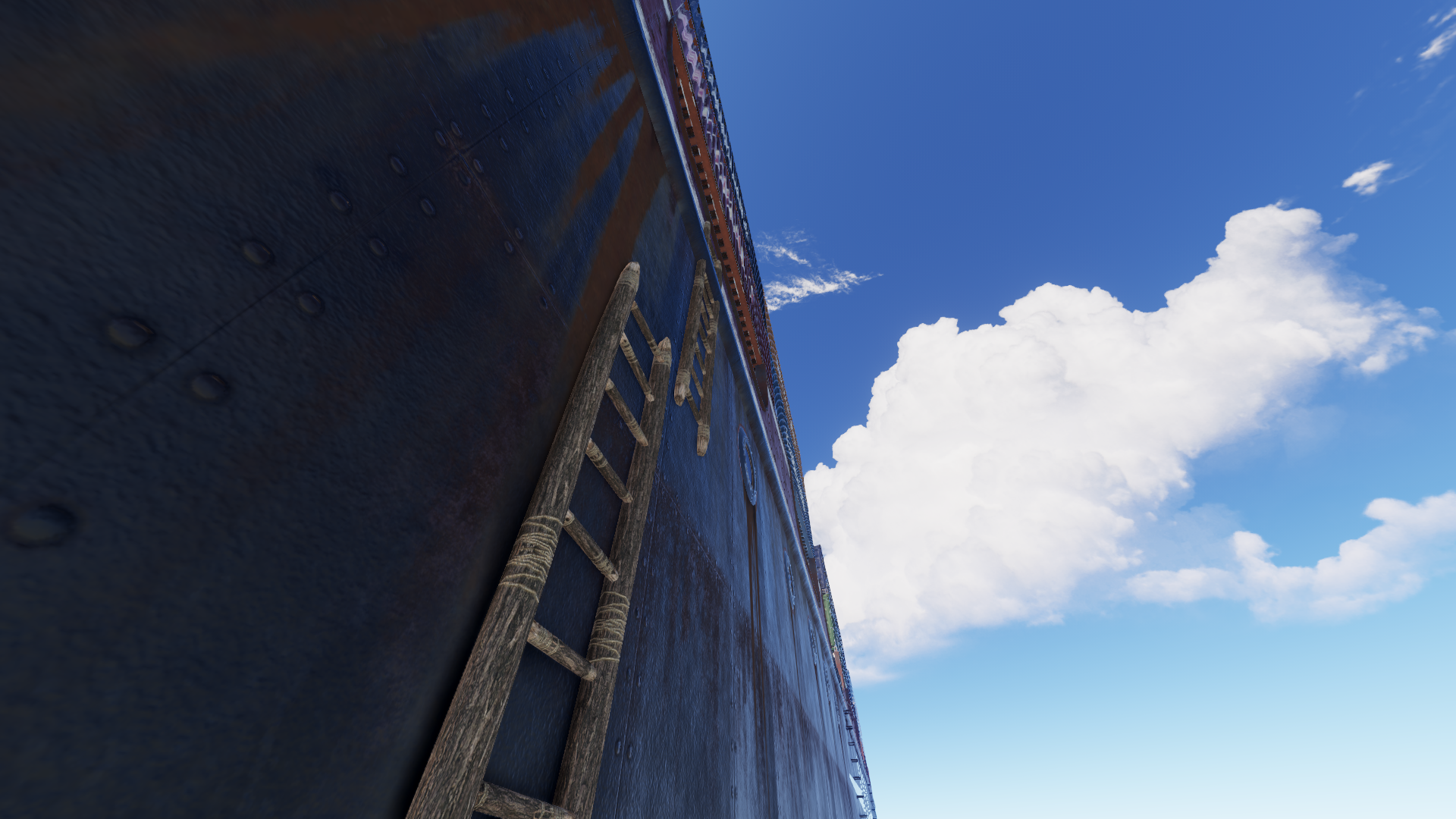 Invalid Projectiles
I debugged and tracked down two anti-hack issues that could cause a "reload_cooldown" message in combat log followed by several "projectile_invalid" messages. Things should feel much more solid now.

Looting Changes
We decided to change the storage box loot pouch: it is now dropped at the location the last damage was received at. This way raiders can control where the loot is going to be dropped to a certain degree, which will make some loot room layouts obsolete.

Rust.World
André Straubmeier
Just a couple of quick changes for the custom maps.

Barge
Damian Lazarski
One of the things I worked on in the past month was a barge that will eventually serve as a spawn point for new players. The idea is for these barges to circle around the island and allow players to jump off at any point and swim to the shore. They're not in the game this patch, but here's what they look like: 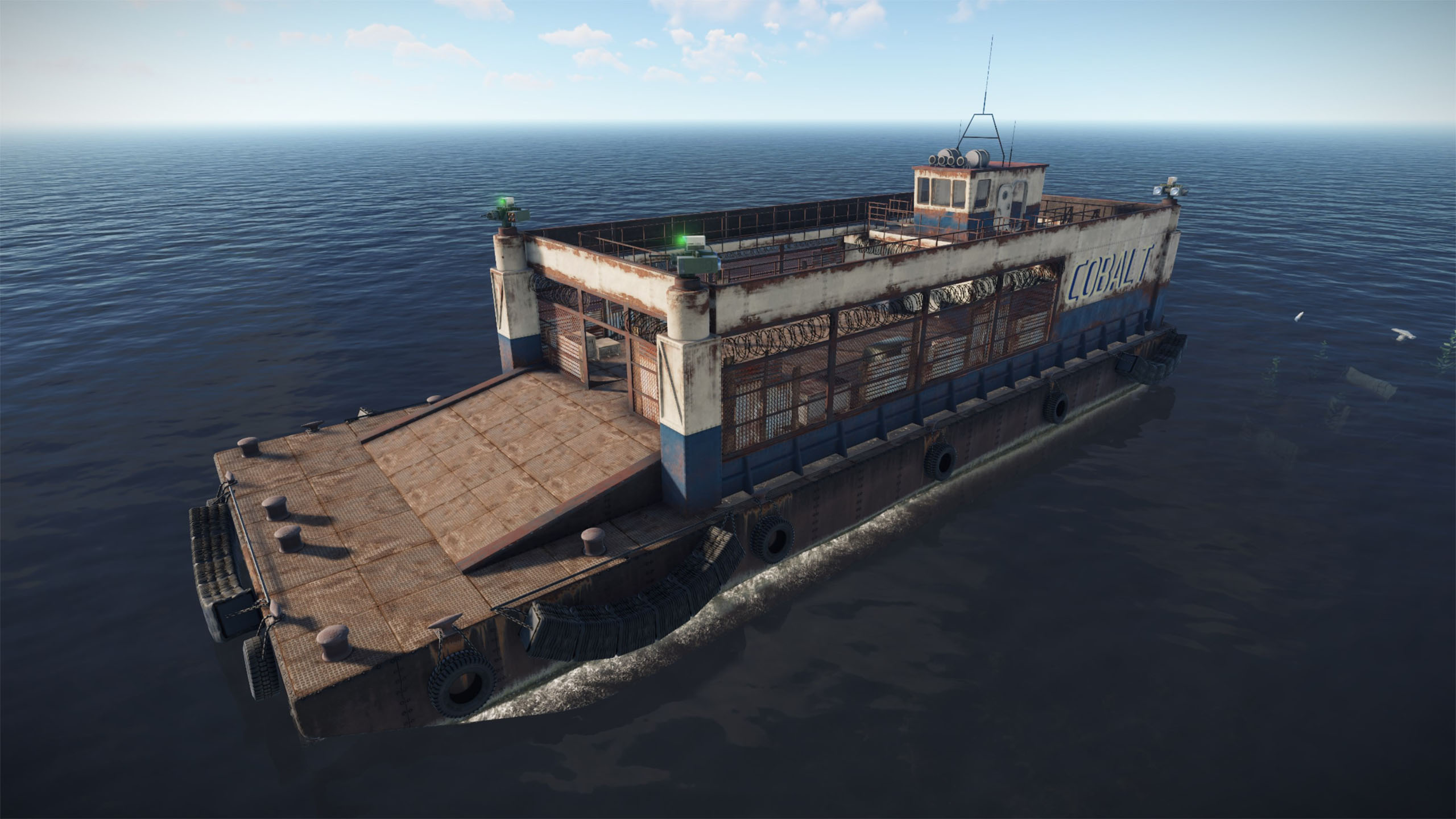 Oil Rig
Now that we have a lot of functional water gameplay mechanics, an oil rig seems like a natural progression for monuments in the game. The rig should play like an event. I am currently working on this with Damian, and we are on track to release at the beginning of next year. More details will follow as we progress through it.

AI
This month, the Junkpile Scientists and Military Tunnel Lab Scientists were moved onto the new AI system that has been running the Scientist brains at the Military Tunnel since August. This means that the NPCs should now be much faster at reacting to you, using junkpiles for cover, and generally put up a much-improved challenge to pesty scavengers that disturb their important research.

Military Tunnel Scientists, in general, got better at using cover tactically during gunfights and should throw grenades more often. They stay back and wait for players to push them most of the time, but can get frustrated enough that they push the player’s position as well. Scientists will now run slower sideways and backwards, much like a player would.

Facepunch End Of Year Blog
I made an end of year post over on our company blog. It has some historic pondering and stats some of you guys might be interested in. For the rest of you it'll also reveal how to get this helmet. 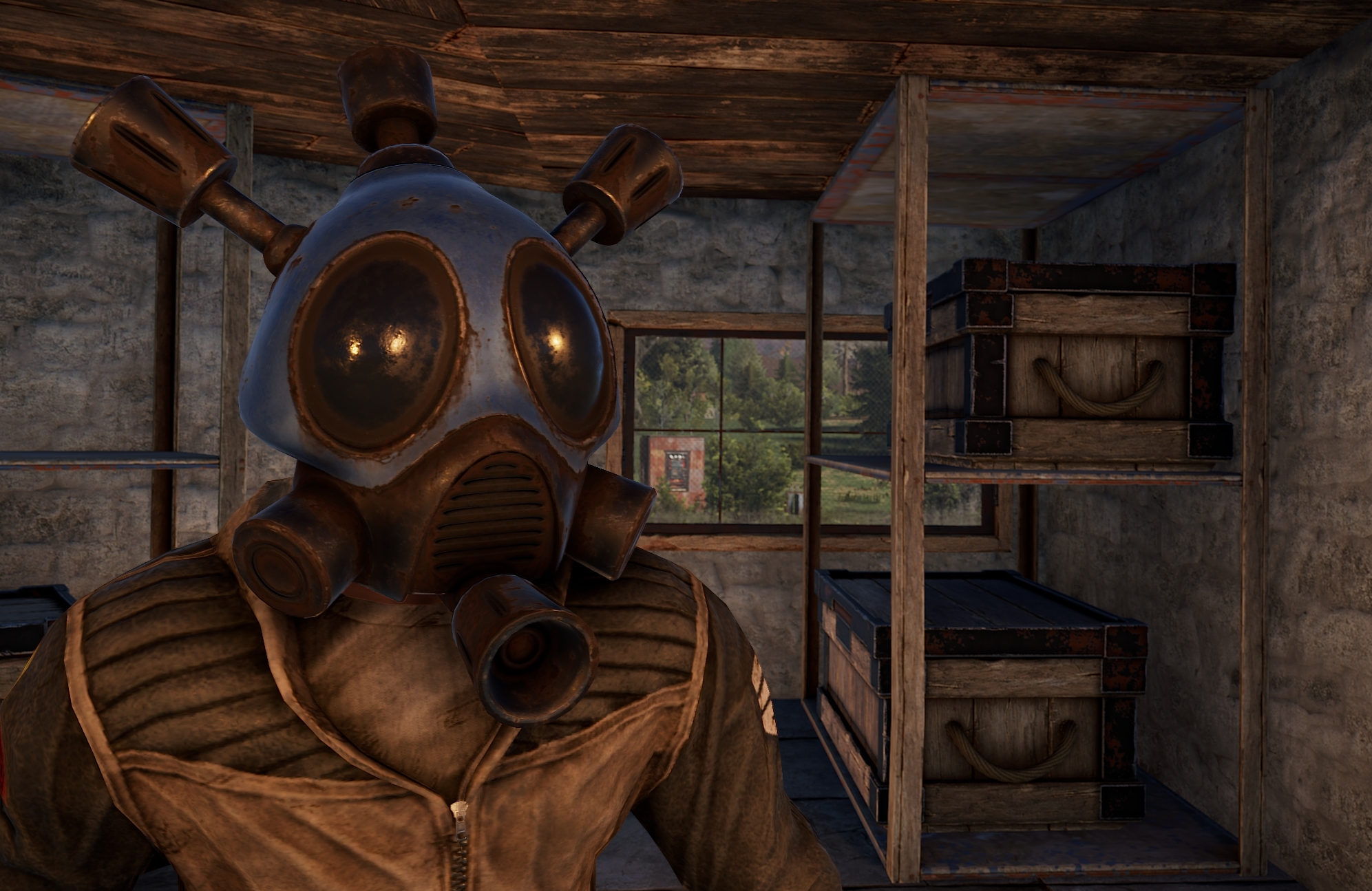