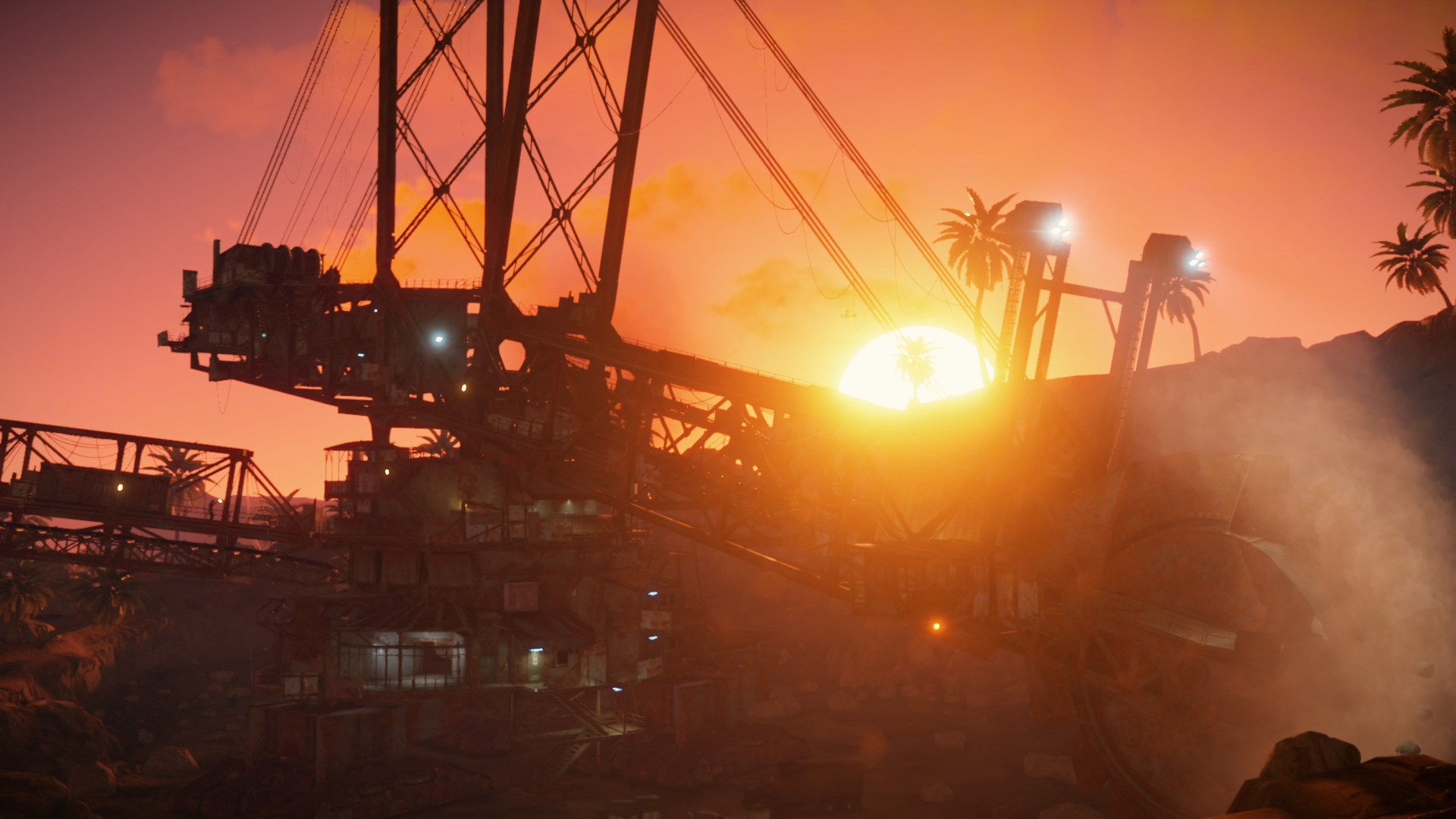 Excavator
The Excavator monument is complete and is now in-game!

This isn't just a static prop, it is a fully functioning mining excavator powered by Diesel. You can find the required fuel at the Junkyard, Oil rigs and at the top of the Dome.

You can also exchange low grade fuel for diesel, but it isn't cheap.

To use the excavator, you'll need to clear out the scientists guarding it and make your way to the engine room. Once you've added the fuel, you can power up the engine and make your way along the catwalk to the control room and select a resource type to mine. The mined resources will be deposited in equal amounts at two drop points. This means you'll need at least 4 people to operate it without a chance of someone stealing either the fuel or the output.

Also take note that RF #4777 will be activated as long as the engine is on, so watch out for counter raids.

You can find a more detailed write-up from the guys at Rustafied.com.

High Performance Maps
As most of you know we are offering both "Barren" maps and smaller procedural maps as options for players with lower end hardware. To improve the experience for those players I've removed the largest monuments from procedural maps smaller than 3500 so there is more space to roam and build. Barren maps now also spawn oil rigs, harbors and water wells for more variety and better loot options.

Additionally, we have decided to display a warning message when connecting to a server with a large map on a computer that does not fit our minimum RAM requirement of 10GB. We hope this will steer affected players towards the smaller and higher performance map options, which should provide a far better experience for them.

Lastly, I fixed a problem that could reject gun reloads when FPS dropped extremely low. This should hopefully also help out anyone playing below the minimum system requirements.

Terrain Anti Hack Protection
I've added a new anti hack feature that will detect and kill any players that somehow manage to get inside the terrain. Since there are a lot of edge cases to test, particularly on our custom maps, please let us know if you come across a false positive detection so we can fix it.

IL2CPP Testing
We are starting internal testing of Unity's IL2CPP compiler backend for the game client this month. Our goal with this is to increase performance and improve security. We will also make a public test branch available either this month or next month depending on how our tests are going. This will be announced on our Twitter account when the time comes, so keep an eye out for it.

UI Fixes
Earlier this month we released a number of UI related fixes which have been annoying us and the community for awhile - Enjoy!

Water System Server Optimization
Took some time this month to work on helping to improve server performance. We've identified some bottlenecks and this particular one was responsible for about 10% of server frame time.

Our water system is responsible for queries looking to query water height at any location on the map. These calls are used to handle any interactions with water, such as buoyancy, which may affect any object floating on water, from boats to backpacks and bottles. Potentially hundreds of water height queries can be made each frame on the server.

We delivered a huge optimization to this part of the backend, now 10-12x faster, dramatically reducing its footprint.

Terrain Shader Optimization
One of our most complex shaders is undoubtedly the terrain shader. This is valid in any quality level other than Potato. This optimization, however, will benefit high-quality levels the most and low-quality ones the least.

The shader is now doing a much better job at filtering out unnecessary work. The improvement should range from 5-10% in mid-quality levels, or higher in high-quality levels combined with anisotropic and/or parallax.

Demo Mode Fixes
We're rolling out a simple fix that might make a big difference for anyone looking to use demo mode record/play. This issue we fixed was causing some network-able objects to be duplicated, for example, doors could be visible as open and closed simultaneously.