Horse Equipment
Horses now have their max health and speed affected by their breed type. There's also a new information panel, which will allow you to equip them with various types of horse equipment.

Horse armor will grant the horse additional protection, as well as protect the rider from incoming damage. This might seem like it isn't very realistic, but it doesn't matter - it feels good in the game. Mounted riders should be something to be feared, not just sitting ducks. It is important to note that the rider protection does not stack with your existing armor, rather it reduces the incoming damage by a percentage, before it is processed by player armour.

Horse shoes will grant additional movement speed to the horse.

Saddle bags can be equipped to increase the size of the horse's inventory, but will also reduce the horse's max speed. 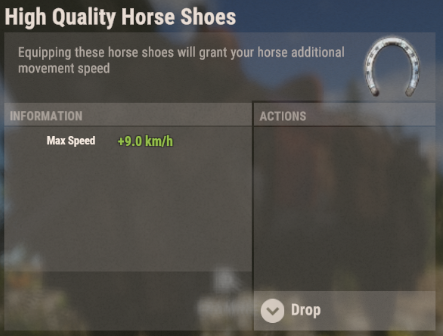 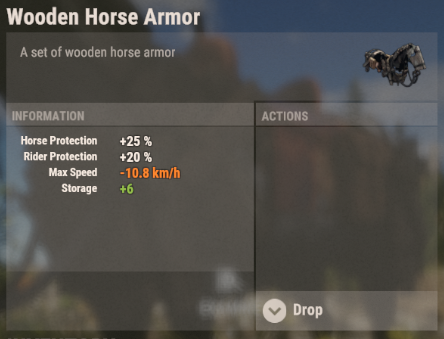 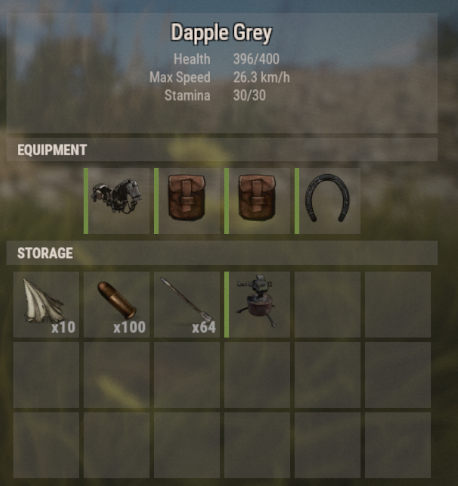 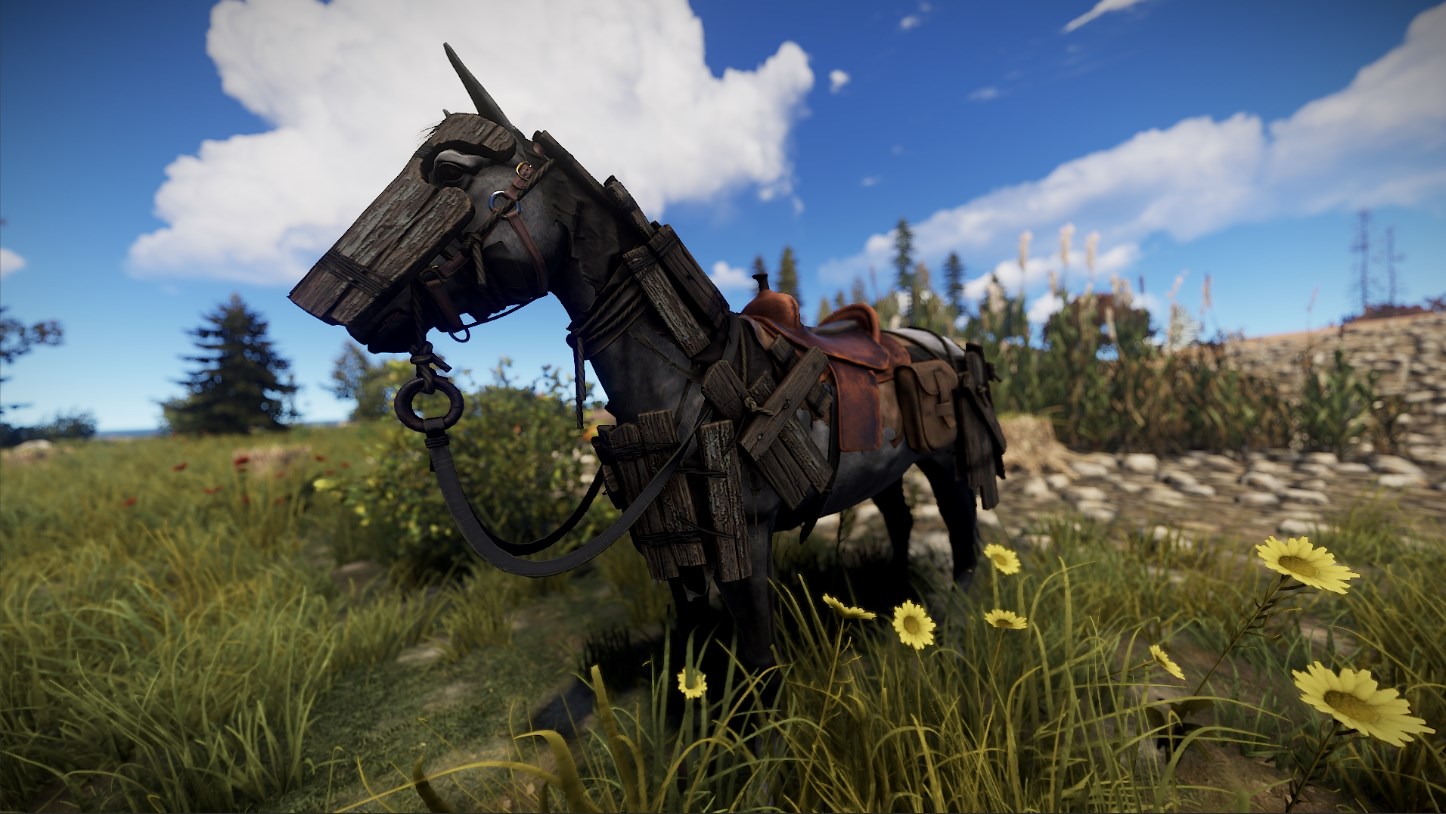 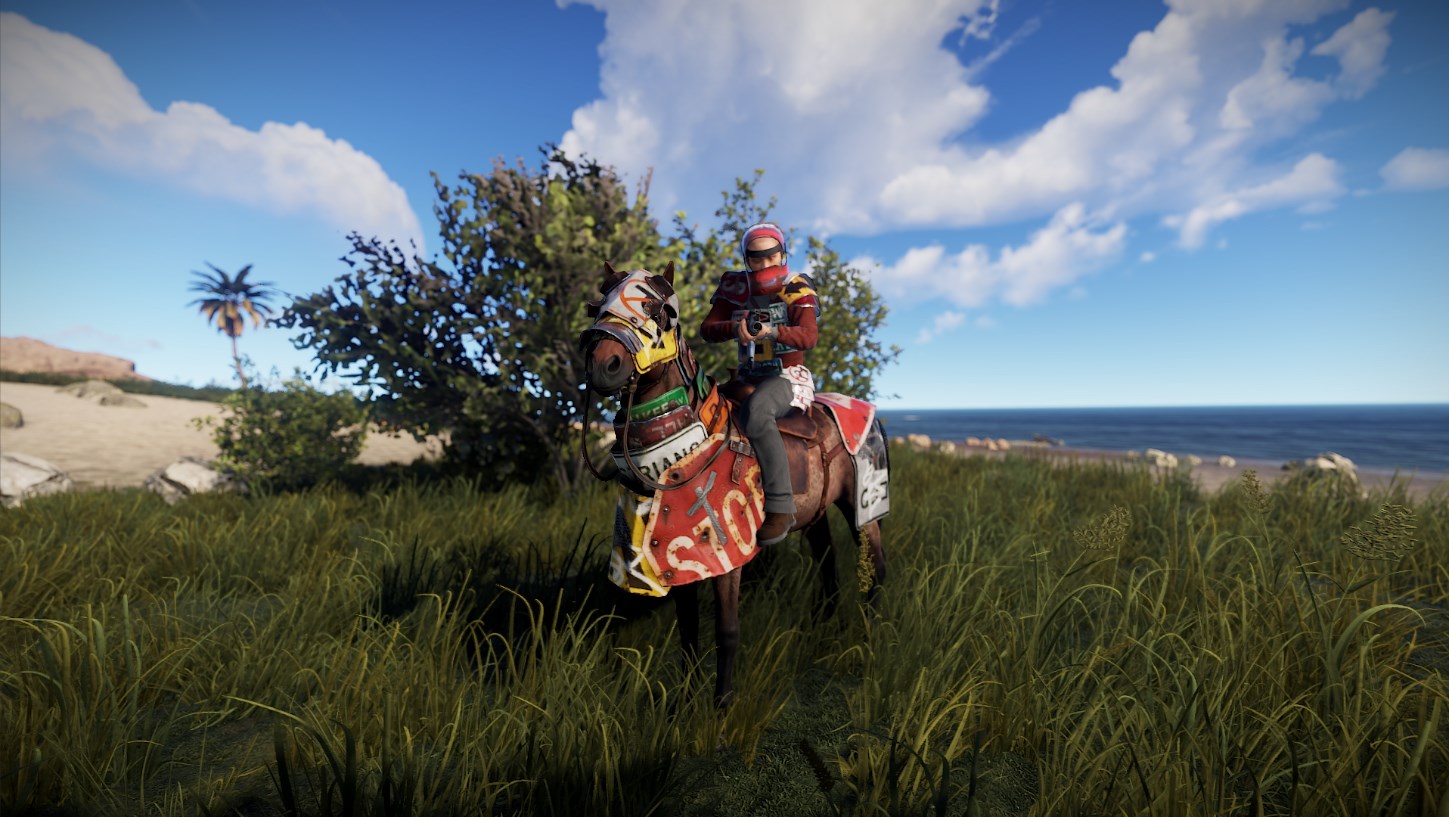 A new electrical component, the Tesla Coil is now available. Power goes in, damage comes out. If you give it at least 10 units of power, it will also severely slow players affected by the electrical arcing.

I have no idea what people will end up using these for, but I have a feeling Oblivion has a few ideas...

Electrical Wire Changes
I've added a flow indicator to the electrical wires, which will be visible as long as you have Building Privilege and a wire tool equipped. This should help people remember what exactly they were doing when building massive circuits.

I've also added a normal map and specular highlighting to the wires instead of drawing them as just black. This should give them a more 3d look. 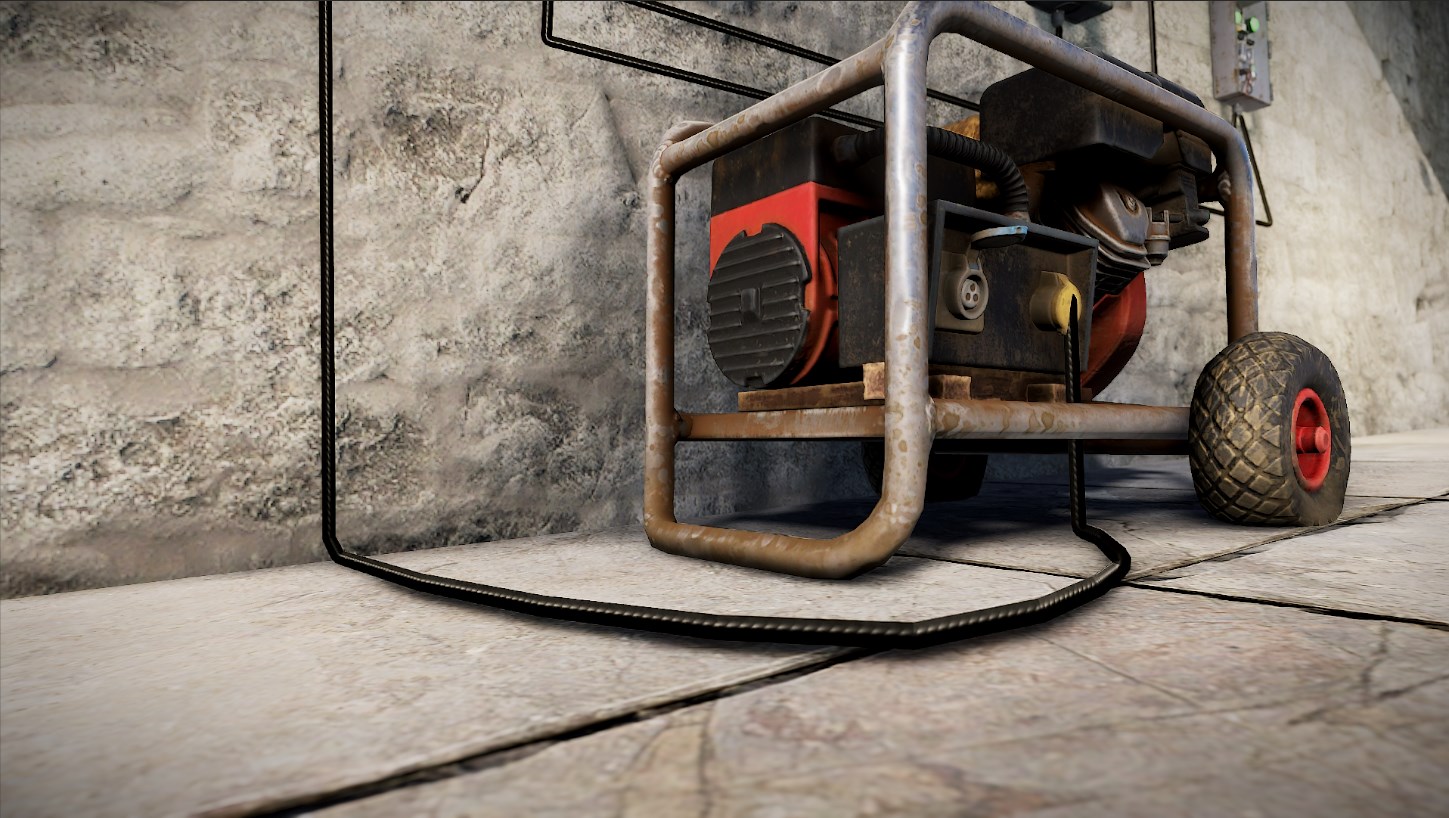 Weapon Balance
I've made some changes to the way weapons work and their availability, Check them out:

Ammo Information
Selecting ammunition will now actually tell you some basic information about it. We haven't changed any stats (yet), we're just exposing them.

Exploit Fixes
A number of client and server side exploits have been fixed:

We liked headlerp_inertia so much that it is now enabled by default for everybody. I also added a grass.distance convar that can be used to increase the distance grass and small decor clutter is rendered at. You cannot go below the default value and we do not recommend increasing the distance in normal gameplay as it will just give you a disadvantage. For video creation however it can make things look more appealing.

Impact Effects on Vehicles
Ever since the cargo ship was added we have had a problem with the bullet impact glow on vehicle metal parts not following the vehicle motion on all vehicles other than the cargo ship. This took a bit to untangle since I initially suspected it to be a problem in the decal system, but it is now finally fixed.

Code Reviews
September has been the first month with our new code review policy in place. Since the team now includes a significant number of new programmers, it was a good time to get more organized about the way we work. You can argue we are pretty late to the party, but our low-overhead way of doing things has allowed us to be extremely agile and quick to react over the past years. Times have changed though, and Rust is now all grown up and at a place where we need to think longer term and calm down our process a little in order to avoid frustrating and expensive mistakes. The time spent on the review process should easily be compensated by the larger team, so we do not expect content to slow down but merely get more robust and better tested. 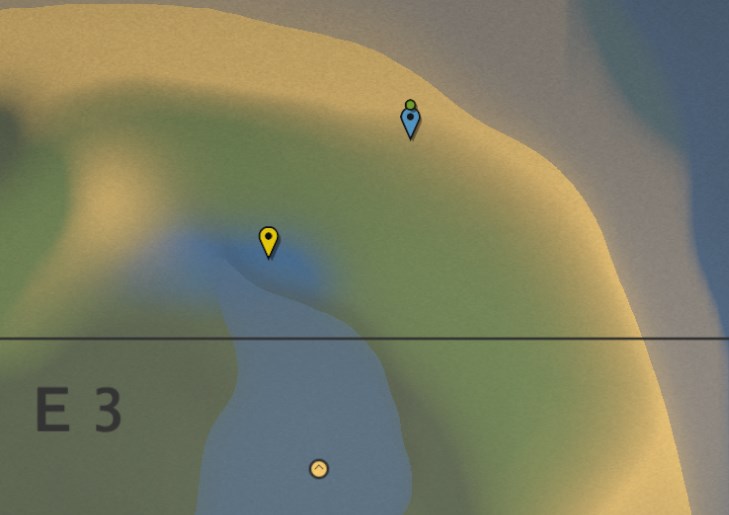 As well as placing a marker, you can also now see the last place you died on the map. Handy if you want to head back to get your stuff! This death marker will persist until the next time you die. One important thing to note: this marker stores the place you died, not the location of your corpse. This means that if you die on a hill and your corpse rolls away, the death marker won't lead you to your corpse.

New Death Screen
While implementing the Map Markers this month we decided to look at adding a map to the death screen to make selecting a Sleeping Bag more intuitive. This eventually ballooned out to a whole new Death Screen redesign which is rolling out this month. Special thanks to Lewis for the great concepts and designs that went into this.

As well as being able to see and select your sleeping bags on the map, the new Death Screen shows the distance you were killed at, the location you died and the current locations of your team-mates. Sleeping bags can be selected via the window at the bottom of the screen or by clicking them on the map. 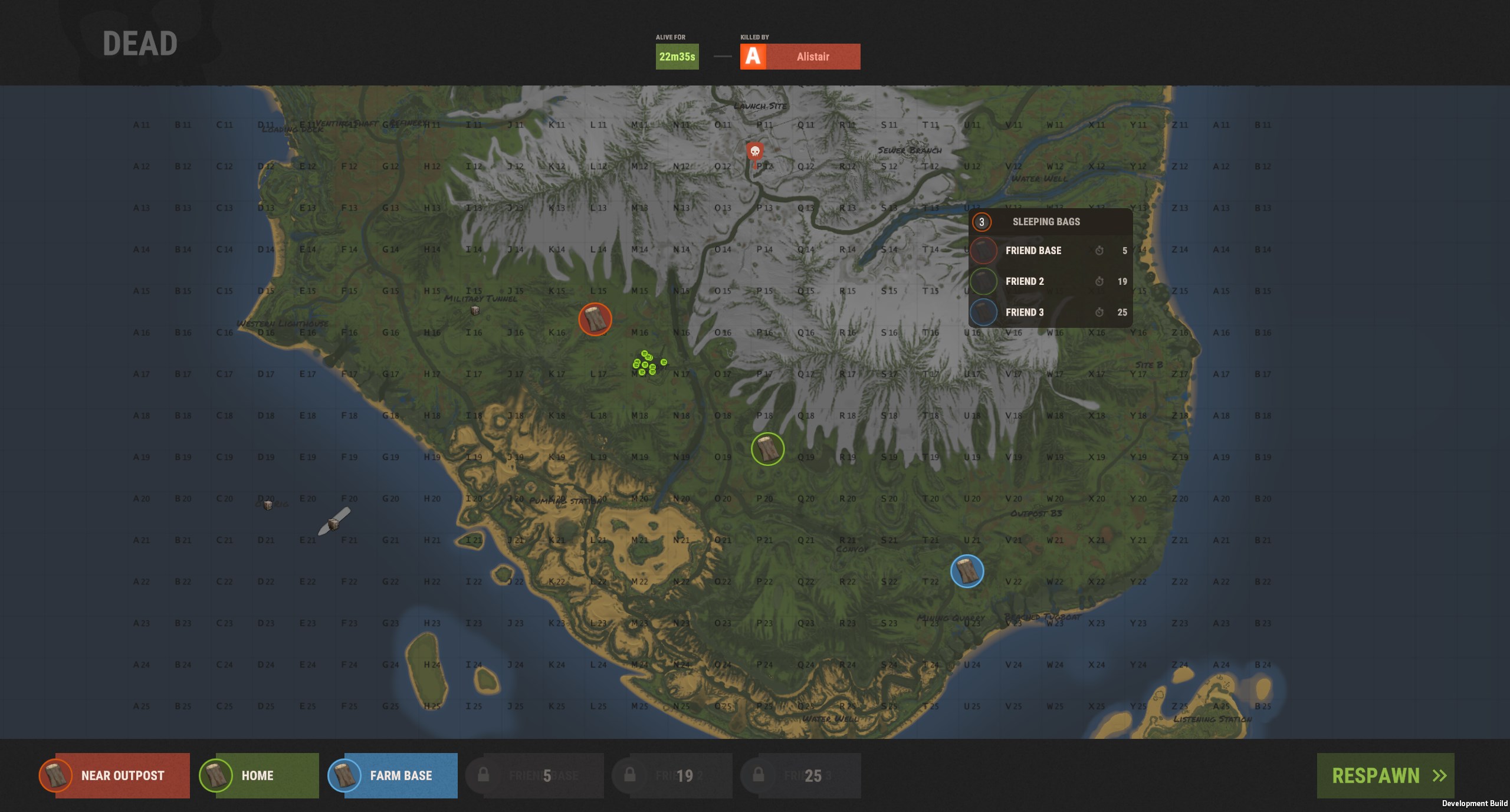 Groups of sleeping bags in close proximity are merged into a new sleeping bag cluster UI widget that lets you easily select a sleeping bag from a group.

Weapon names are now using localized strings rather than the old prefab names, so weapons should appear in your selected language.

There's also better support for death via non-combat, with special UI states for deaths by Drowning, Radiation, Hunger and some other edge cases.

One note for streamers: while streamer mode is enabled the map on the respawn screen will be disabled by default, you can show it by holding the Map key. If you have an overlay setup to appear when you hold the Map key, that should still work here in order to hide any private information from your viewers.

Screen Settings
I returned to this again, adding a couple of new options that I mentioned last month: If something doesn't seem to be working quite right, remember to make sure you've hit the APPLY CHANGES button, and then also check if you need to remove any graphical workaround command line options that you may have added in the past.

Inventory Character
You can now left click and drag/swipe on your inventory screen player model to spin it around. Perfect for admiring your hard-earned gear.

It'll reset to the default view whenever you re-open your inventory screen, or you can right click to manually re-center it immediately, if you really want to.

Additionally, you can now disable the inventory screen player model altogether in the interface options, if you'd prefer a few more FPS in the inventory (the protection info overlays will still work).

Hovering a craftable item (in the quick craft or main crafting screens) will now show a toggleable "favourite" star icon in the top right corner. Click this to add or remove an item from your favourites list. There's also a button on the item information panel you can use to toggle the favourite status of the currently selected item. 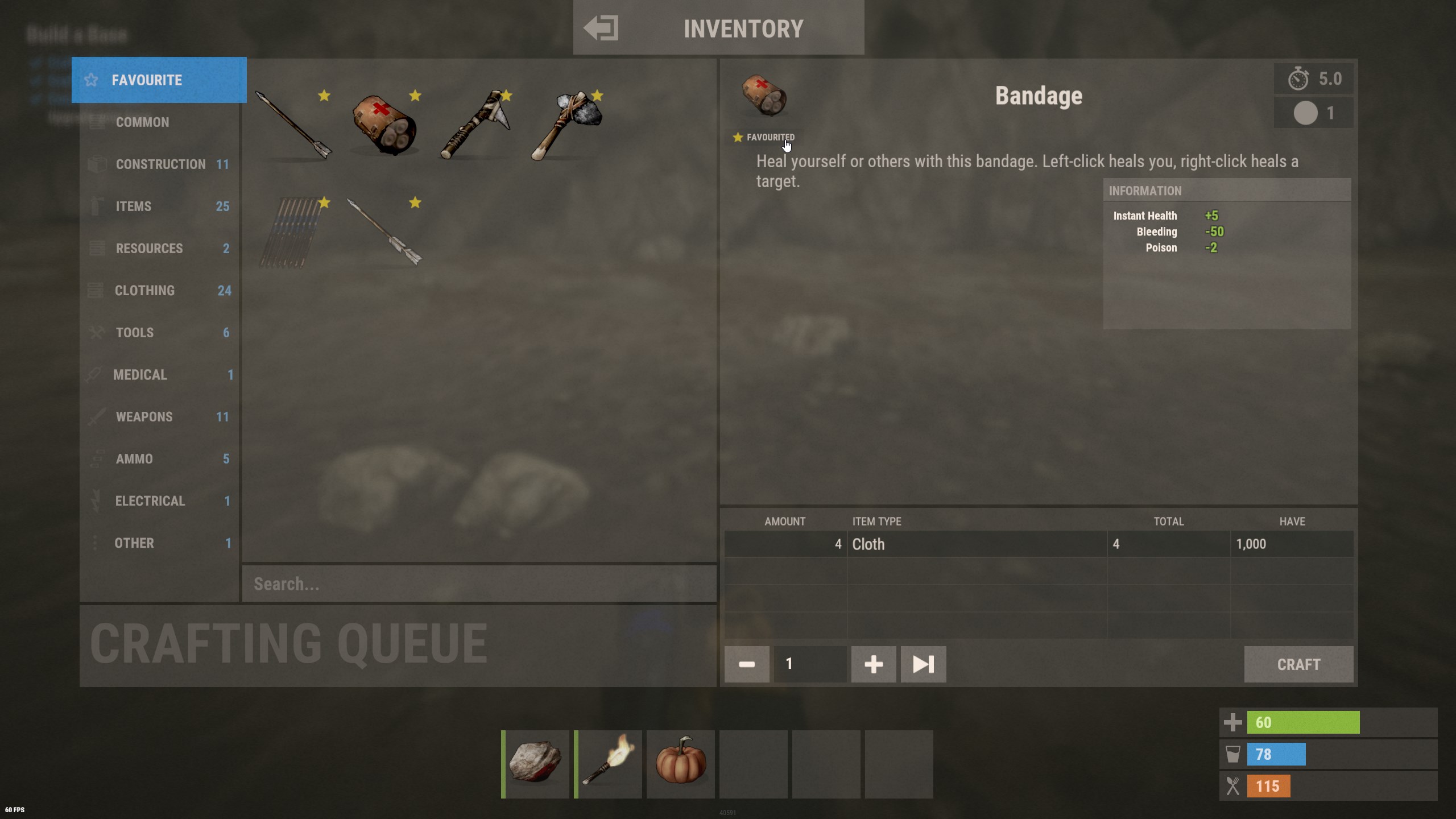 To quickly view and edit all of your favourite items, there's a new "Favourite" crafting category which lists them all in one place.

Crafting Quality of Life
Continuing with the crafting theme, I've made some additional crafting QOL improvements:

Repair Quality of Life
It wasn't always clear why something couldn't be repaired, especially when it had recently been damaged. To help clear this up I've added chat notifications stating the reason you're unable to repair:

There are no default keybinds for these, because we didn't want people not realising and accidentally dropping stuff.

If you want to make use of them, I've added new keybindings to the Inventory section of the Controls screen: Oilrig Balance
We've felt that the Oilrigs have been offering too much loot, too easily, for awhile now. So, to that end I've made the following changes:

Expect more indirect nerfs in the future, with AI improvements.

Sound Updates
I've been going through some of our older sounds and bringing them up to snuff this month. Here's the main changes:

Helicopter Exploits Fixed
Looks like people figured out two exploits with the scrap transport helicopter and the oil rigs. One involving parking the helicopter at a certain angle, so that its underbelly kill trigger would hurt all the landing scientists, and another involving a kamikaze, to burn them. Both have since been fixed.

Bradley Changes and Fixes
There was a bit of a math error in the Bradley code which would sometimes result in its crates spawning under the terrain and disappearing forever. This has since been fixed. I've also modified the bradley crate loot table, and you should now find it much more appealing. I've also made the Bradley APC more vulnerable to HV rockets, and enabled its secondary top turret, so that it can engage two targets at once. Good luck!