This update brings Night Vision Goggles, Electric Heaters, Farming 2.0 additions and balances as well as other improvements and fixes.

NVG
Night vision goggles have been added to the game! They do have a tradeoff, however. You can't wear a helmet, and the lenses are visible to other players, You can also be blinded pretty easily by bright lights such as Flashlights or spotlights, They also need to have their batteries changed every 15 minutes, this can be accomplished at a tier2 workbench 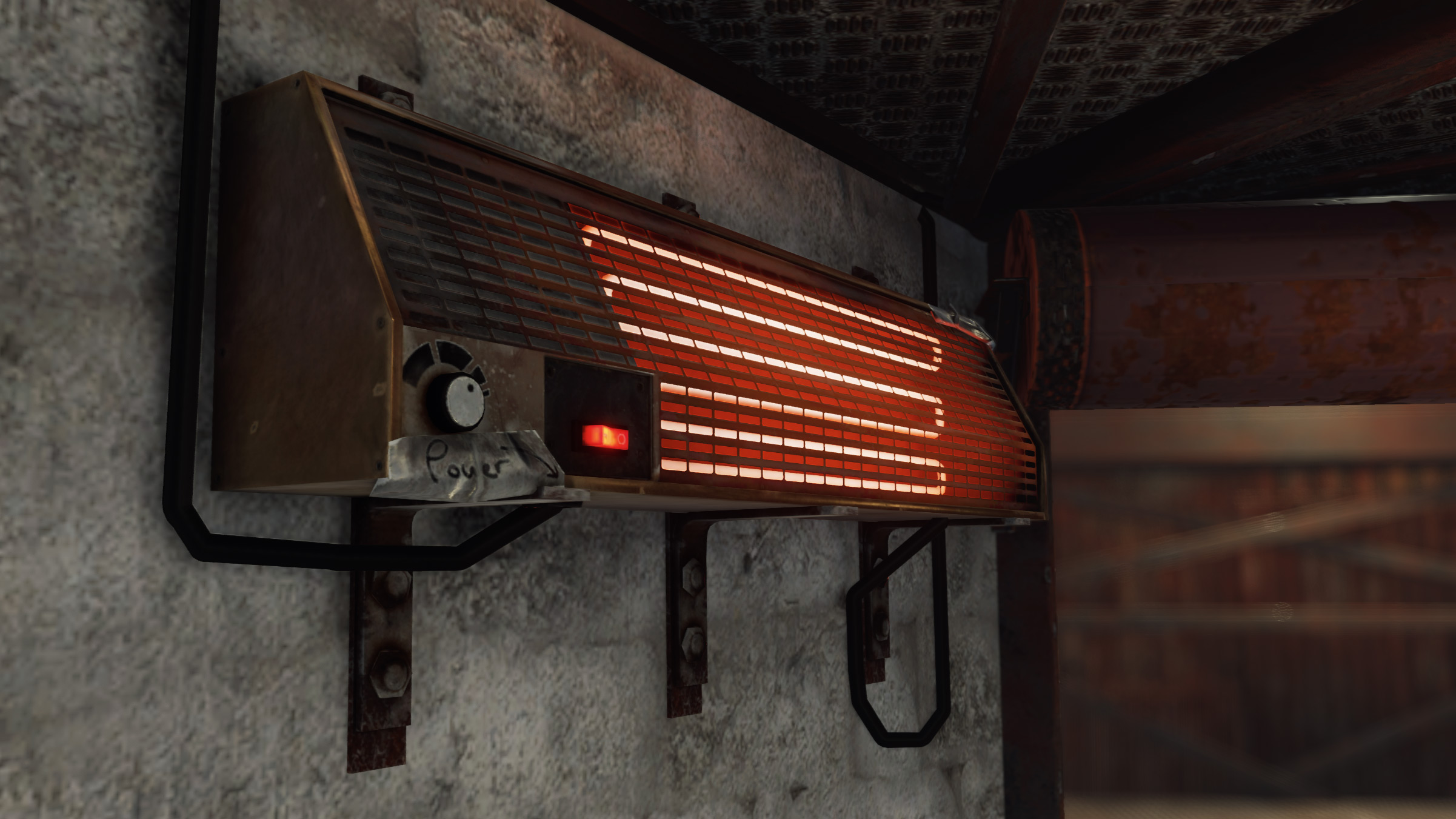 You can now deploy electric heating elements in your base They require 3 power each to run and provide heat in a 10m radius! No more freezing to death indoors if you choose to build in the arctic biome!

Monument Changes
If you've been around long enough, you'll remember The Puzzle Update, and then, later on, we added The Air Power Update. If so you'll know puzzles were initially added to link monuments together into a coherent progression path, with increasing rewards and difficulty as you progress, but this was lost when helicopters were added. Players would easily skip the majority of puzzles with ease and skipping the keycard requirements.

To that end, I have sealed up all the monument skips, and you'll no longer be able to skip puzzles by flying and will have to progress through the monuments puzzles as originally intended. 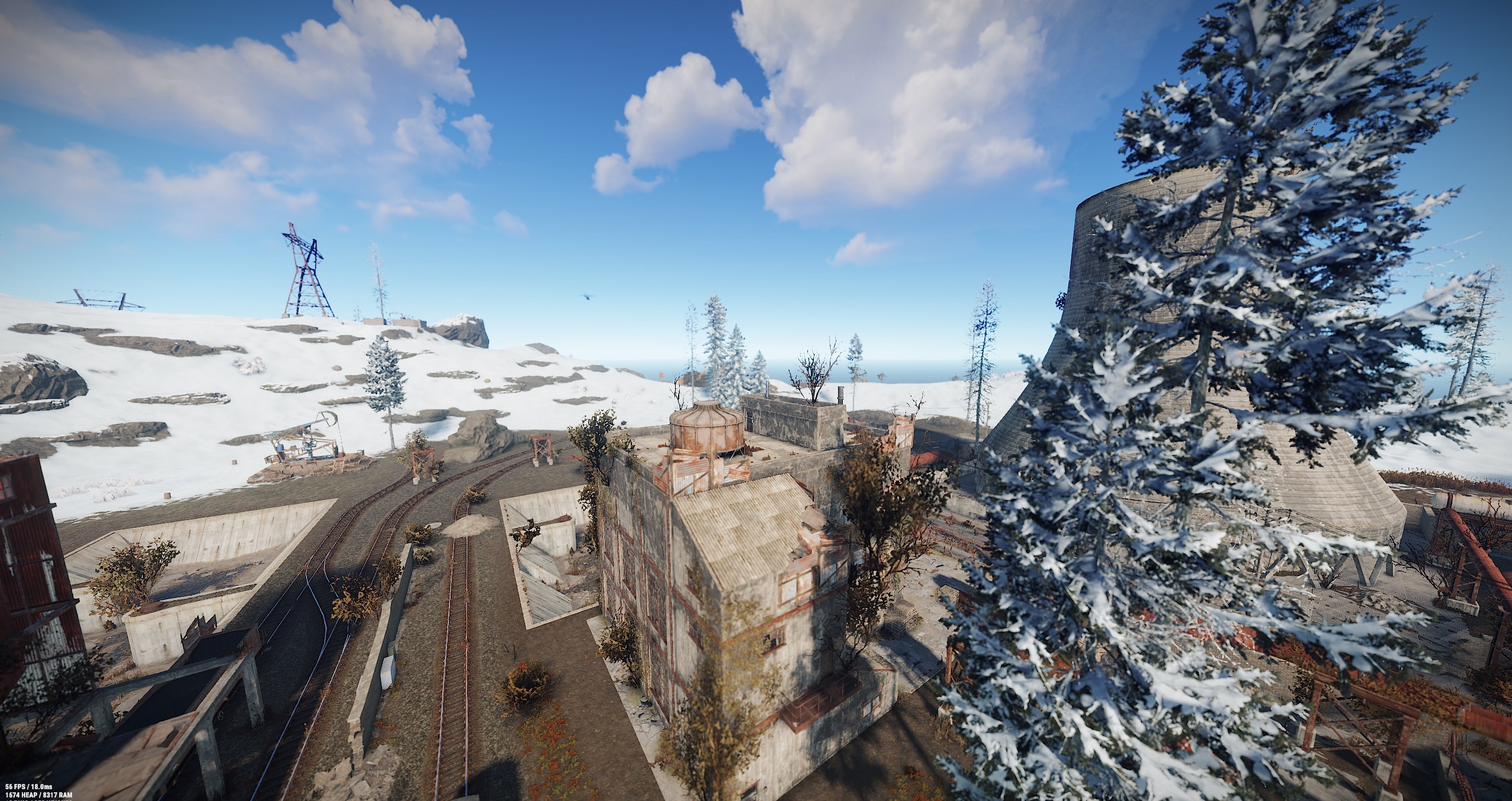 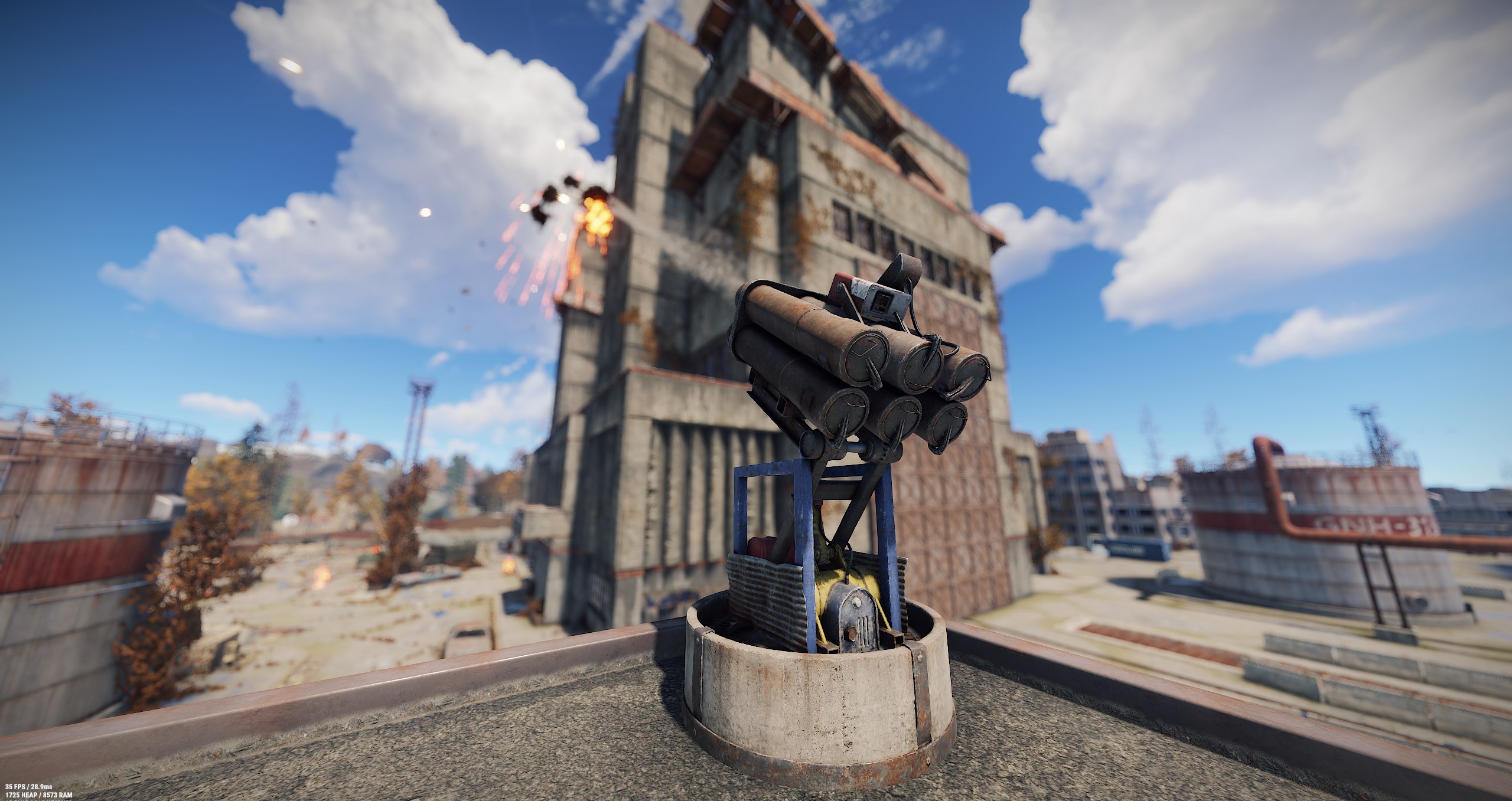 Not all monuments can be sealed up as easily as others without a larger overhaul so you'll now find extra SAM sites at the Launch site and Oilrigs hackable crates behind red keycards.

Harbour Loot
A long-requested and highly voted change by the community on nolt.io was to buff the Harbour loot, so I went ahead and did just that. You'll now find triple the amount of barrel spawns and I've added oil barrels. 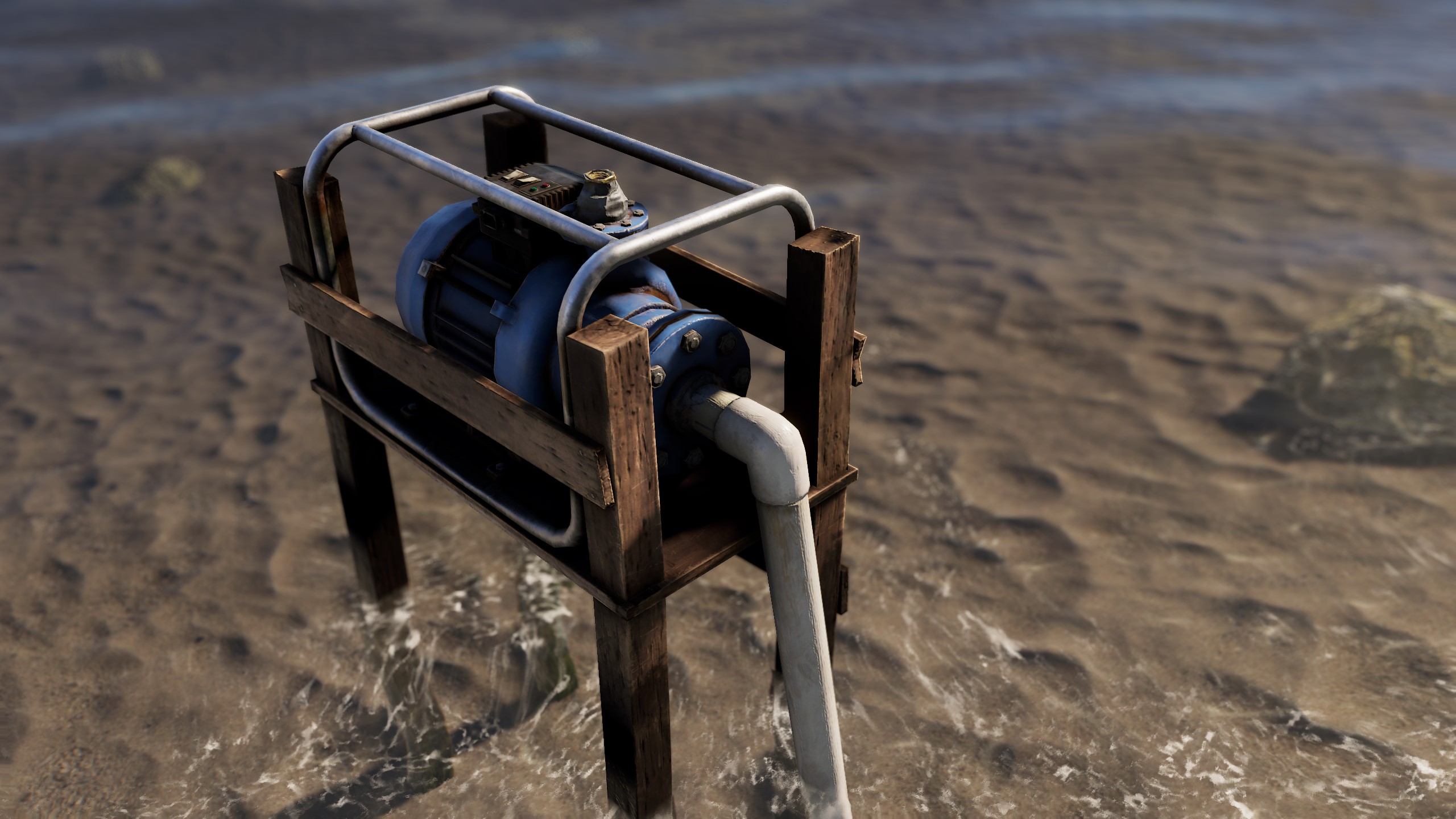 The Water Pump is a new deployable that can be placed in a water source to automatically collect water. It requires 5 power and will collect 150ml of water per minute. The water it collects will match the water that it's placed in, so placing it in the ocean will produce salt water and placing it in rivers, lakes and swamps will produce fresh water. While powered it's also able to pump water upwards, so no Fluid Switch is required. 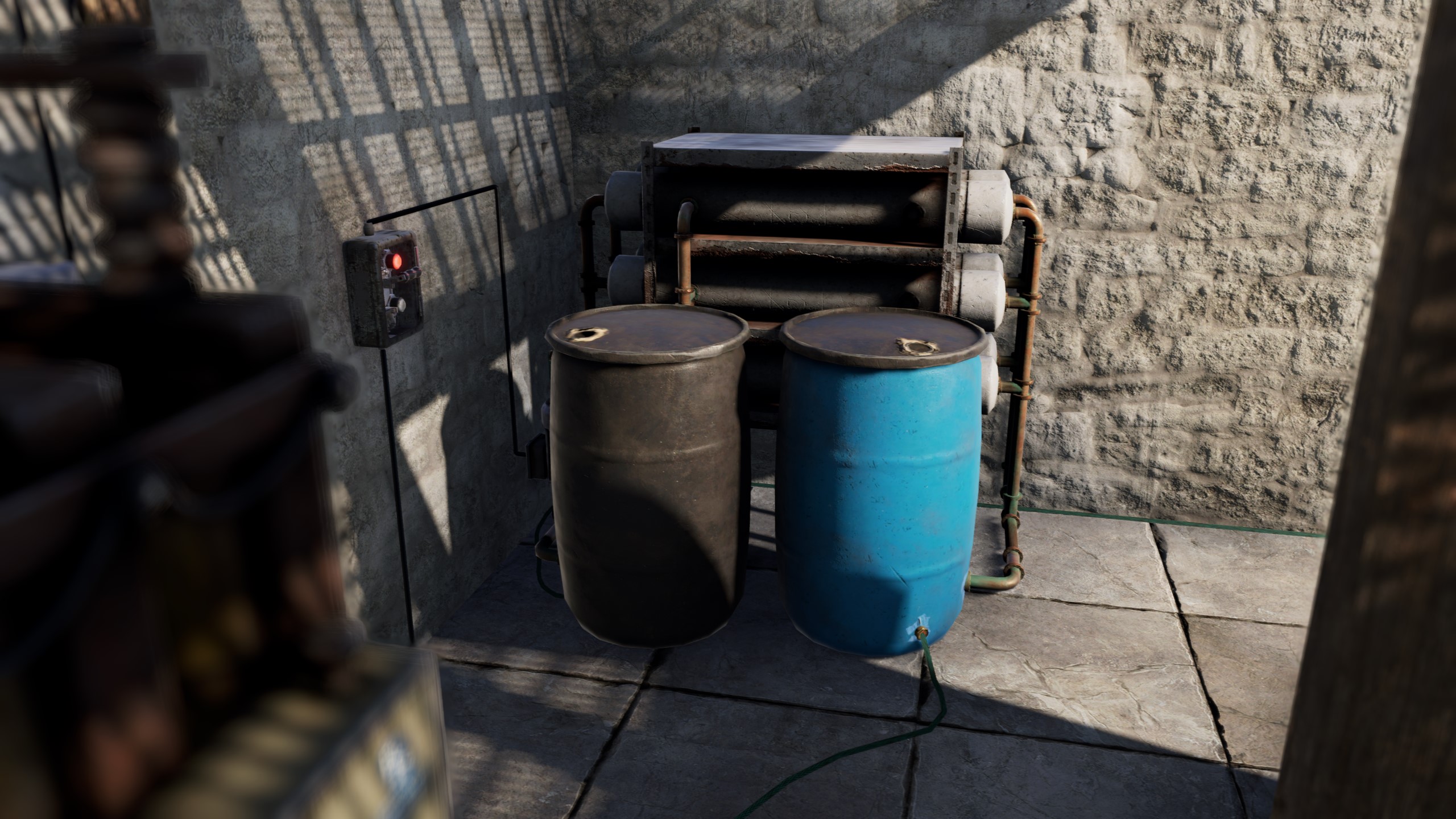 To complement the new Water Pump, the Powered Water Purifier is a new deployable that can convert salt water to fresh water much more efficiently than the campfire purifier. This new purifier will convert 4x as much water per minute and only lose half of the water in the process. It also has input/output ports so it can receive water from a nearby Water Pump and then push water into a Barrel for use by your sprinklers. To round out the new Fluid entities this month, the new Fluid Combiner will allow you to combine multiple fluid sources into one output. This should be pretty self explanatory and has the same crafting costs as the Fluid Splitter.

Vehicle Bug Fixes
Invisible Collider at Launch Site
The large ditch at Launch Site is below ground level, with an invisible trigger creating a hole in the terrain's collider. Unfortunately vehicles with wheels (minicopter, scrap heli) weren't getting the memo and were landing on invisible ground. I've heard that players were sometimes getting the same issue just walking, which I suspect was caused by the trigger being right at ground level. I've sorted this out and you should now be able to fly into the Launch Site ditch safely.

Swimming While Mounted
Another relatively rare issue was that players would show their swimming animation if they mounted a vehicle that was submerged in water. They should now sit down nicely instead of flailing about.

Farming 2.0 Tweaks
Now that Farming 2.0 has been out for a month, I've made some balance changes based on feedback and further play-testing. These changes, along with the new water items above, should lead to farming being more manageable and lucrative.

Planter Boxes
The amount of water required to achieve "optimal" water saturation in planter boxes has been reduced, making it easier to keep your plants happy.

Additionally, the minimum temperature in a planter box has been increased to help boost the viability of farming in colder locations.

Plant Genetic Buffs
Hardiness genes now contribute towards plant temperature happiness, and the Growth and Yield genes have had their effects boosted.

Exploit Fixes
I've fixed 14 exploits this month as part of our ongoing effort to combat cheating. As usual, we're keeping the specifics private.

Faster Server Entity Hiding
In Rust, all weapons in your inventory are child entities of your player. We sync all of those entities to your local client, so switching weapons doesn't have any delay. However, as an optimization, we only network the visible weapons to other clients. This is done by disabling the entity on the server, which disables networking. The same thing happens for all weapons that are in boxes.

A side effect of this entity hiding mechanism has been that all those entities were considered to be at "world origin" when they are disabled. This could cause significant strain on the server when working with network group subscriptions. To combat this we now move those entities to their own network group instead of reusing the network group at world origin, which completely excludes them from all processing.

Faster Server File Storage
The server file storage database is now cleared with every wiping update and we create an index for faster random access by entity ID. Both measures improve server performance.

Roadside Monument Fixes
There's been an edge case that could cause roadside monuments to spawn upside down. We were finally able to track this down and get it fixed.

Default Safe Strings
On top of the usual exploit fixes, I've changed the default string behavior to only allow safe strings without control characters in network messages. This has been a repeating vulnerability in various locations around the codebase, and instead of fixing the individual cases we were now able to make the safe option the default. This naturally required a lot of testing, but it appears to be working as expected. 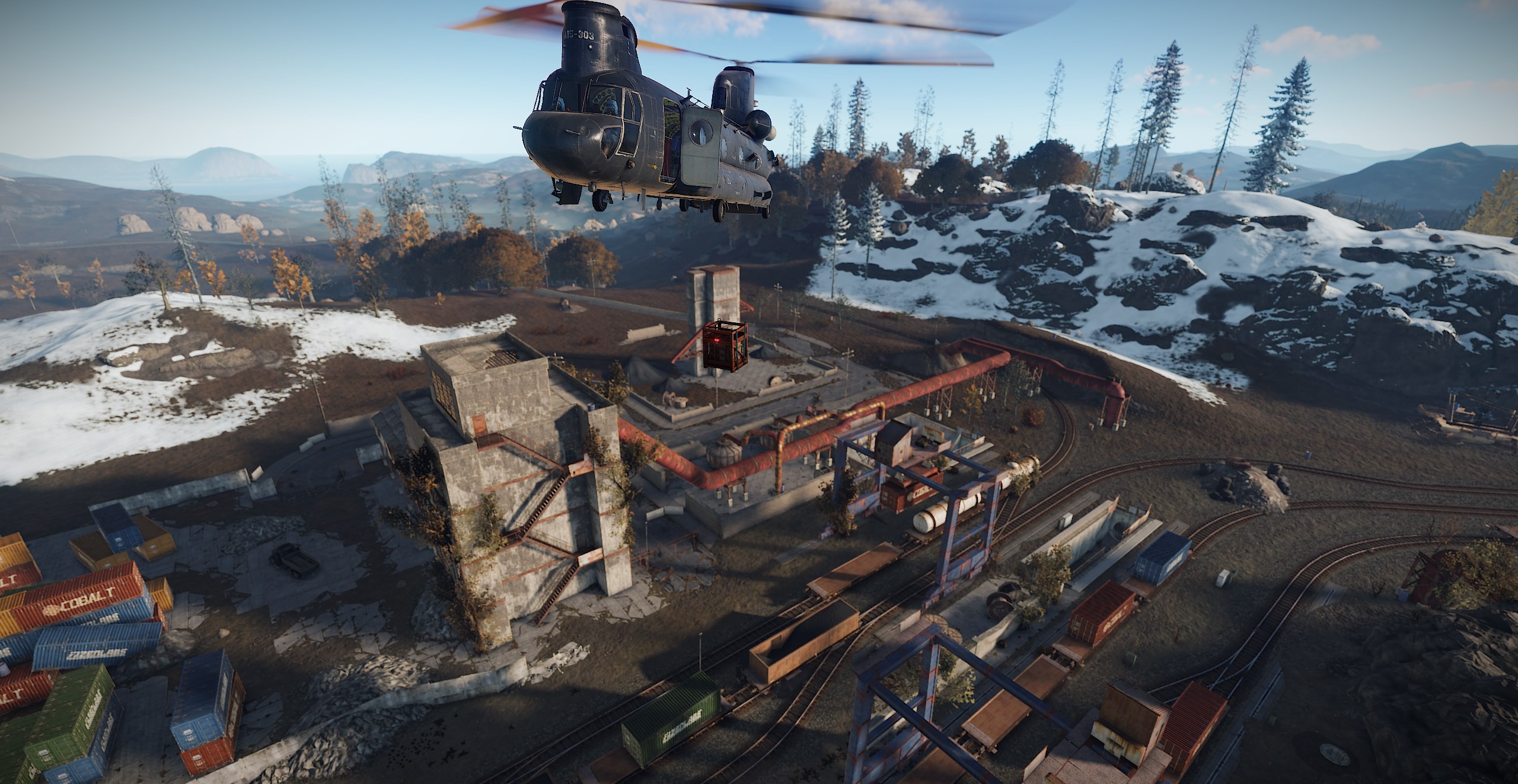 New Overlays
We've updated the screen overlays for the scuba mask and scopes with new ones containing additional detail like knicks, dirt and scratches. 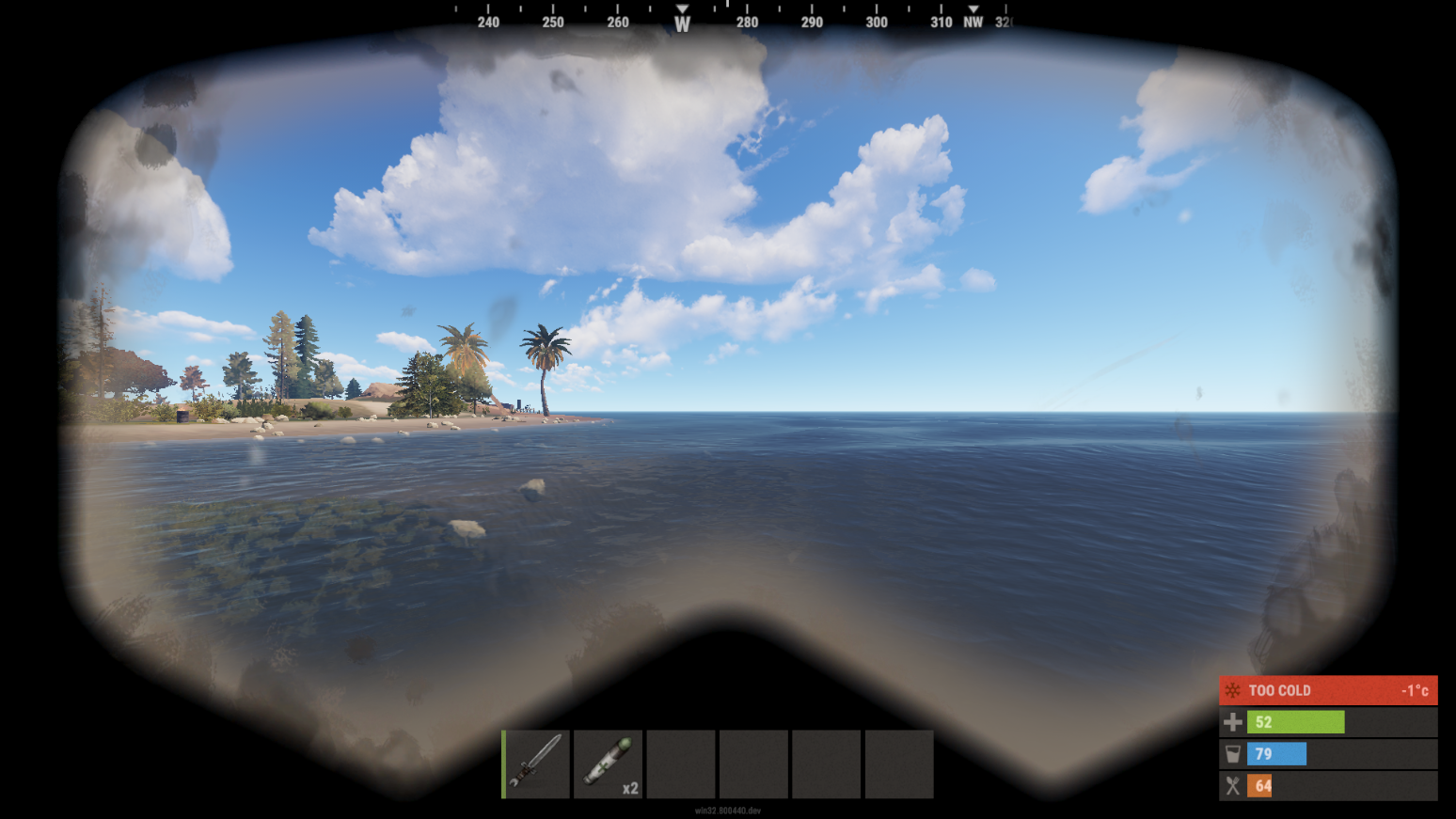 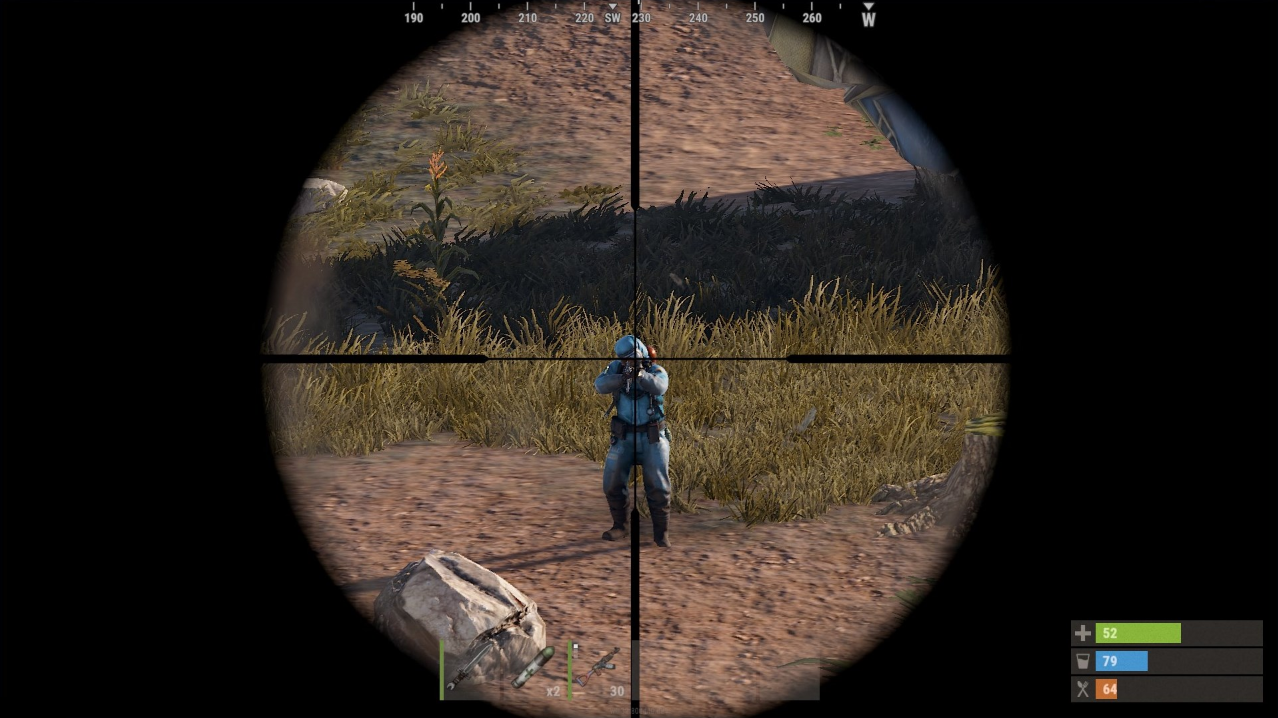 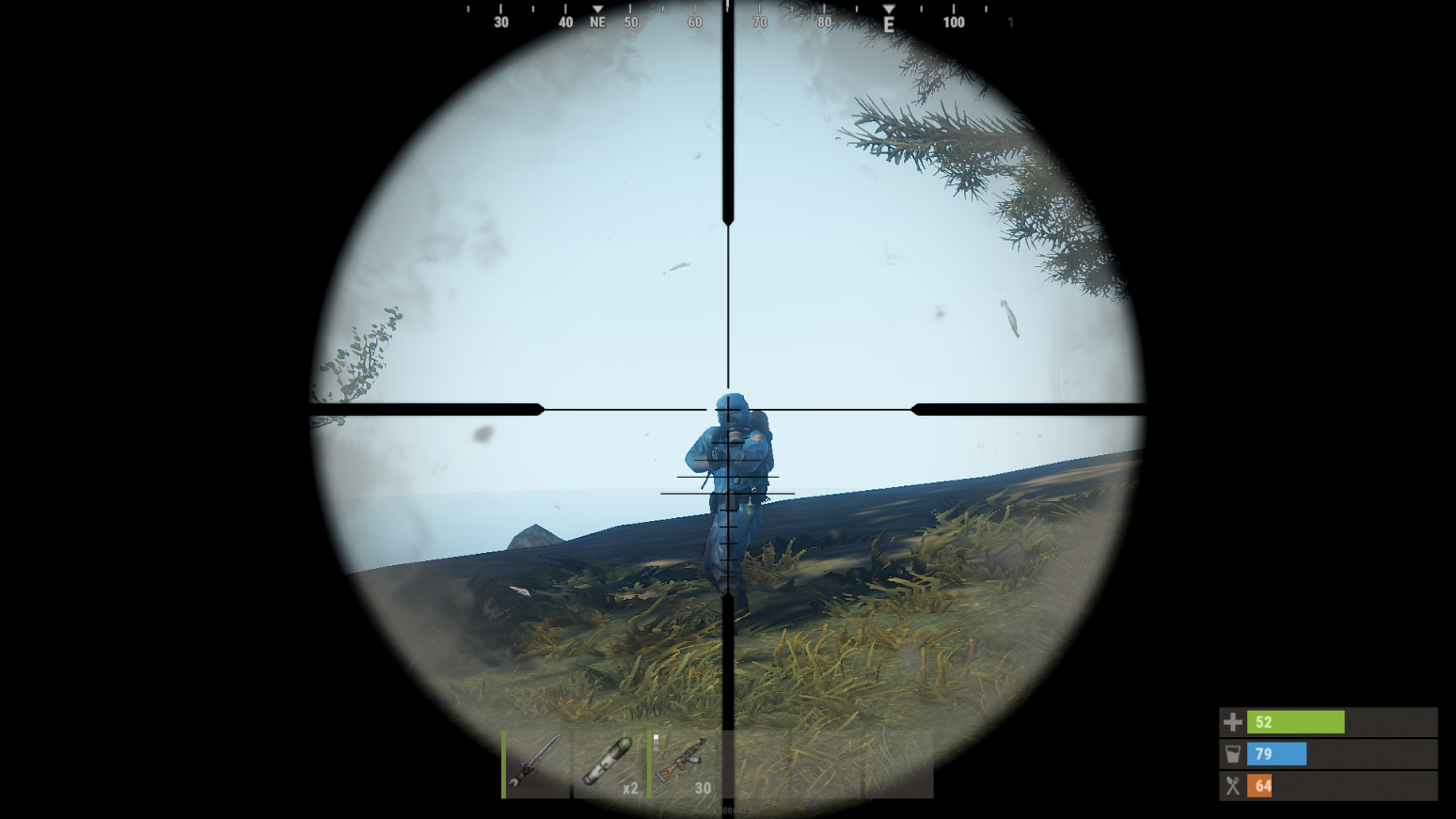 We've added a new recorder UI for easier demo captures. Use the command demo.recorder to toggle the recorder UI - best used when bound to a key.

With the UI displayed, start typing a demo name then click the 'Record' button using your mouse or press the ENTER key to start the demo recording. Use demo.recorder again to return focus to the UI whilst recording.

If necessary, you can also hide the recorder UI by using the demo.togglehud command.

Camera Saves
debugcamera_savetofile - Saves the current camera position/state to a .cam file in a folder called "camsaves" in the root game directory.

These saves can be loaded using the existing debugcamera_load command and debugcamera_list will also show these saves under a new section labelled "Files".

Camera Parent Bind
The debug camera parent feature which we introduced in the March patch has been slightly updated. Instead of using the previous F key, you can now bind a unique key to debugcamera_targetbind to toggle camera parenting.