Rust+, smart devices, and a ton of new building blocks!

Rust+, the official companion app for Rust, is out now! Stay connected to the game so you never miss an important moment again. Coordinate with your team, receive alerts when you’re being raided, remotely set off traps, and more!

Pair with your Servers 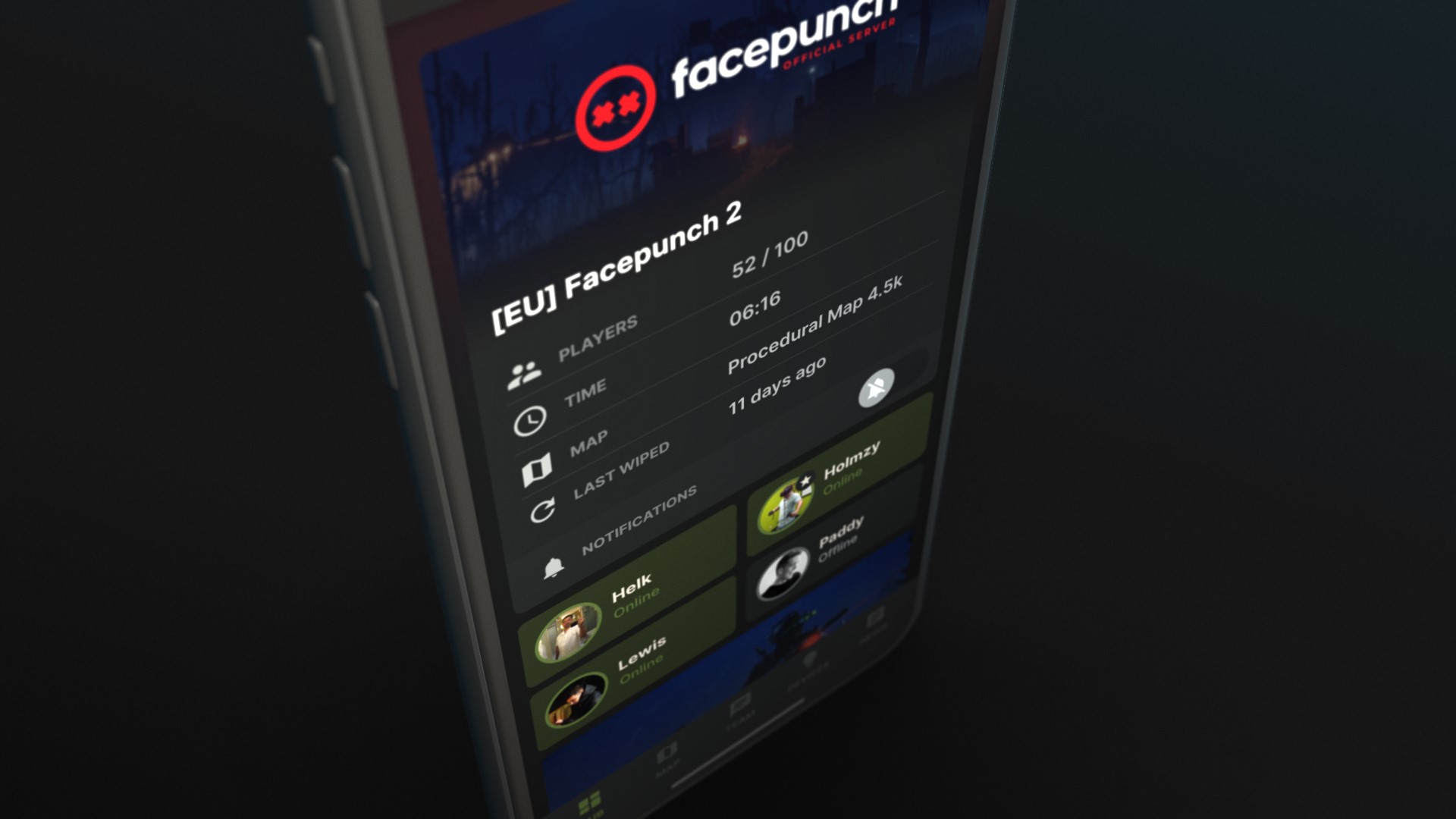 Pair with your favorite Rust servers to receive real-time updates for the things that matter the most: player counts, current game time, online teammates, and more. You’ll also get (optional) push notifications whenever one of your teammates joins the game. 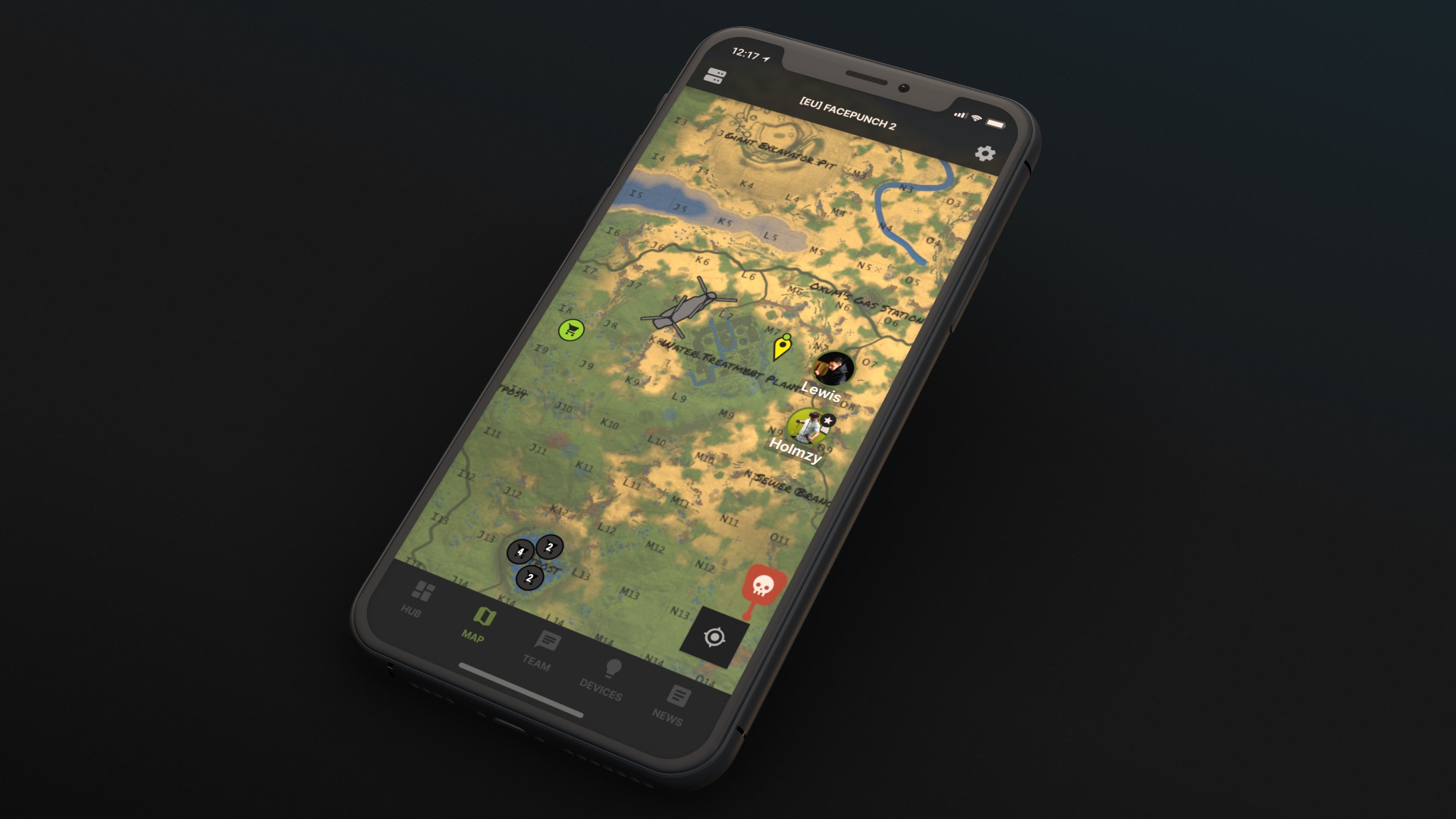 View the full server map to find points of interest, see where your teammates are and check on vending machines. You can also track ongoing events like the attack helicopter and cargo ship.

Keep up with your Team 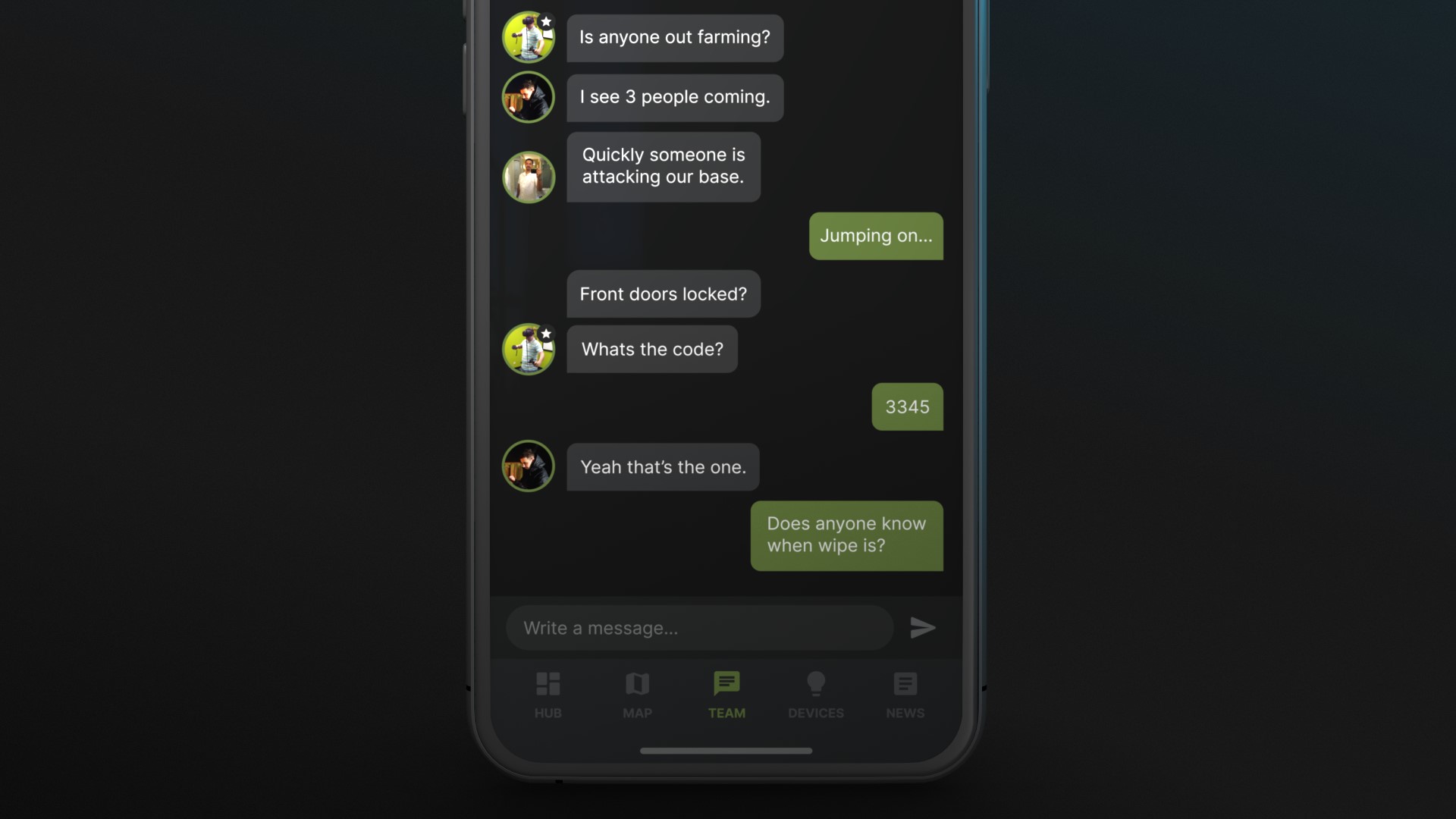 Communicate with your team from anywhere to just catch up or plan for your next raid. Messages are visible in both the app and the in-game team chat so you can seamlessly switch between the two. The Smart Switch is an improved electrical switch that can be turned on or off from Rust+ (or manually). You can pair it with Rust+ by holding down the Use key (E) and selecting the pair option.

In addition to being remotely controllable, the Smart Switch also requires building privilege to manually turn on or off, making it a secure and convenient addition to your base. 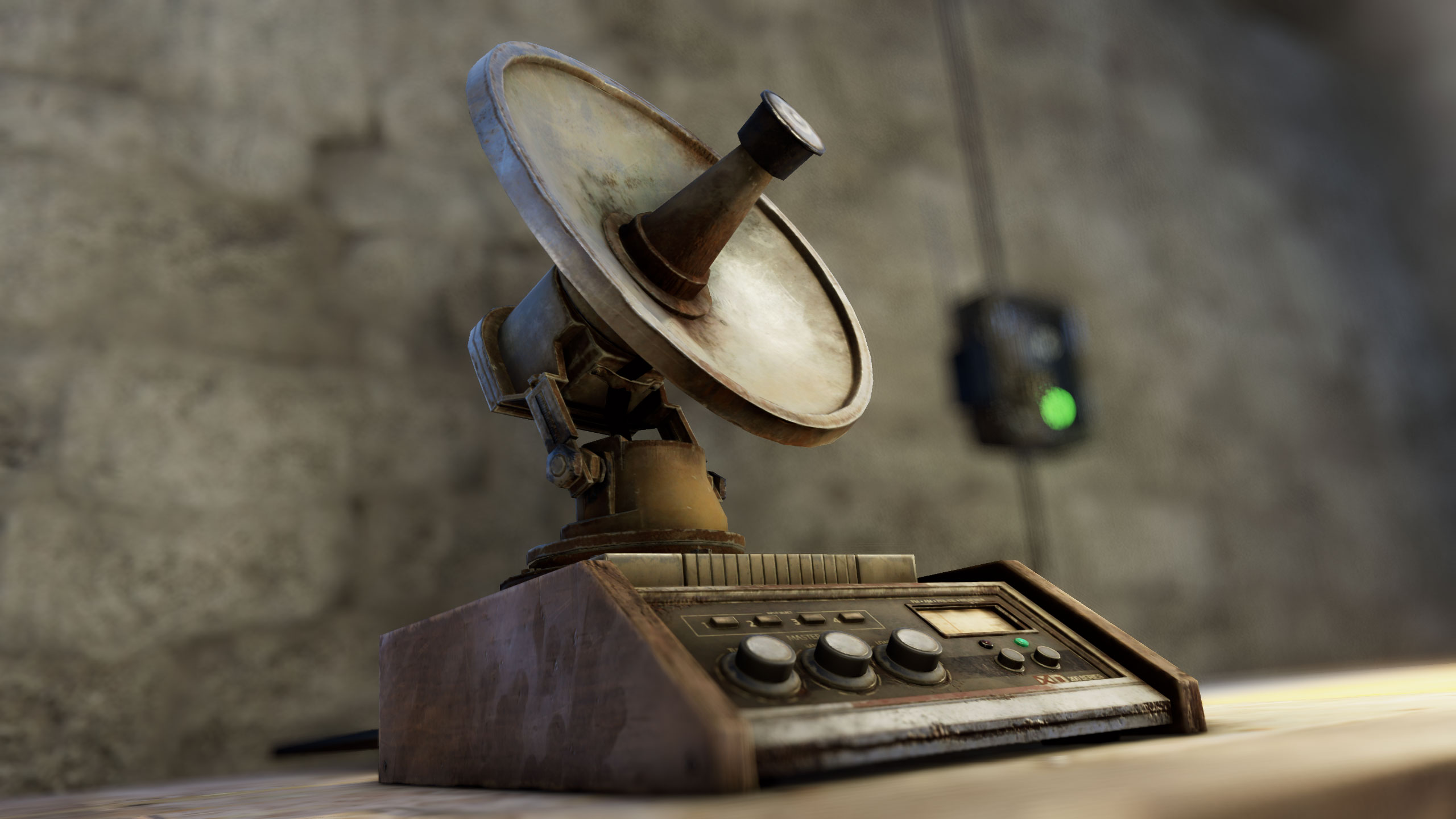 The Smart Alarm is another device which can be paired with Rust+. Everyone who has paired with it will receive a push notification when it is turned on, as long as they still have building privilege. The notification message is also fully customizable so you can adapt it to any use case. Rust+ provides additional push notifications aside from the ones sent by Smart Alarms. You'll be notified whenever one of your teammates joins the game, whenever you're offline and get killed, and for Rust news (including blog posts like this one).

Is the app not working? Found a bug? Have a suggestion? You can submit feedback directly to us using this special form. Please include as much information as possible or it will take longer for us to figure out! Device models and Android/iOS versions are always useful, and describe what went wrong if it's a crash or bug.

We put up a wiki page describing what needs to be done to get Rust+ working with your server. It probably needs some work on your end to open up a port so do check it out! 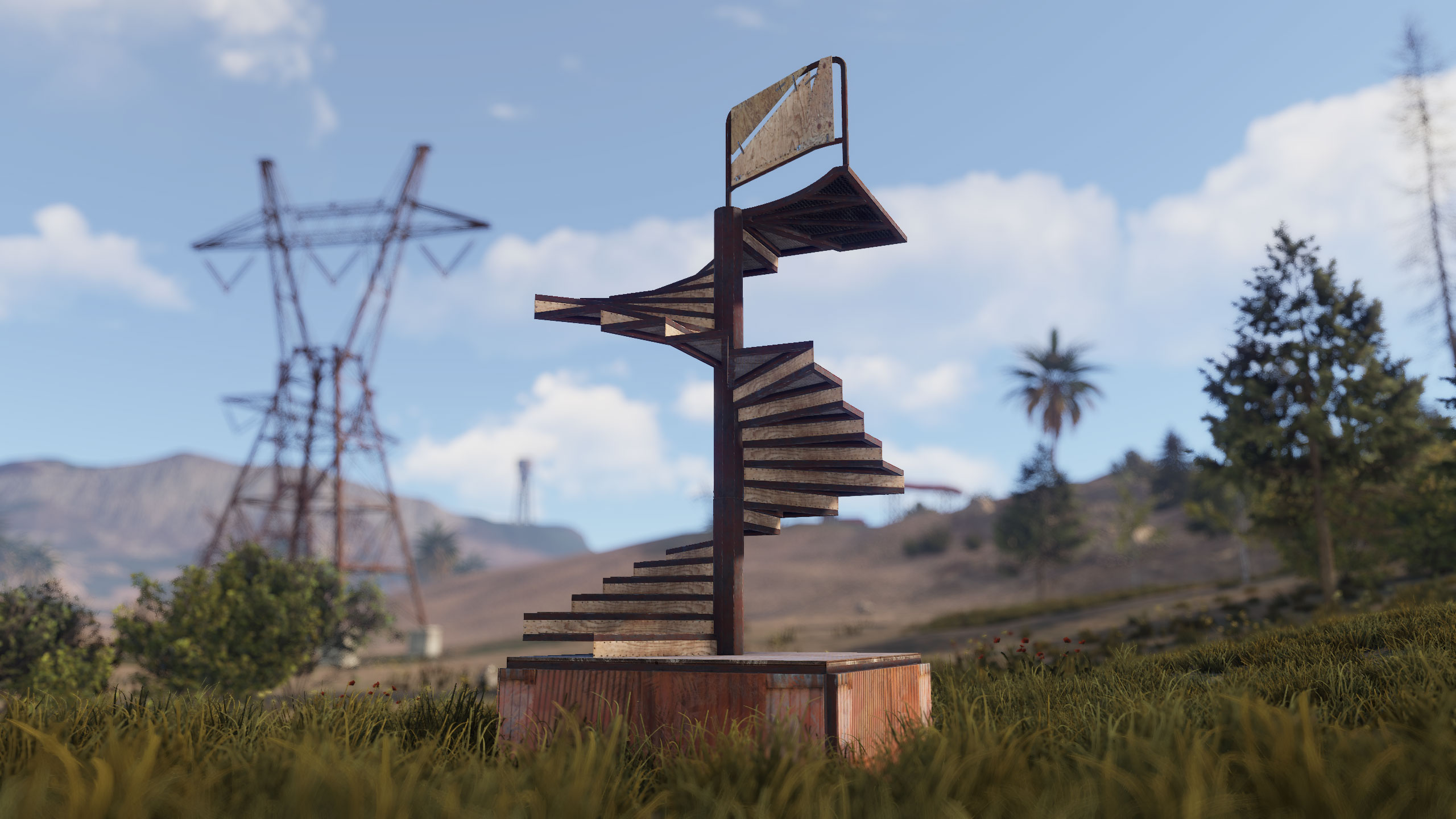 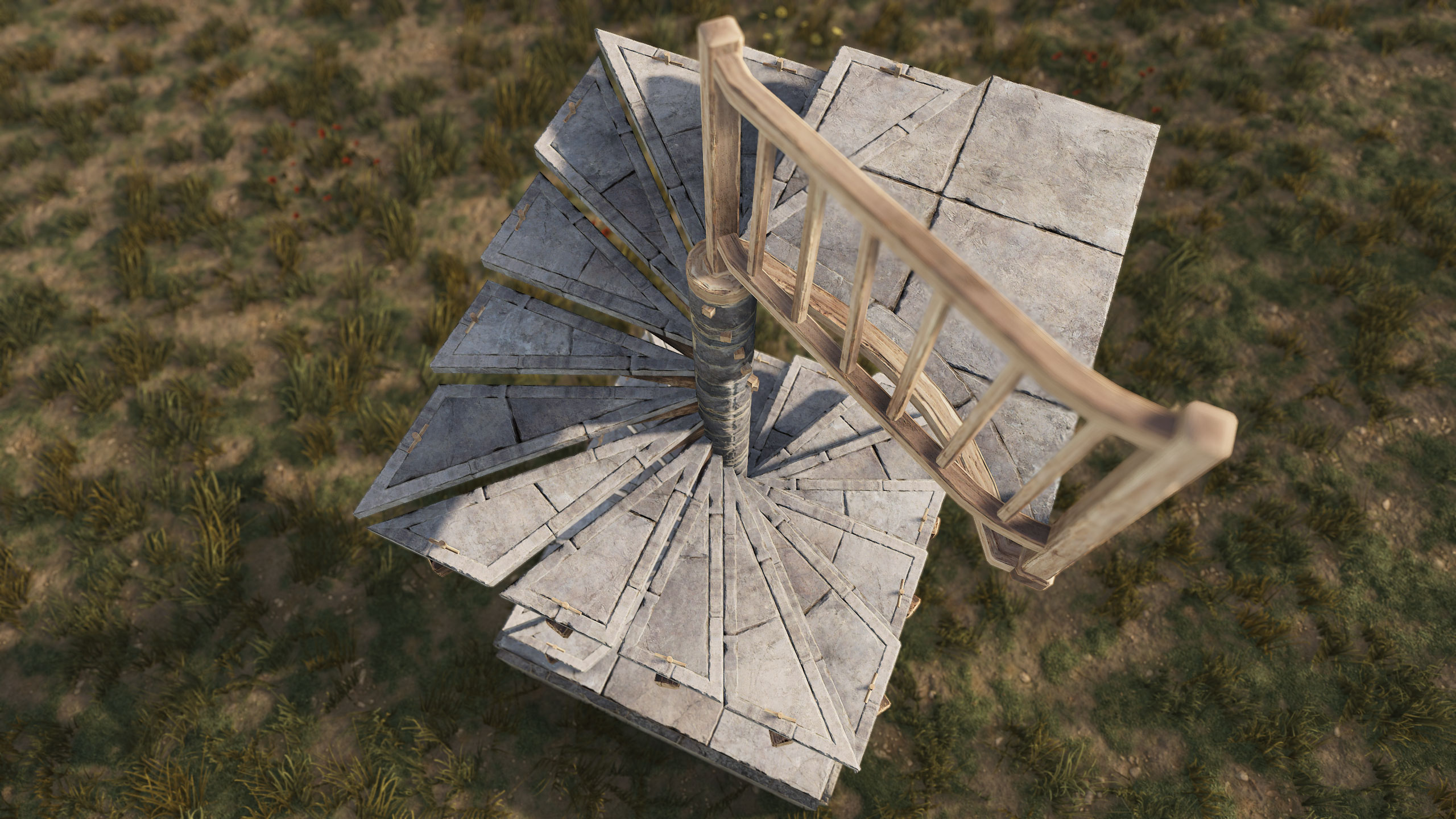 These half height blocks attach to foundations or floors to build spiral staircases that are often nicer to navigate than the old U and L stairs, which are of course also still in the game. They can be stacked to efficiently traverse multiple floors. The triangle stairs take up a footprint of two triangles as they stack. 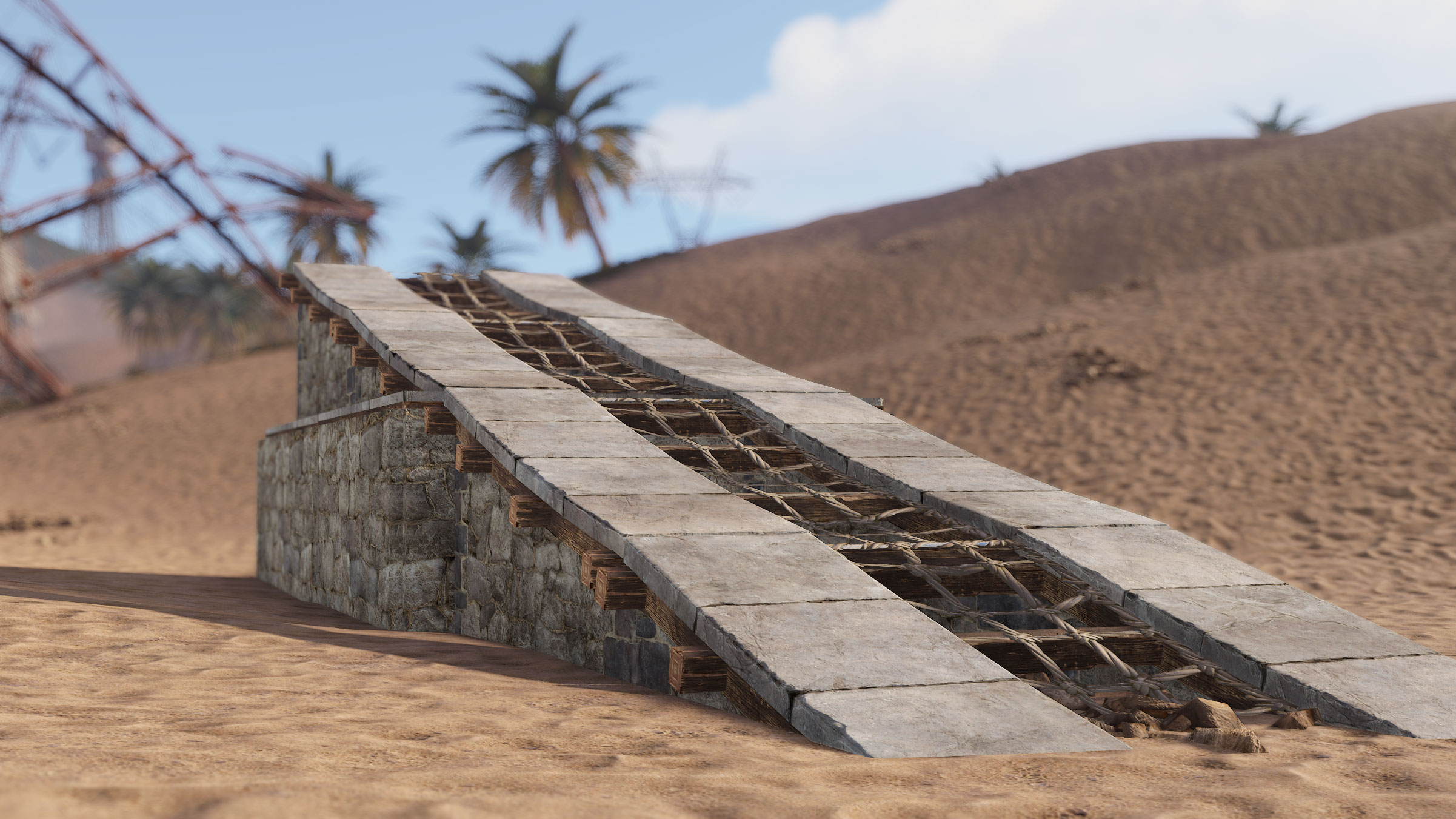 Ramps are quarter height building blocks with a slope that is easy for vehicles to drive up. 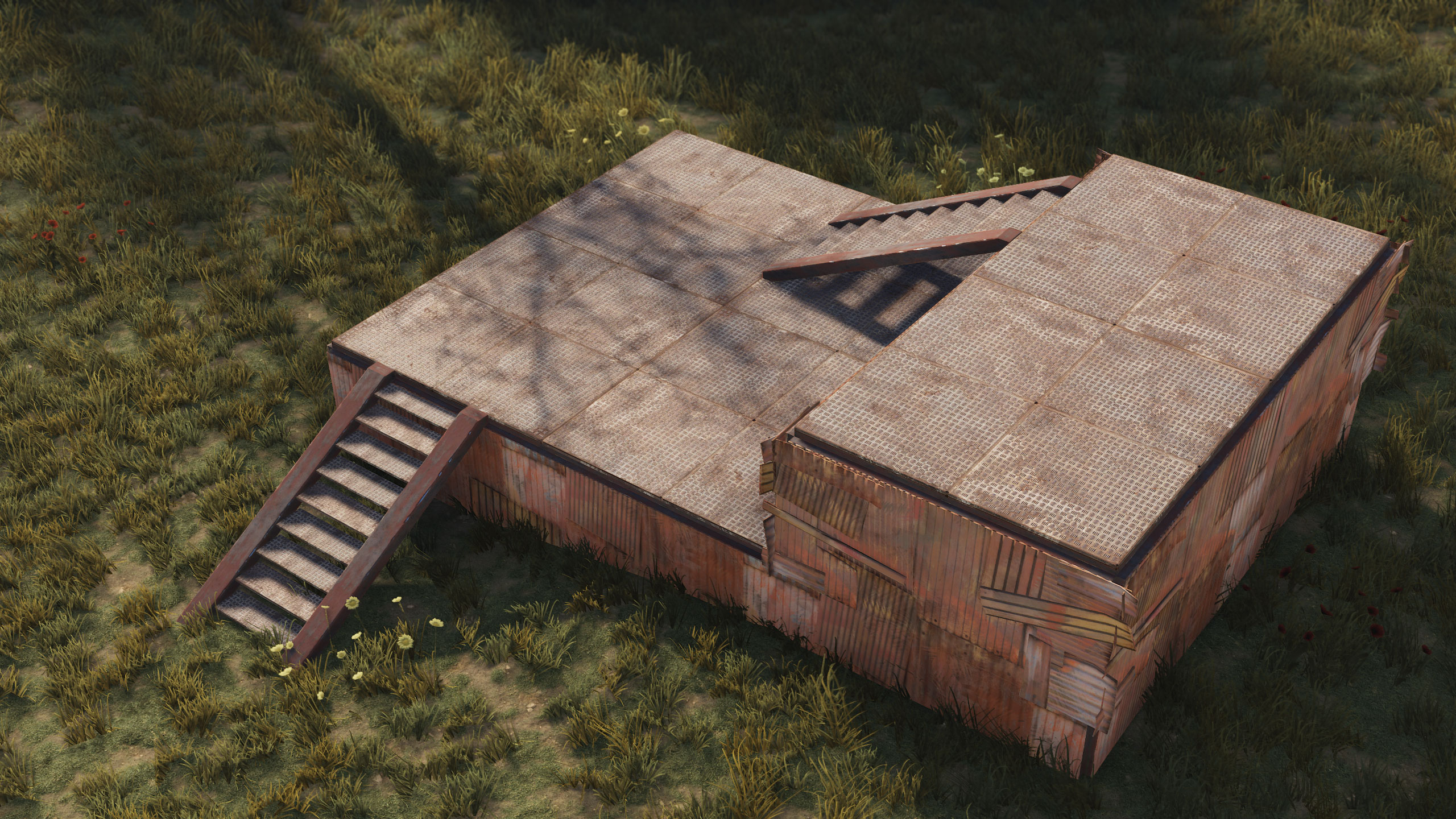 Placeable similar to ramps, these half height building blocks allow you to move from one level to another with ease. They replace the old foundation steps but are no longer considered foundations by the build system and will therefore need a foundation or floor to attach to or they will collapse. 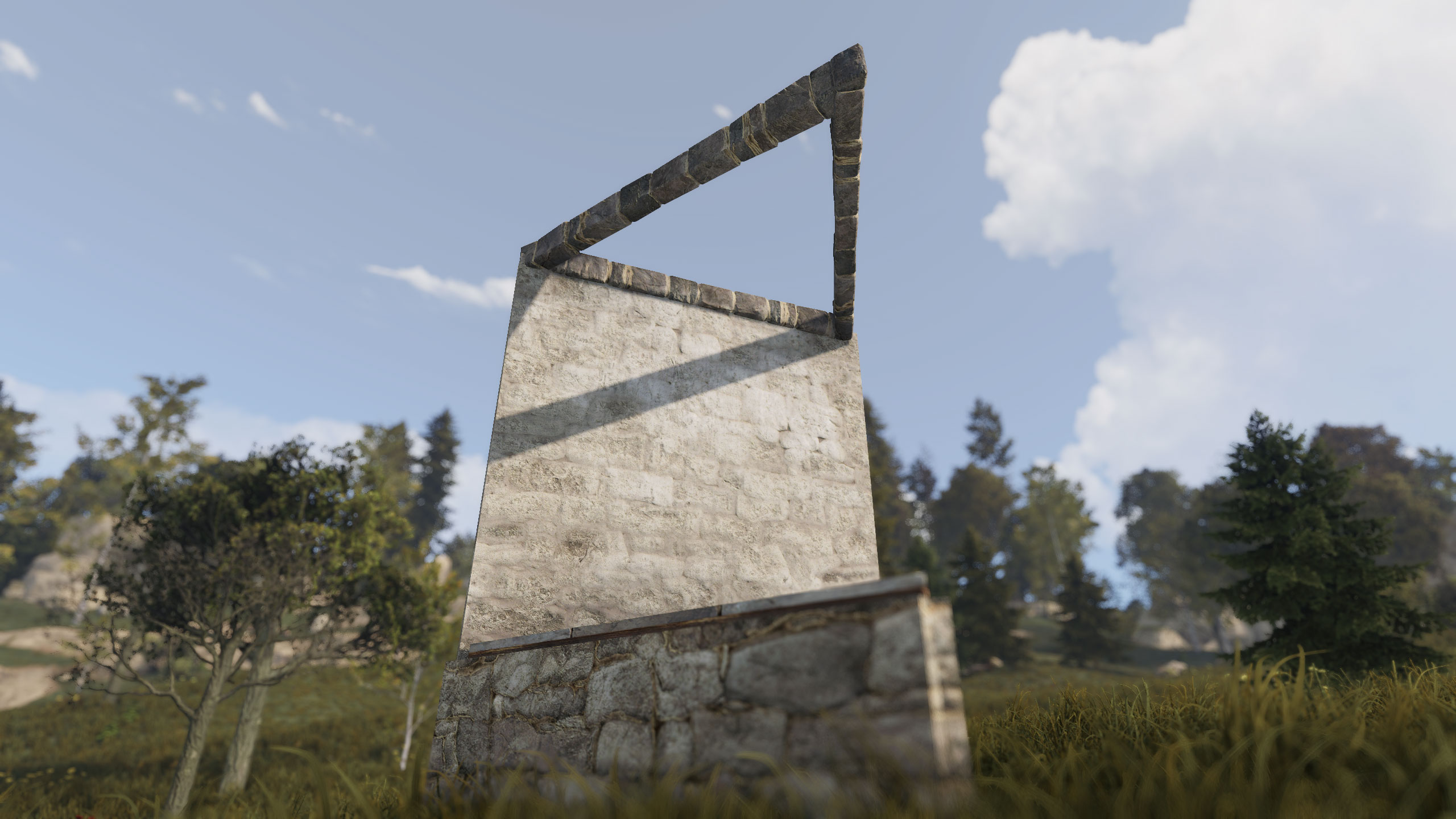 Works just like the square ladder hatch, but has a much smaller footprint. You guessed it: a floor grill in triangle shape.

Conditional Wall Corners
With the new building blocks allowing your creativity to flow freely, we also added some visual improvements to your buildings. Walls will now show conditional corner pieces wherever they make sense visually. This gives bases much less of a "player built" look. We've seen quite a few bugs with 3rd person weapon attachments. These have included things like scopes clipping ironsights, or being offset from the model in general. This month I've gone through all weapons & 9 attachments each one supports. Here's some before & afters: It's a button. Nothing smart about it. You can press it and it will allow electricity to flow through it for five seconds.

Weapon view models (the gun and arms at the bottom of your screen) are now scaled based on your field of view setting. This solves a bunch of clipping issues when playing at a high fov and means that we can be confident when creating a new weapon view model that players will see the animations as intended.

If you prefer the old behaviour you can disable this new scaling by setting graphics.vm_fov_scale to off in the console.

There were also some issues with weapon models clipping into the camera when playing at an ultra widescreen resolution, this has been improved this month by shifting some of these weapons forward when aiming down sights. There are still a couple of instances where clipping still occurs, but they should be less noticeable. The new Modular cars are nearing completion, and are now available to the public for testing in a separate branch of Rust Staging. More information can be found on the earlier blog post here.

Horses were producing way too much dung previously, which lead to players hoarding all the horses on a server and making dung farms. Whilst a cool idea, it's not that great for everyone else on the server if there are no horses going spare.

Horses now produce a lot less dung, a lot less frequently. They also now convert calories to dung so they will require feeding over a period of time before they will produce the goods.

Since January of 2014, developers such as Wulf and Calytic have been dedicating their time toward developing Oxide & uMod. for Rust, and its continued development, maintenance, and support depends on the community!

Now if you haven't heard of either of these projects in the past decade or more get out from under that rock! These projects modify what Rust servers can do, enabling the many thousands of them to provide you with all your favourite things such as kits, more resources, gamemodes, events, custom skinning, Discord integration, and much more!

But what is uMod? uMod is a re-write and modernization of Oxide, with an expanded focus on universalization, standalone tools, advanced patching, additional options, extensive performance improvements, and beyond. Tl;Dr - it's better than Oxide in nearly every way.

This Garage Door skin was designed to help support the Oxide and uMod projects, with 100% of proceeds from this skin going directly to their development team.