We've added a mixing table to create teas which provide time limited boosts as well as other items to craft, conditional roof tiles, a wooden barricade and an armoured passenger module for the vehicles along with various other fixes and improvements. 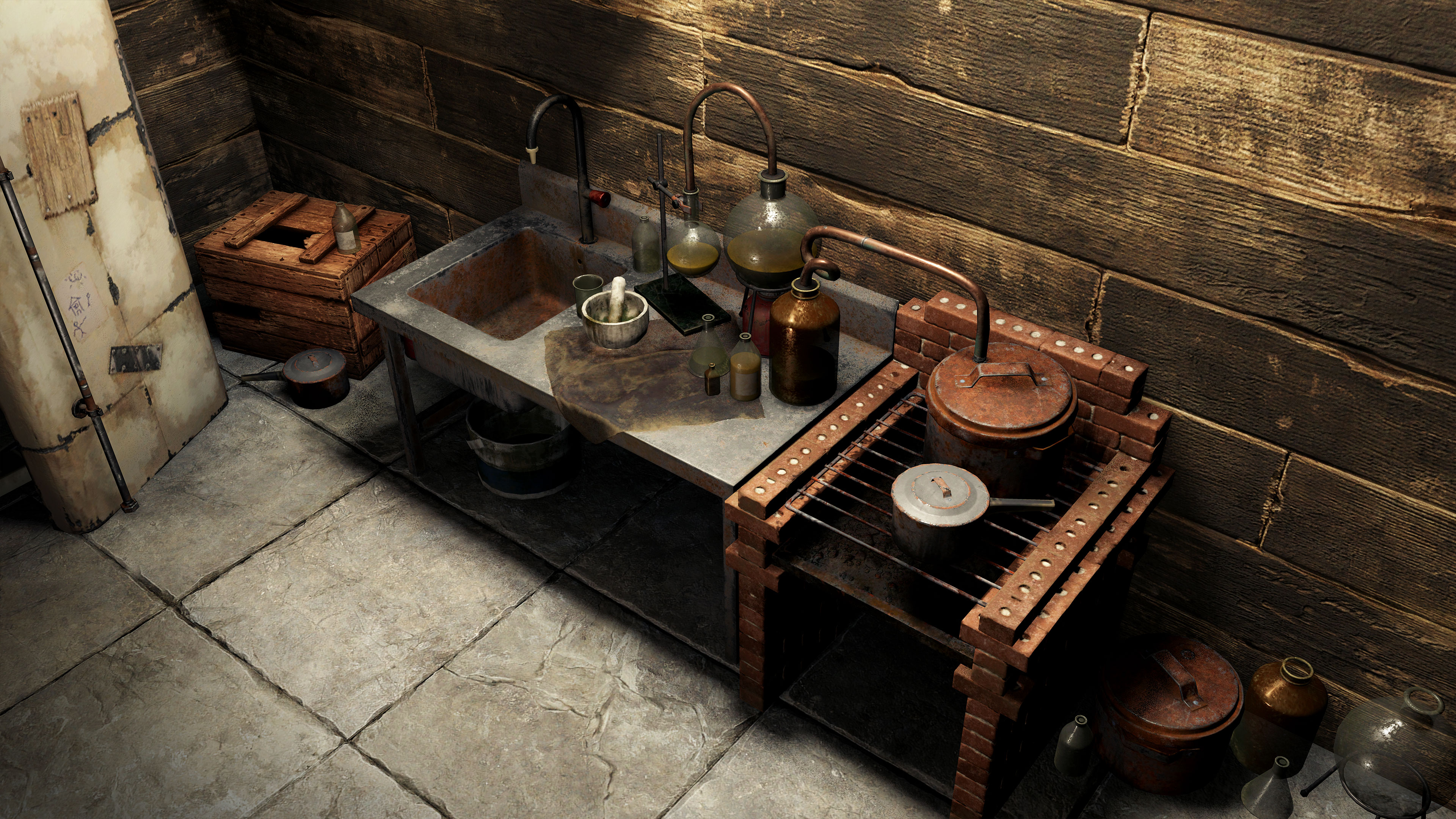 The mixing table is a new deployable that lets you mix items together to create new items. Ingredients must be placed in the correct order and quantities that match the chosen recipe. 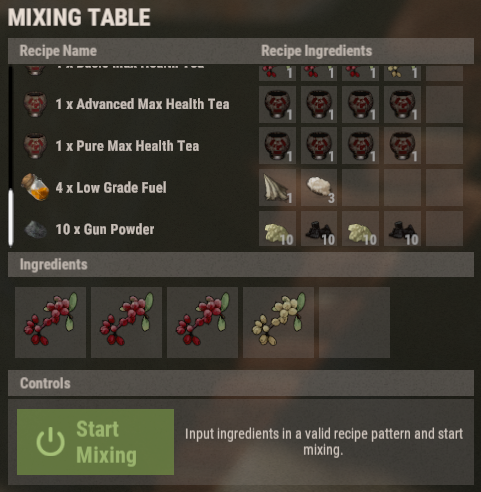 The mixing table is primarily used to mix berry recipes into a range of new tea items, but it can also be used to create explosives. 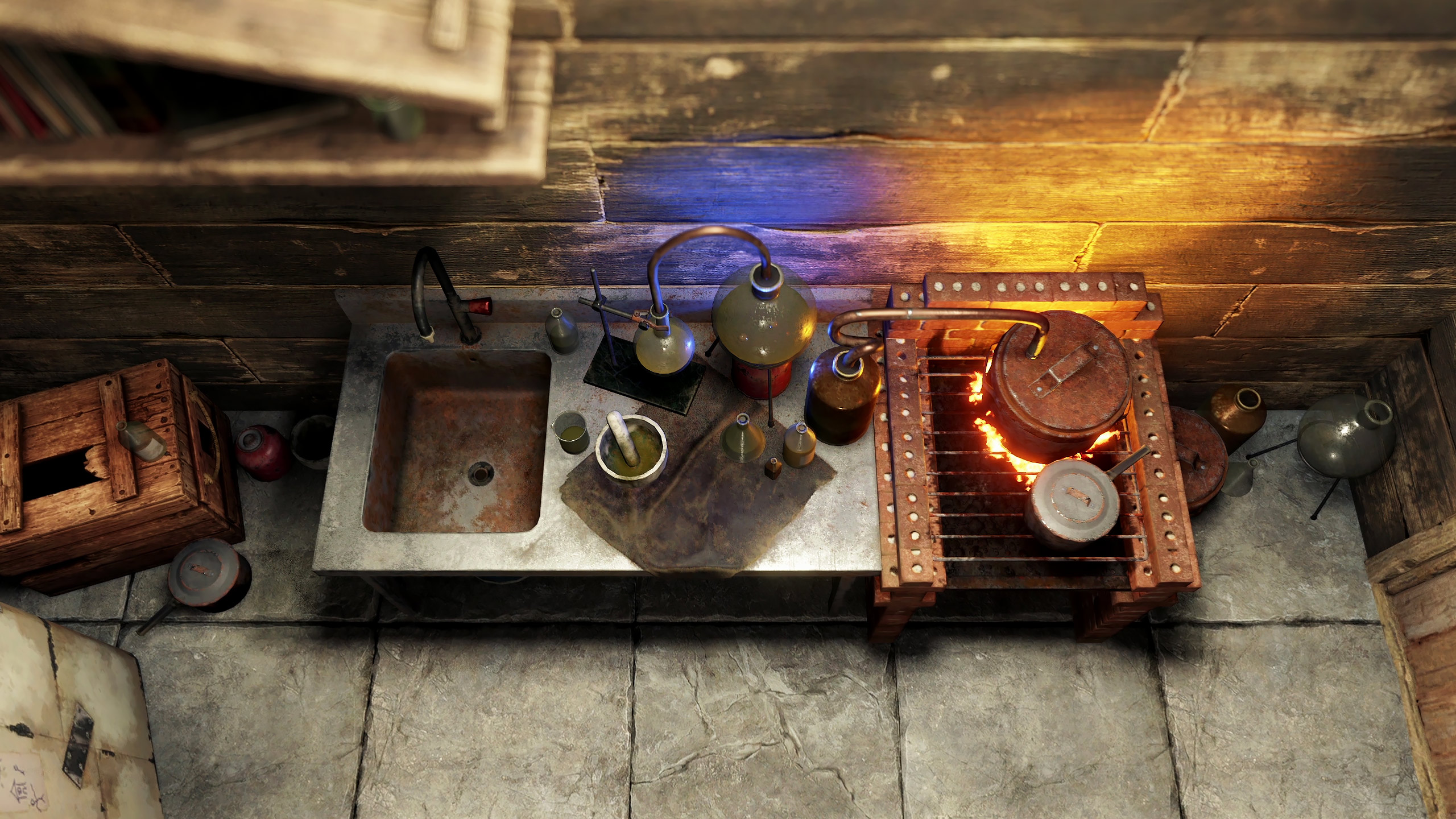 Berry Plants
I've added Damian's different coloured berry plants to the game, all of which can be found in the wild or grown through the farming system.

The berries restore a small amount of calories and hydration, but their main use is as ingredients for the new mixing table tea recipes. 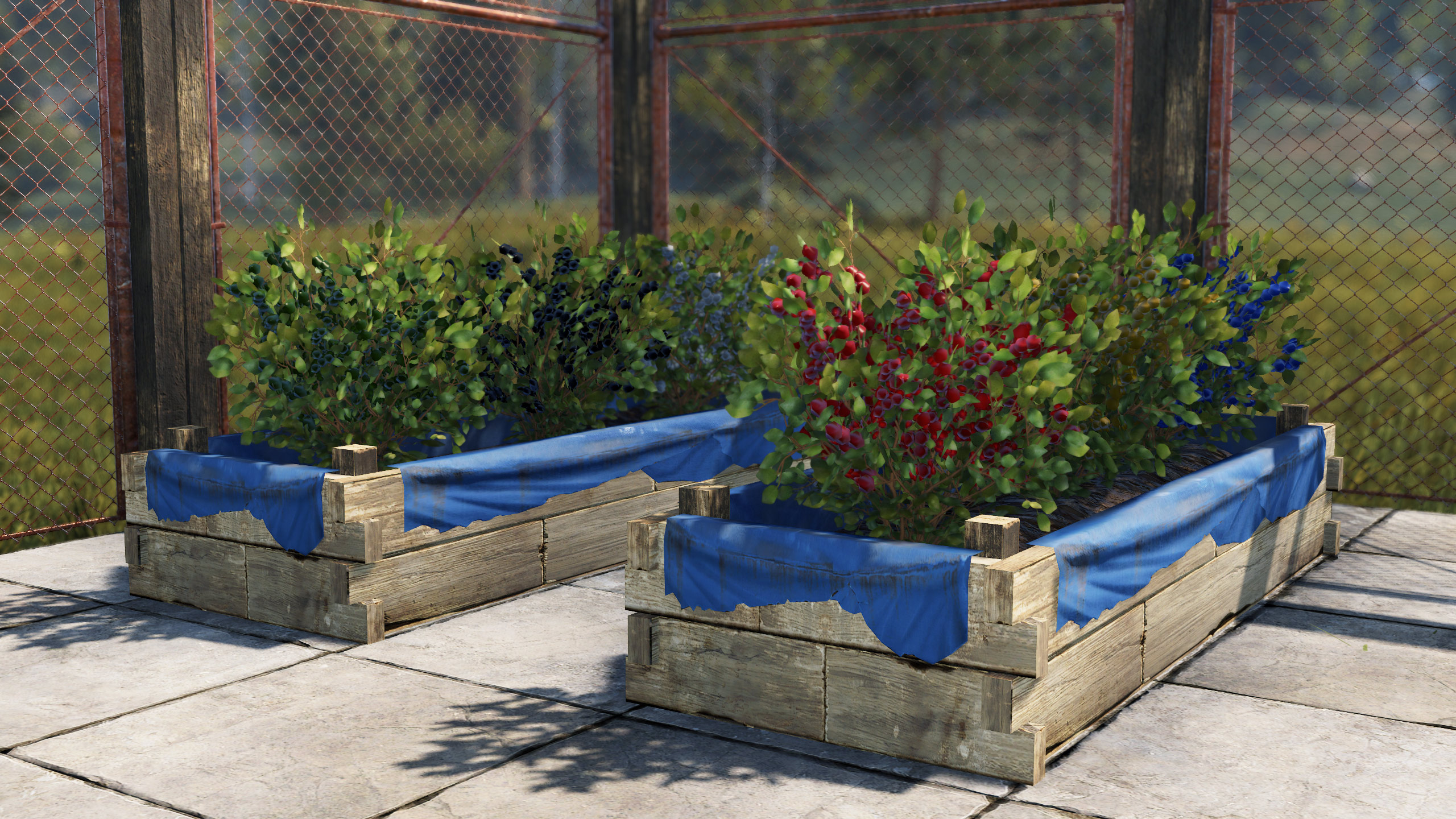 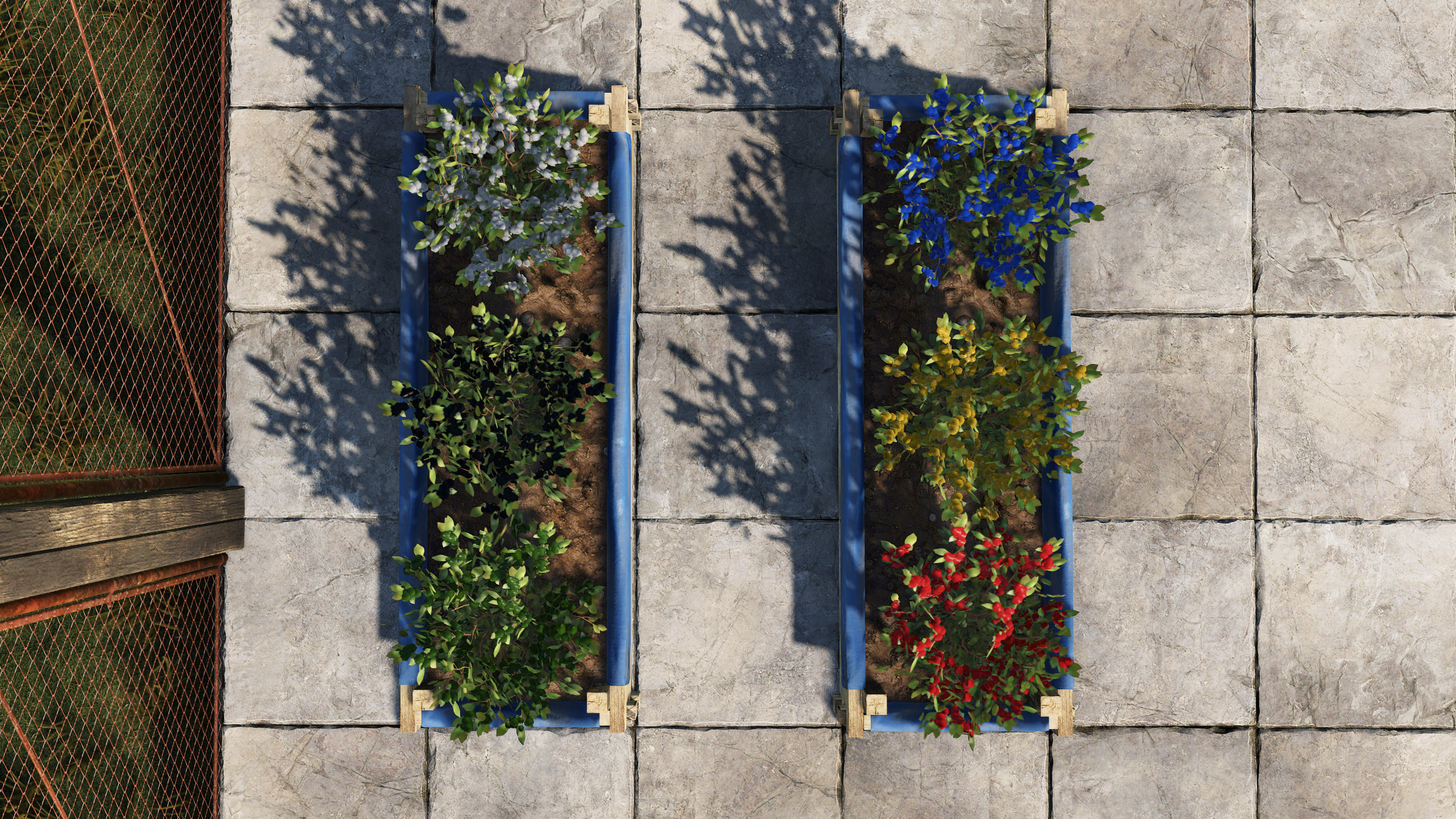 Boost Effects
To allow for the the various modifier effects of the new tea items, I added a new Boosts system. This lets items add stat modifiers for limited durations and shows all the information in the UI.

You can see further information by hovering the new Boosts icon on the character screen. This will list any current boosts, their values and their remaining durations. 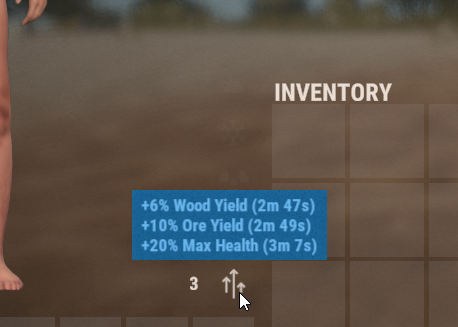 Teas
Teas are a new set of items that grant limited duration boosts, and are created using the Mixing Table.

There are eight different kinds of tea, each with three tiers: Basic, Advanced and Pure. Each tier has a stronger effect than the previous tier.

Wooden Barricade Cover
For the Rust legacy veterans, you should recognize the following, introducing the Wooden Barricade! This new deployable provides great cover during firefights and decays rapidly when placed outside of building privilege. 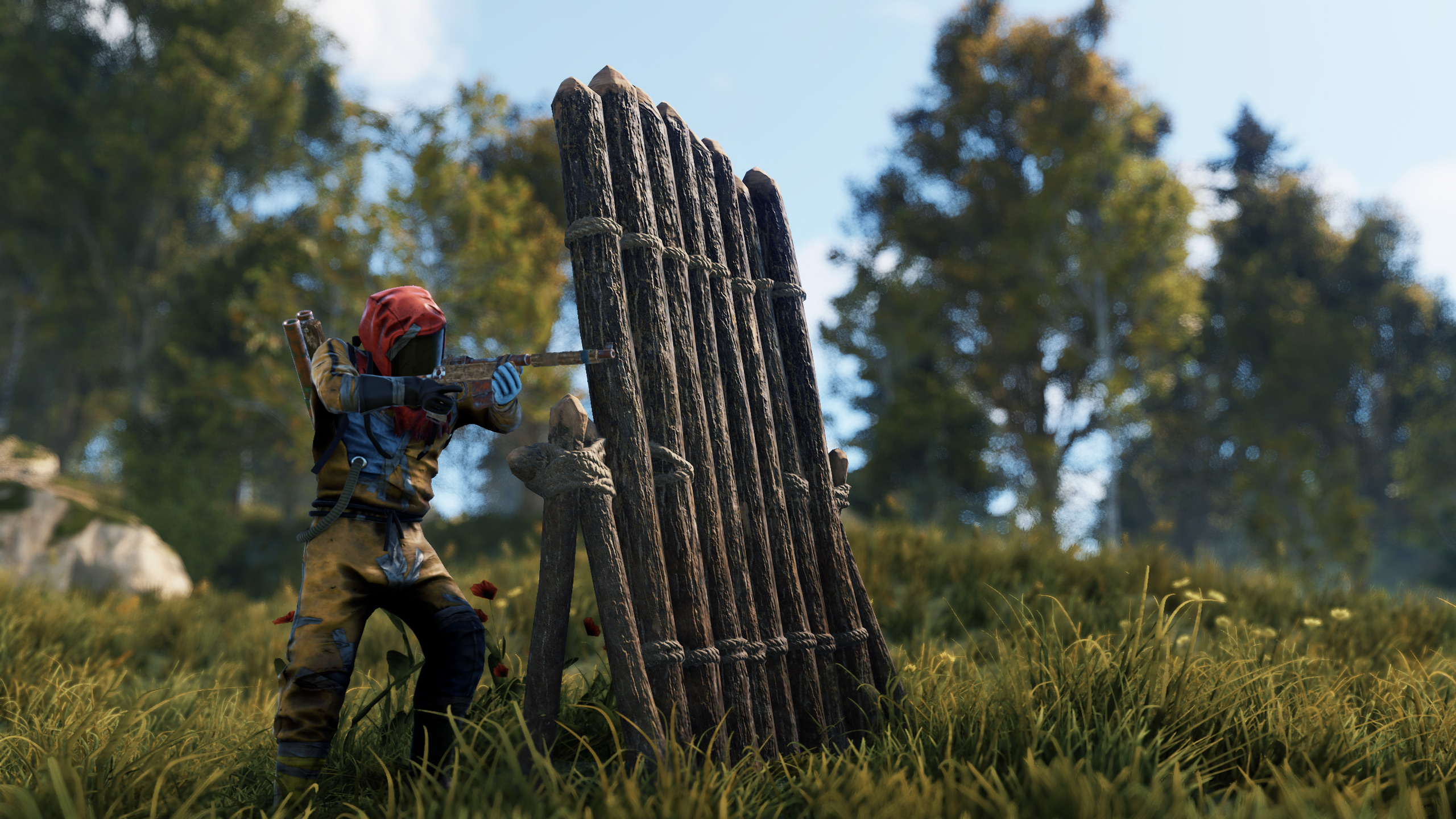 We'll be monitoring how players use these compared to the existing external walls during firefights, if players still prefer external walls we'll look at making further changes to discourage external wall placement during PvP. 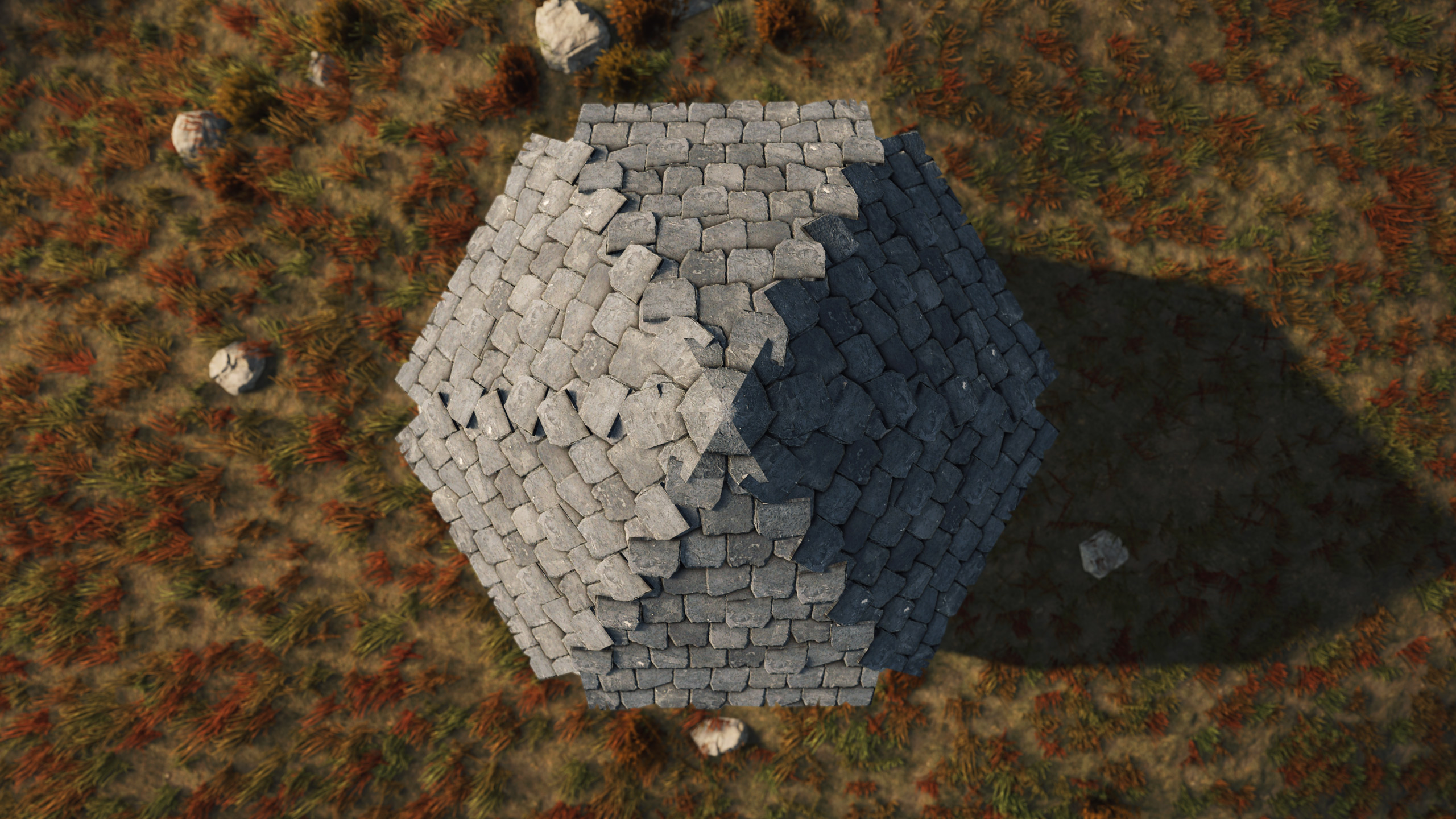 This month sees the introduction of new roof corner models. For the longest time the only option has been a straight roof. It felt like we had the tools and time this patch to expand on that a little bit.

While this is a vast improvement over what was available it’s not a magic one click solution for your roofs. There are limitations at play within the building system which meant not all imaginable roof case could be covered.

The new system will fill in corners be it concave or convex depending on the surrounding roof blocks. It also sees the introduction of a triangle roof block which you should be using whenever you are building roofs above a triangle footprint to ensure the best roof continuity across your base. 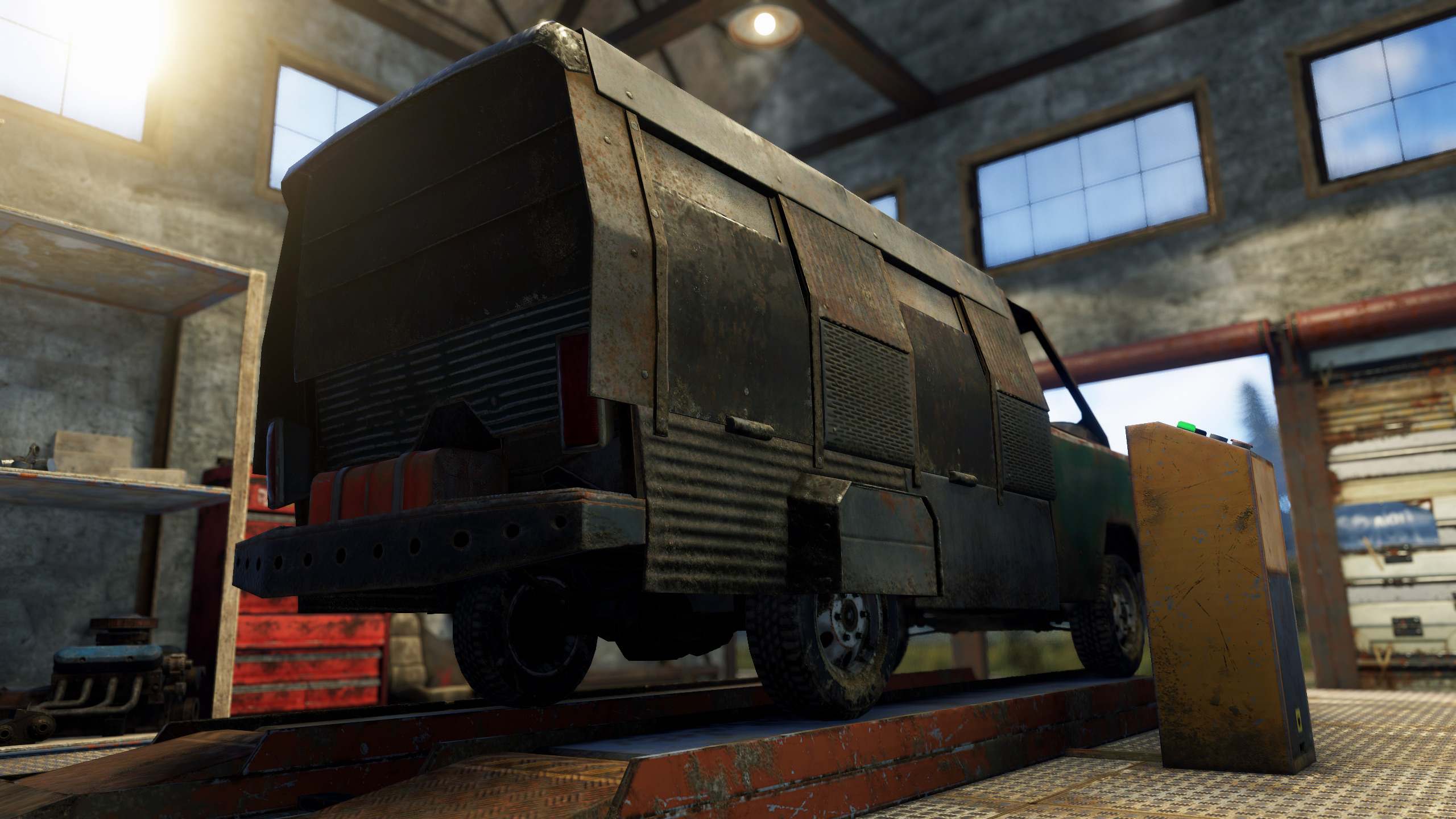 The armoured cockpit module has also had a visual update to better differentiate it from the new passenger module. General improvements
The vehicle lift bounds have been updated so it can now fit in a T-shaped area. Cars on a powered vehicle lift will no longer decay at all, and I've fixed a bug that affected all vehicles where the inside/outside check could return the wrong result, so parking inside should now always correctly slow down the decay rate. Engine internal items will also no longer decay along with the car, so there's no need to take them out to preserve them.

Individual panels now have their own gibs, rather than just disappearing when damaged.

Driving off-road is now more viable (although using roads is still recommended) due to reduced collision damage and reduced damage to engine internal components, plus an improved ability to climb hills.

Collisions with humans or animals now apply a force and damage back to the car itself.

Optimisations
I don't usually write much about the optimisation work I do, mainly because the improvements are usually small, they might only apply to certain users or there's not really much to write about. Alistair asked me to start including them in the blog though in an effort to communicate that performance is something we take seriously and keep everyone in the loop.

Over the last few months we've seen an approx 3ms (30 fps) improvement in performance on our benchmarking machines due to various fixes and improvements that we've found (upgrading Unity, Rohan's UI improvement, etc.)

This month sees another decent increase in general performance. Our benchmark testing machines are showing a consistent 0.5 - 1.0 ms (5-10 fps) improvement depending on the run. The main reason for this increase is the monument hierarchy flattening work. When Unity recalculates render bounds, having deep hierarchies slows this calculation down significantly. There's more we can do in this area (although the results won't be anywhere near as significant) which we'll be including in next months patch after testing.

MIDI Binding
Jarryd recently implemented a MIDI Convar system with a set of commands allowing you to bind MIDI notes to convars in Rust. These functions are only accessible by server admins, however they can also be used during demo playback for cinematic-related controls.

The example clip above shows me operating knobs/sliders on a MIDI controller to adjust convars for debug camera controls, depth of field and time of day. Any MIDI device, such as a MIDI keyboard or controller, should work with this system.

If you don't own a MIDI hardware device, you can instead use a software solution. The clip below demonstrates using a mobile/tablet app to send MIDI notes to Rust:

Visit the MIDI Binding Page on our Wiki for details on how to setup MIDI convar binds.